Due to the incredible continued growth of the indoor marching arts, last fall WGI Sport of the Arts announced a new World Championships format that would debut in April of 2019. In this new configuration, Color Guard and Percussion A Classes will start preliminary competition on Wednesday, and their finals will be held Friday evening.

“We intentionally designed the new format so that groups could keep their trips limited to three days if they wish, as their class of competition would complete the process within a three-day span,” explained WGI Director of Operations, Bart Woodley. “We understand the cost associated with bringing a group to the world championships and made a huge effort not to impact the bottom line for the participants.”

This new arrangement of events will allow additional groups to compete in the preliminary rounds of competition in all classes. Continued expansion of the indoor marching arts is important to WGI, and it is in that spirit the decision was made by the board of directors.

WGI Board of Directors President, Ed Devlin, stated, “As a board, we have been exploring every route possible to serve all groups who wish to compete in WGI World Championships. We do not want to tell anyone ‘NO’.”

Additionally, the new order of competition allows all classes to have only one competition per day. The Color Guard Advisory Board has discussed in great length how only one performance per day provided a much more enjoyable and rewarding experience for their participants. Pressure on A Class percussion ensembles to make such a frantic turn-around from their semi-finals into finals performance, which were previously held the same day, will also be alleviated.

Don Click, a member of the WGI Board of Directors stated, “One performance per day allows you to have time to make sure your performers are well rested and mentally ready to enjoy their WGI finals experience.”

For the Color Guard division, this revised format has the added goal of attempting to finish all other competitions before A Finals begin. Audience size at A Finals has been the topic of much discussion since the move to Wright State University’s Nutter Center in 2016. At the May 2018 Advisory Board Meeting, the Color Guard Advisory Board voted to hold A Class Finals at the University of Dayton Arena. Final approval will be determined by the Board of Directors at their annual meeting in July.

Other considerations in adopting this new championship timetable were the increasing challenges of travel for groups to Cincinnati and Kentucky, as well as the availability of venues in and around Dayton.

“As much cooperation as WGI receives with all the arenas in southwest Ohio and northern Kentucky, we must accept that there will be unexpected interruptions in availability due to renovations or other university activities. We have a unique relationship with UD Arena as they have planned their renovation around their basketball schedule as well as our event. We are very fortunate that our primary championship site considered WGI as they made their renovation plans,” said Ron Nankervis, Executive Director. “In addition to venue availability, the time and distances some groups are having to travel to participate is a major consideration in the quality of their experience. All our internal surveys reinforce that the more we can do to centralize events closer to Dayton, the more it should lower costs and stress on participating groups. This new format achieves some of those goals.”

This new format will not effect the Winds World Championships schedule.

WGI is looking forward to this change at the 2019 World Championships and is excited to experience continued growth of the Sport of the Arts! 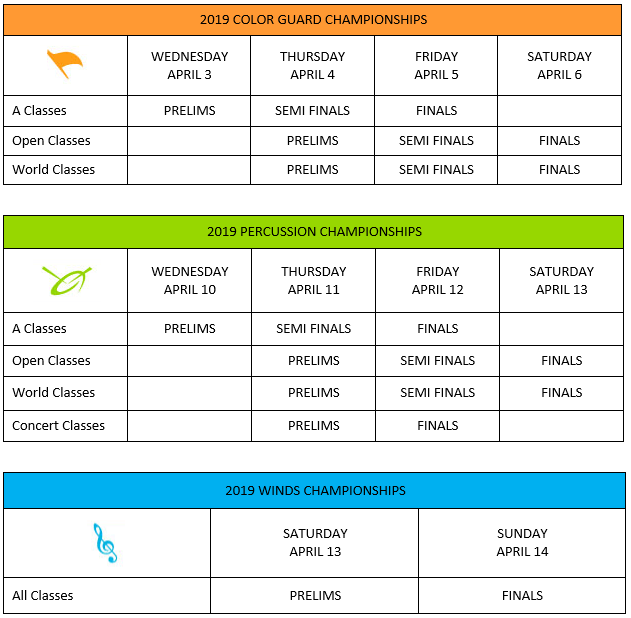