The year is 2015. Winter Guard International has just announced a new category of competition, Winds. Fast-forward three years later – the year is 2018. The program has rapidly grown. With 48 Winds ensembles registered for World Championships and 65 groups competing nationwide, my curiosity was peaked. I wanted to know more about the origin of this flourishing program, what makes Winds unique, and the impact the division has had on the music world. I gave Wayne Markworth, WGI Director of Winds, a call to get some answers to my questions about the flurry of entries surrounding this activity.

In the years prior to 2015, according to Wayne, various people within WGI had expressed an interest in the formation of a Winds Division, but interest alone wasn’t enough to kick start a new revolution in the world of indoor marching arts. There needed to be something more. That something more was a survey distributed to members of various WGI percussion and color guard groups. This survey revealed that over 20% of these members’ primary instruments were in fact wind instruments. But this survey revealed something more than simply a number; it revealed that WGI had a surplus of talented, passionate, and dedicated individuals stuck on a rowboat with no oars, with no group dedicated to their primary instruments. This survey acted as a catalyst for the revolution that would soon be known as WGI Winds. 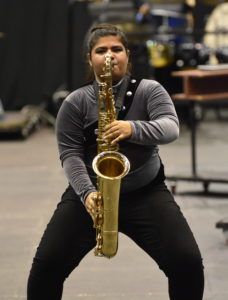 With a better understanding of the creation of the Winds Division, my next question was more complex. What differentiates winds groups from percussion and color guard groups? As Wayne explained in percussion groups, there’s more or less a standard instrumentation: battery and front ensemble. In contrast, winds groups do not have any specific instrumentation. In fact, there are purposely less regulations and restrictions against winds groups, at least in regard to instrumentation. These less stringent rules exist in order to encourage experimentation. One winds group could be entirely made up of brass, another only of woodwind instruments, and yet another a mixture of both woodwinds and brass. Winds groups also often incorporate percussion elements and guard elements into their performances, resulting in a unique mix of electric synergy.

Aside from the freedom of instrumentation, winds groups also must take a unique concert band approach to their rehearsals and performances, diverting from the traditional marching band approach. In a concert band approach, the focus is on producing a more precise and controlled sound. In contrast, in a marching band approach, the focus is on producing a full and exaggerated sound. The reason for this difference is simple. In fact, as Wayne stated, “It’s right in the name. Indoor.” Marching bands practice and perform almost exclusively outside, thus their sound must be able to carry into the audience, despite their expansive surroundings. Winds groups practice and perform almost exclusively indoors, thus their sound has a smaller distance to travel, resulting in less of a need to project. 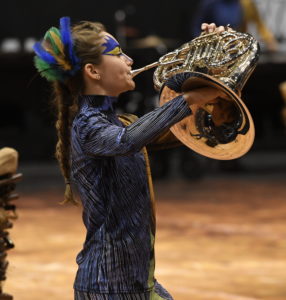 With my questions about the formation and the differentiating aspects of winds answered, I only had one question left: what has been the impact of winds? First and foremost, winds groups are so important because of the impact they have had on the band programs of small high schools. Wayne demonstrated this point with a short example. Take a band from a small high school. They only have fifteen kids in their marching band. It’s pretty hard to create an engaging and expressive marching show with fifteen kids. But, take those same kids and place them in an indoor winds group. What was once a disadvantage is now an advantage. These kids, from that small high school, are able to have a successful experience with indoor, where their experience with outdoor might have been less satisfying. Successful in this context doesn’t necessarily mean winning. It means building musicality, fostering a sense of community, and most importantly, having a great experience. In fact, all directors have actually seen growth in in their band programs after introducing an indoor winds group.

Winds groups not only affect the band programs, but they also directly affect the students/performers in them. When one marches outside, their audience is, for the most part, faceless. It’s almost impossible to pick anyone out from the crowd. But, when one marches indoors, one can see every face clearly, allowing a performer to connect more strongly with their audience, their fellow performers, and finally, the performance itself, renewing their love for musical expression.

This indoor revolution, which started from the humblest of beginnings, will only continue to spread its reach to all corners of the United States and the world. Using music as its most powerful tool and ally, the only question remaining is where will WGI Winds go from here?