The Fan Favorite award has become a beloved part of WGI finals, allowing both spectators and performers to cast votes for their favorite ensembles via text message. Procuring votes through social media and sharing group numbers are all part of the fun, involving viewers even if they can’t make the trip out to Dayton. The tradition started in 2010, and since then two ensembles have become recurring fan favorites—Dartmouth High School’s Indoor Percussion and Winter Guard. 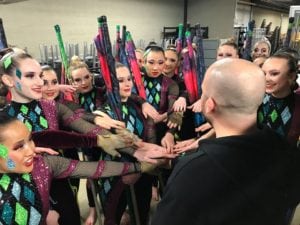 Based in Massachusetts, the percussion ensemble competes in Scholastic World and is directed by Thomas Aungst, with shows designed by Darcie Aungst. They have received Fan Favorite every year since 2014, with productions featuring Marie Antoinette, the Beatles, clowns, and dolls come to life. The Winter Guard, directed by Addison Kaeterle and designed by Anthony Cabral, is similar in its productions, with a strong basis in characters and storytelling. The guard has been a fan favorite every year since 2016, with the shows “#Gossip,” “Bioluminescence,” and “Lilith of Eden.” They competed in the Scholastic A division until 2018, when they were moved to Scholastic Open.

It is quite a feat to have consistently appealing shows, and even more so when they come from the same school. To learn more about what makes the Dartmouth program so special, we talked to directors Thomas and Addison about their production processes.

In the beginning of the Aungsts’ involvement with the Dartmouth School Music Association (DSMA) in the 90’s, they would start with musical selections and build concepts, costumes, props, and visual themes based on the style of music. Over the years they have reversed the process, beginning by choosing a theme, storyline, or historical event that will resonate with the performers and audience. Once the concept is brainstormed and finalized with the design staff—drill writer Jeff Sacktig, visual technician Mike Rayner, and pit book writers Jason Medeiros and Brandon Carrita—Thomas will begin searching for music to fit the story. The right pieces of music are sometimes found instantly, and sometimes the search can last for years. 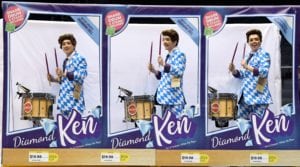 Their aim is to create a show with many layers, while also being universal enough that a spectator with no knowledge of WGI will still be entertained. “Usually our shows have an in-your-face, obvious, overall theme that everybody ‘gets’ or understands,” Thomas says. “We then layer in double, triple, quadruple entendre. For example, this year’s show was ‘Out of the Box.’ Many people who watched the show connected their childhood experiences with Ken and Barbie Dolls or other Mattel toys. There were visual elements that connected you to those things…The deeper meaning behind the show was to think outside the box, be yourself, don’t let people define you and your role in this world—do the unexpected, come to life, be you!”

Thomas attributes Dartmouth Percussion’s individuality to their coordination between the music, themes, costuming, choreography, and character play. Much of their success is also due to the members’ families and the DSMA, who build the famously elaborate props and costumes. Everything from the wigs, bearskin hats, face makeup, and light-up backdrops is hand made or designed.

Even with so many repetitive wins, the staff doesn’t consider placements or titles when designing, but aim to give their students a show they can “max out” and perform with pride. More like a cherry on top, “winning Fan Favorite has been extremely rewarding because it means that we reached our goal of connecting our show to the audience.” 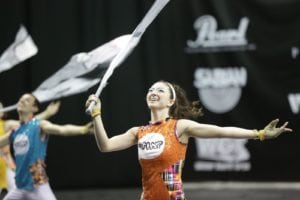 On the other side of Dartmouth’s program is the color guard, the ensemble steadily growing since Addison’s involvement in 2012, the first year they traveled to Dayton. The design process has remained the same throughout the years, with two main considerations: the students’ interest in the program and whether or not the audience will be able to relate to it.

Their 2016 show succeeded in both these aspects, exploring the consequences of gossip on social media. Complete with glittering uniforms, death drops, phone ringtones, and shifts in character, the first Fan Favorite win still came as a shock, adding some pressure to the design process.

In thinking of ways to be even more creative, the 2017 show “Bioluminescence” featured costumes that lit up with the push of a secret button. A parent sewed the wires, batteries, and lights into each costume, allowing the transition from dark silks and tones at the beginning of the show, to the performers glowing at the finale.

Each show has a clear narrative arc and attempts to go beyond a surface level meaning. Addison elaborates: “We teach out students that they are storytellers. We make sure they know that this show could mean more than just what we think to someone. We want the audience to be on the ride with us and bring it back to their own life.”

The Dartmouth program’s staff and students are a testament to all the dedication that goes into performing and storytelling. As they continue to entrance the crowd with their shows, we look forward to what they come up with next. 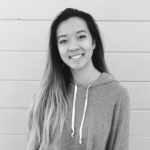 About the Author: Mai Tran is a student at New York University, studying English with minors in dance and American Sign Language. She writes for several on-campus publications and is a volunteer editor at October Hill Magazine. Originally from southern California, she has performed with the Pacific Crest Drum and Bugle Corps and Alter Ego Winter Guard.