Every summer, the Emmy and Tony award-winning show Blast! tours Japan, utilizing percussion, brass, and a visual ensemble (VE) to create shows. We spoke to three WGI performers who went on tour with Blast! the music of Disney in 2019, to learn about their experiences.

Read Part II of the Q&A feature, focused on tour prep and taking the stage, below! And check out Part I at bit.ly/wgiblast1.

How did you prepare for the tour, and what were rehearsals like? Did WGI experience help prepare you, or is the indoor performance aspect completely different?

Megan Smith: Preparing for tour was vital, and we learned that rather quickly once we arrived in Japan. The weightlifting and running I had done prior to Japan truly helped my endurance when it came to running the show down day after day. Even throughout our six-week rehearsal period, we would run on our lunch or dinner breaks. The best way for me to describe rehearsals the first few weeks was that they felt like winter guard design camps—but instead of just the weekend, it’s 12-hour rehearsal days with one day off. This was for about four weeks, until the time for “Tech” came along. Tech was about ten days. On the first day of tech, they reveal the stage with the band bridge to us…one of the most magical days of tour. It’s similar to opening up a new winter guard tarp. It absolutely felt like Christmas. 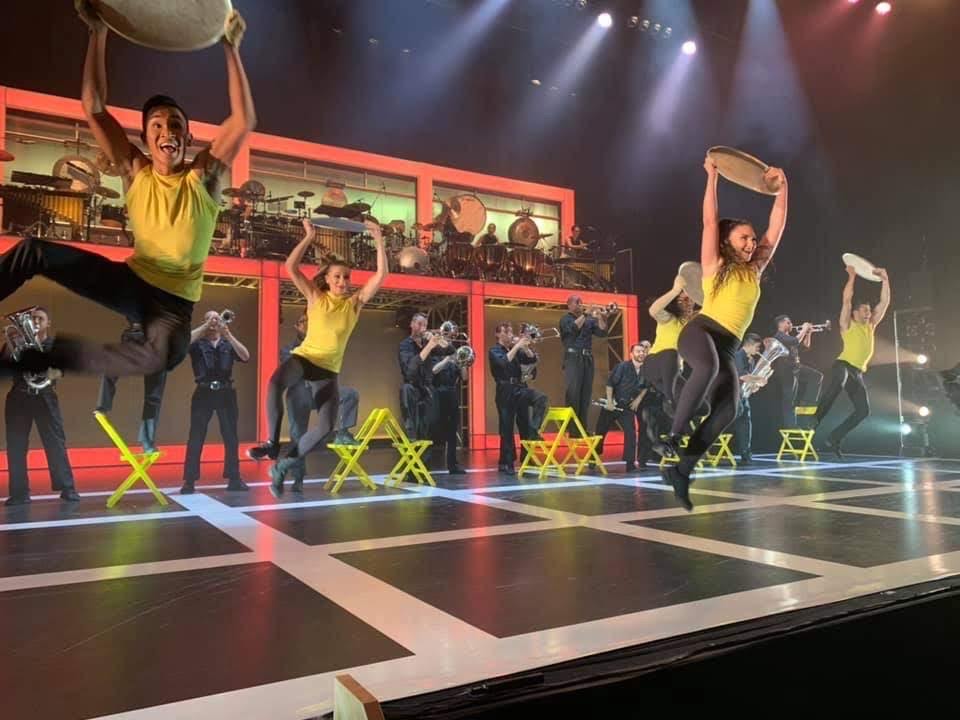 Tanner Wetzel: Because of the physically demanding nature of the production, the color guard staff advised us to be in peak physical condition when we arrived in Japan. From lifting partners to spinning unfamiliar heavy pieces of equipment, I soon understood why the staff was so insistent upon members being in great shape.

Although my years performing in WGI absolutely helped prepare me for Blast!, it was an entirely unique experience of its own. The word “performance” was seldom used because what the cast did was much more than perform—it was acting. The members at Blast! do an amazing job at taking a role and making it totally their own while still exceeding the high standard of musicianship required to put on a production like Blast!.

Vance Anderson: As part of the “Welcome to Blast!” phone call with the staff and the other cast members of the Visual Ensemble, we were highly encouraged to take dance classes, keep our physical fitness at its best, and keep up with our equipment technique. They emphasized the importance of coming to Japan ready to start learning a show. As opposed to a season in WGI, a team usually has a couple of months of pre-season to solely work on technique and really solidify the ensemble’s technique to minimize discrepancies from person to person. With our “move-in” date to Japan being only a month and a half after WGI World Championships it was our responsibility to keep ourselves in tip-top shape.

The rehearsal period was about six weeks, broken down into two parts. A four-week period where we learned the show—staging and choreography; and a two-week tech period where the stage is set just as it would be for a show and the sound, lighting, and wardrobe teams arrive to put all the remaining pieces together. Much like a day of rehearsal during winter guard, we would start early in the morning and end around 9-10 p.m. with multiple breaks paced in-between.

WGI definitely aided in being prepared for an opportunity like this. The high pressure of performance and the strong work ethic in rehearsals is something that goes hand-in-hand between the two. If anything, our role in Blast! feelt much more front-and-center—just because of how much smaller the cast was in comparison to typical marching arts groups like a WGI or DCI group.

Keep an eye out on our feature stories next week for Part III!

Mai Tran is a student at New York University, studying English with minors in dance and American Sign Language. She writes for several on-campus publications and is a volunteer editor at October Hill Magazine. Originally from southern California, she has performed with the Pacific Crest Drum and Bugle Corps and Alter Ego Winter Guard.