Congratulations to all of our 2022 Winds World class finalists! View a recap of their productions below in order of Finals placement. 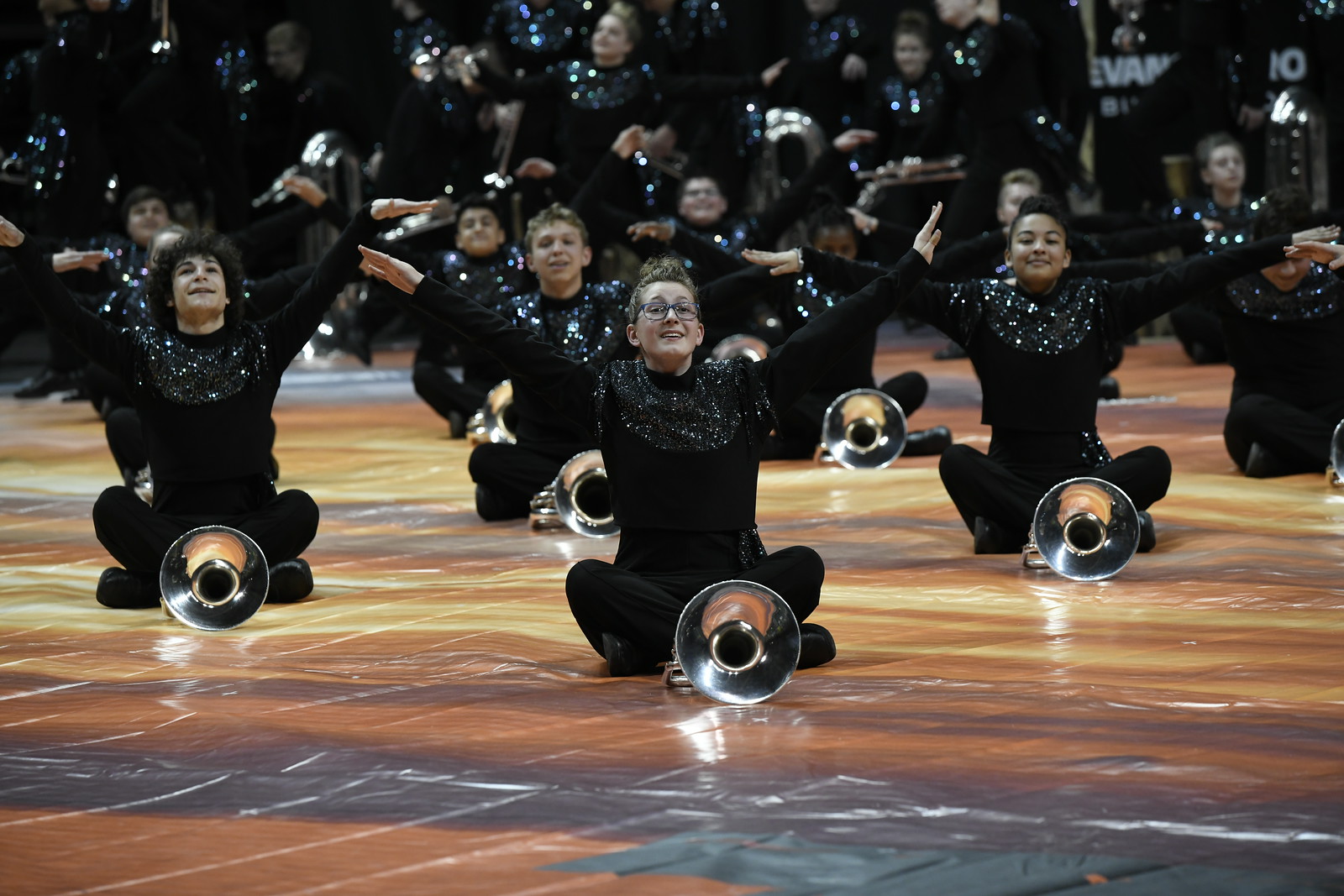 Avon’s costumes are eye catching. Mostly black, the tops and drop sash feature many sparkly sequins which reflect the arena light, a contrast to the floor, an image of a pier at sunset. At the start of the show, some of the members “fly” around the sky above the pier, while others flap their arms like wings. The opening statement, the theme to the video game Civilization VI by Christopher Tan, lends an uplifting air like the wind under the wings of the flying birds. While playing this theme full out, the tubas are hauling their freight all over the floor, an impressive display of marching technique. During the second movement, the dance work by the performers is mesmerizing to watch. Throughout the show, we could hear how well trained these performers are. At the end, with a reprise of the Civilization VI music, bird kites flew over the group, a “Murmuration” flying over the dock at the end of the day. 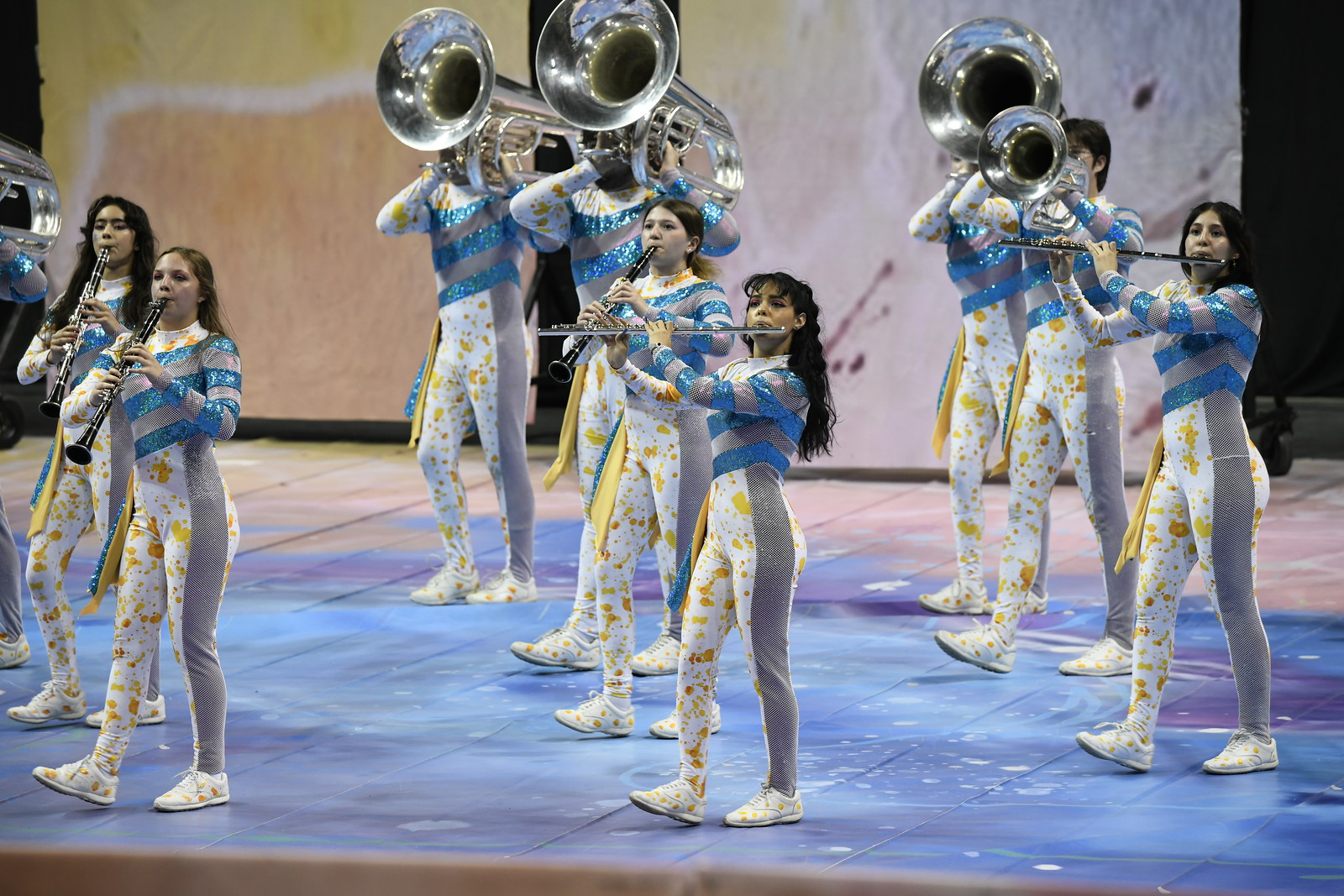 Azle took us on a trip down “Moon River”, complete with a moon shaped boat. After a brief opening track of the eponymous song, a flute soloist with brass accompaniment started us on our journey. The brass section put on a double tonguing and articulation clinic during the opener. The color palette is full of pastels of various shades and colors, almost like a river through space and imagination. At one point, balls of various sizes, looking like moons themselves, are brought out as props and danced with. A reprise of the “Moon River” theme leads into the fast paced finale of the show. 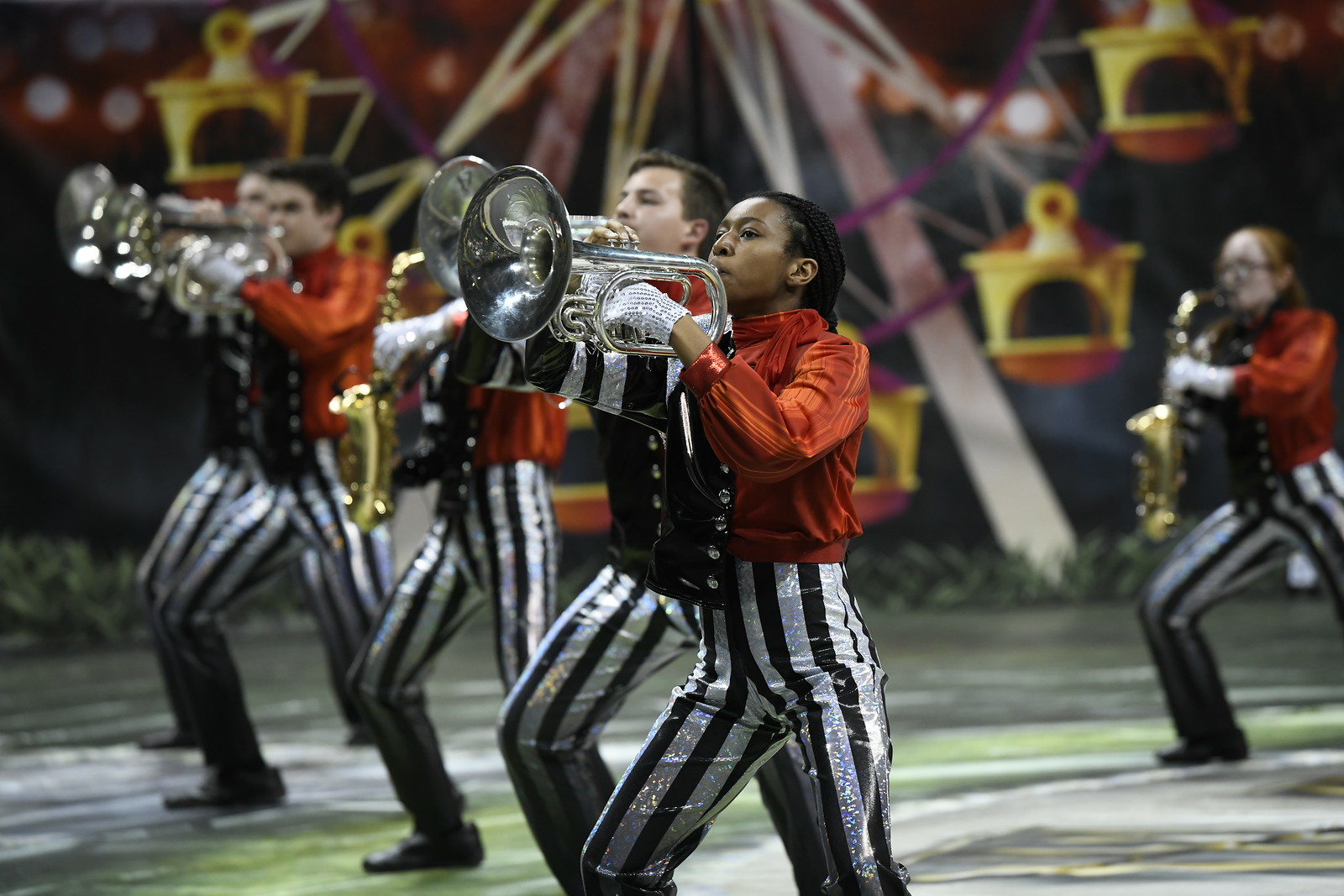 For Cleveland, the theme, “Foreverland”, refers to Michael Jackson, as exhibited by the news reports of his death underlying the opening flute soloist. The visual motif is one of an amusement park, including a Ferris wheel, a merry go round, concession stands, and carnival games. The members also wear a single glove on their left hand, covered in gems like Michael Jackson wore. A wonderful flugelhorn solo opens the second movement of the show, “Man In The Mirror”, with a full length mirror behind him that he then moonwalks behind. The movement ends with the winds forming a stylized M on the floor. After a brief brass fanfare, a saxophone soloist introduces “Earth Song”.  A reprise of the “Man In The Mirror Theme” brings us to the finish of the show, complete with a Michael Jackson stand-in in full Smooth Criminal white suit and his own moonwalk. As the group leaves the floor, he dances to “The Way You Make Me Feel” and works the crowd one last time. 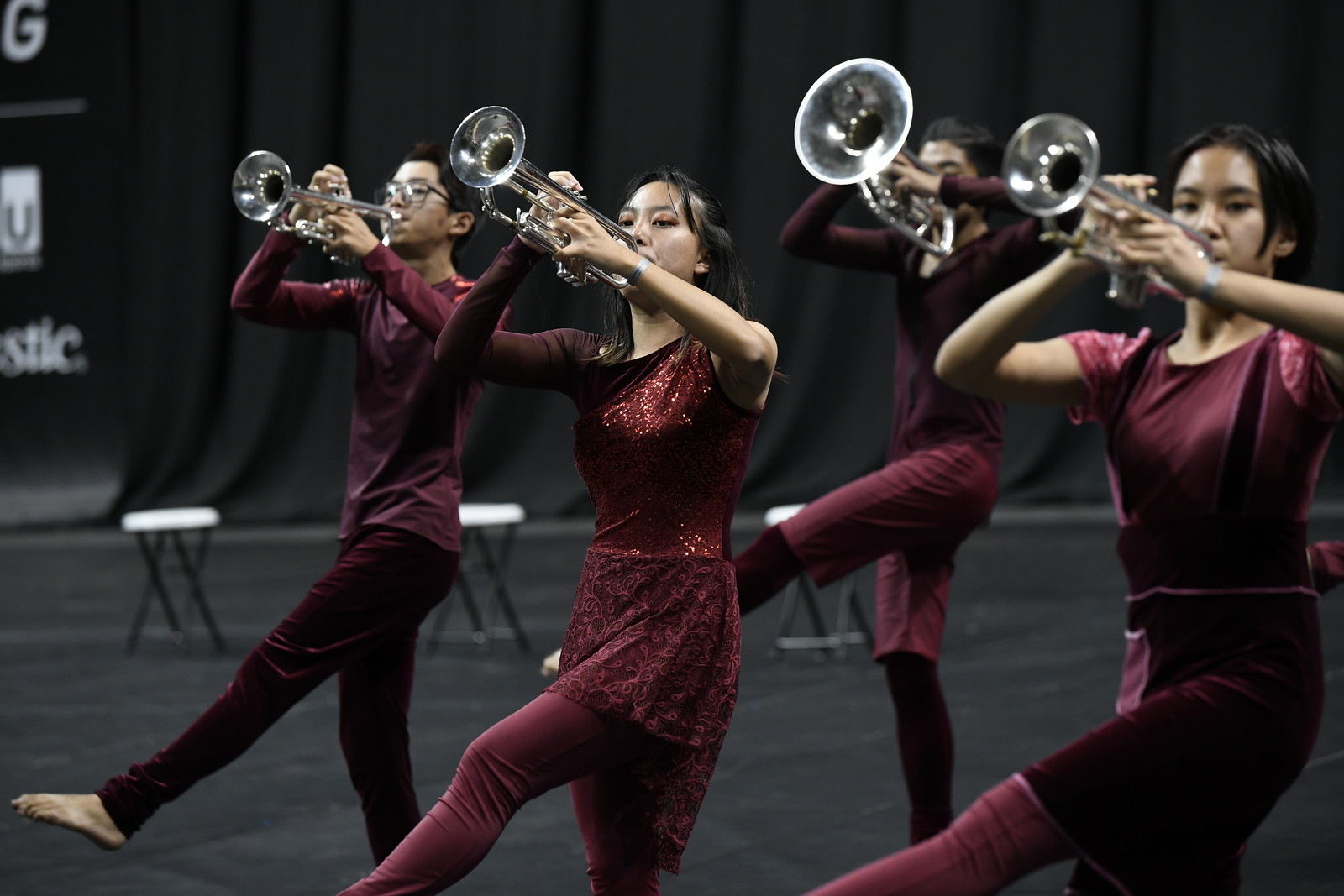 What is amazing about Mililani is how well they move, both in terms of their marching technique, as well as their dance skills. The show centers around the concept of “YOU”, with narration underlying the music about our concept of ourselves and our self worth. The music is in many ways a soundtrack to this narration, but it also stands on its own, especially with how well the members perform it. Mililani also stands out with how well they use microphone placement for their soloists and small ensembles, with two directional mics at the front of the floor to pick up these performers when staged for their moments. The rendition of Coldplay’s “Fix You” is very uplifting. At the end of the show, the group, who uses small folding stools throughout the performance, set them in the shape of the word “YOU”, emphasizing one last time the theme.

Do you ever notice that you always manage to look at the clock right when it hits 11:11? Stoneman Douglas apparently does, since that’s their show theme. A flute duet opens the show while we follow a solo dancer in red around the floor. When the full winds section comes in, they come in with authority. After an intro section, the group moves into Shostakovich’s String Quartet No. 8, and you can never go wrong with Shostakovich in a show. The music is very intricate, but the winds have no problem with it. The next movement is introduced with the  haunting theme from Edward Scissorhands, made more so as the group plays it facing to the back of the arena to start. When they turn forward, Saint-Saens’ Danse Macabre is up to bat. As the show finishes, the horns form an 11 on the floor as a grandfather clock with a flashing red face pushes forward. 11:11 has come. 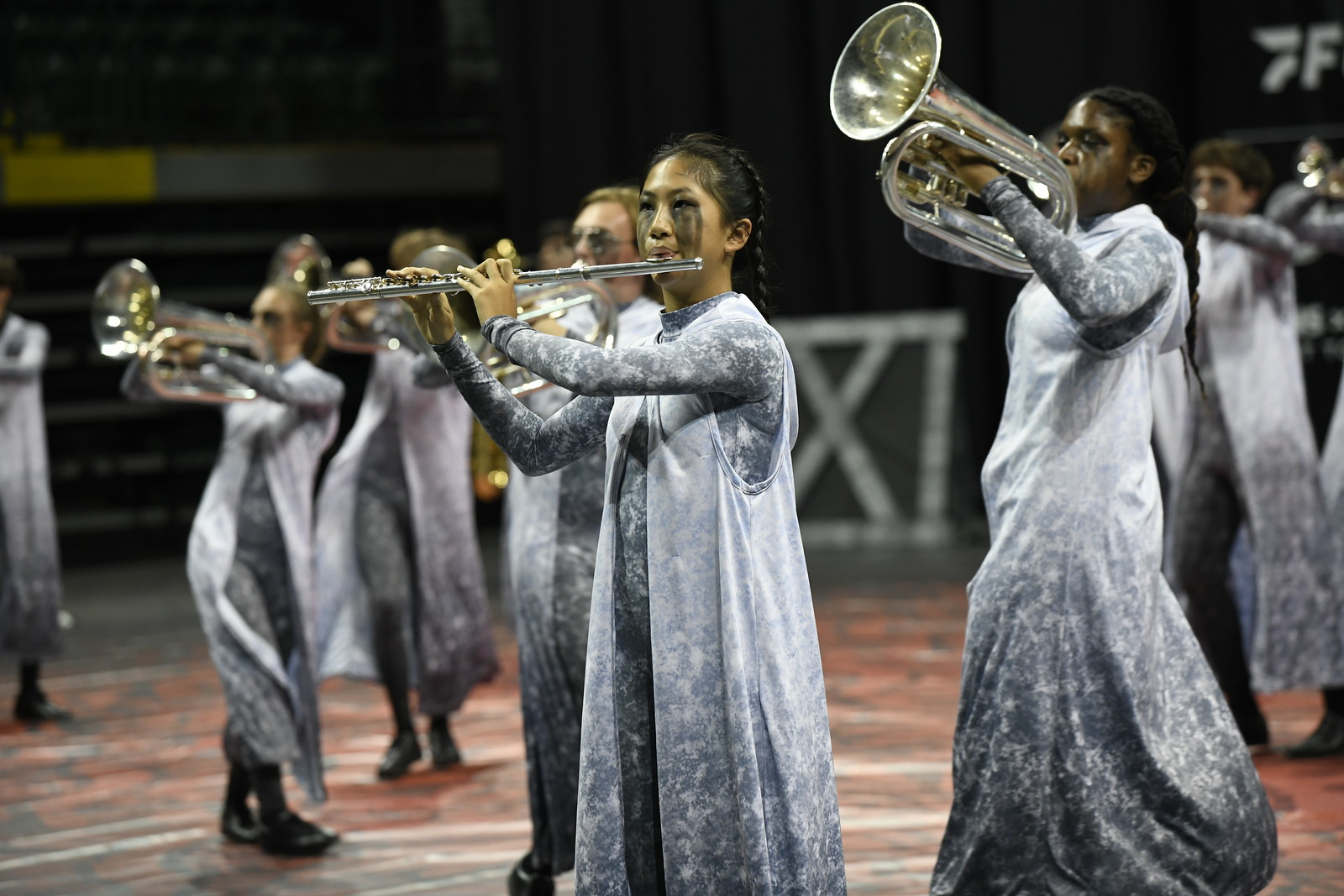 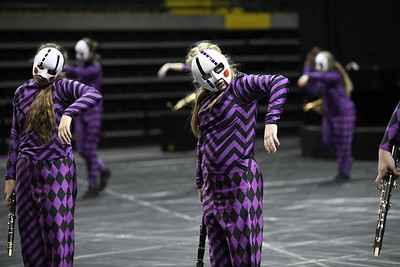 Greenfield Central was literally tied up with the start of their show as they all began connected to various marionette strings. As they broke free, they also broke into a very difficult selection of Bartok’s Music For Strings, Percussion, And Celesta. The fact that the winds could handle the tight harmonics of Bartok’s music is a testament to their skills as musicians. String instruments featured prominently in the next movement, which had a string quartet performing the piece in the back of the arena along with the winds, building to the epic climax of the piece. As the final chord of the Adagio played, the stage in the back rotated to feature two piano players (another stringed instrument, of course). As the pianists built to a frenzy, the winds tore away their strings and removed their masks, freed. They now truly had “The World On A String”. 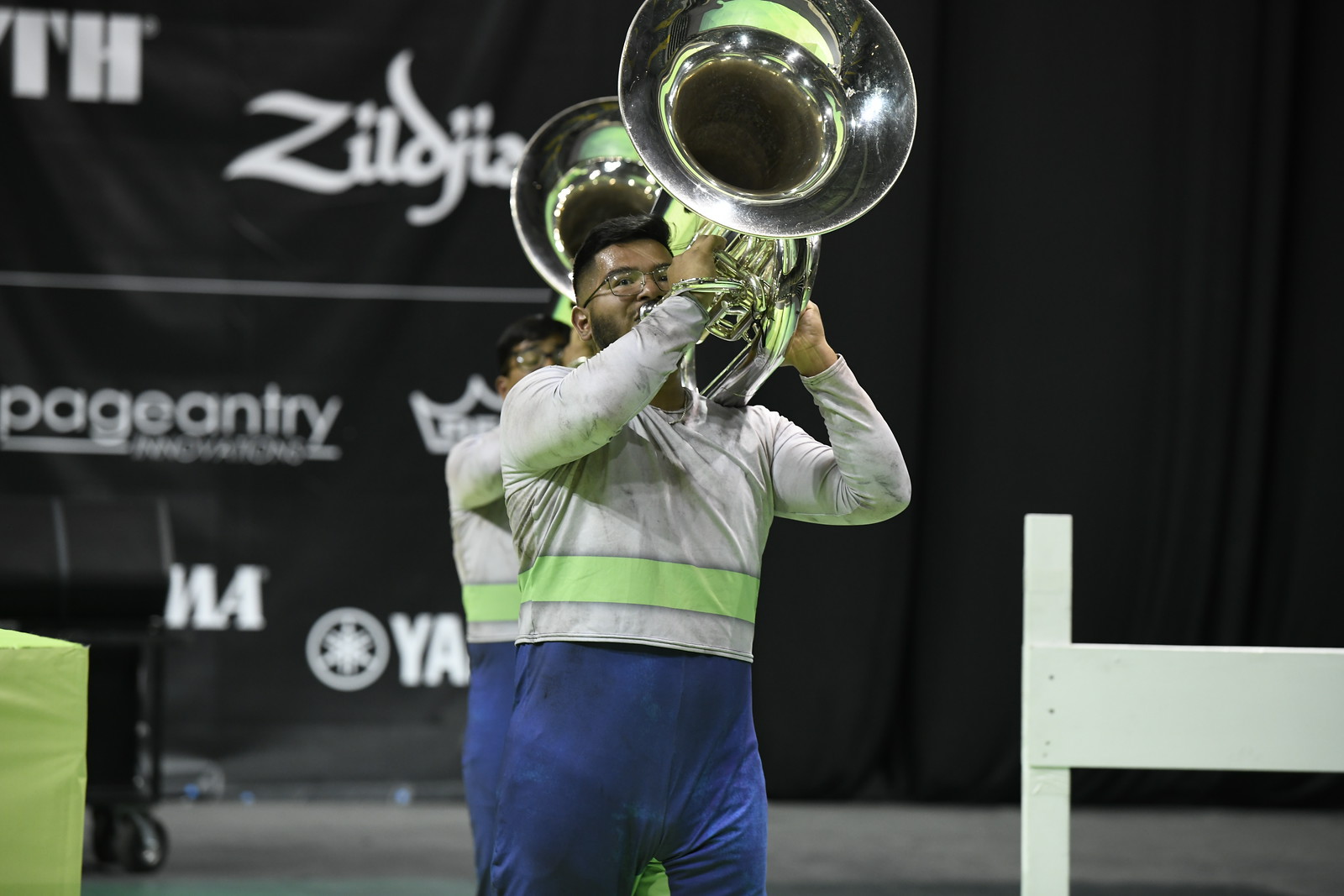 A French horn soloist on the melody of John Lennon’s “Imagine” opens UTRGV’s performance of “Greener Pastures”, showing impressive control while playing in the upper register of the instrument. The woodwinds then go completely bonkers with how many notes they can fit into a short time span. The mood changes with a bassoon soloist on some Astor Piazzolla. Their expressiveness and dexterity on their instrument was haunting and mesmerizing to listen to. Of course, you can’t do a show based on the color green without performing “Green” by Michael Torke, which then morphs into America as the winds hit a company front. 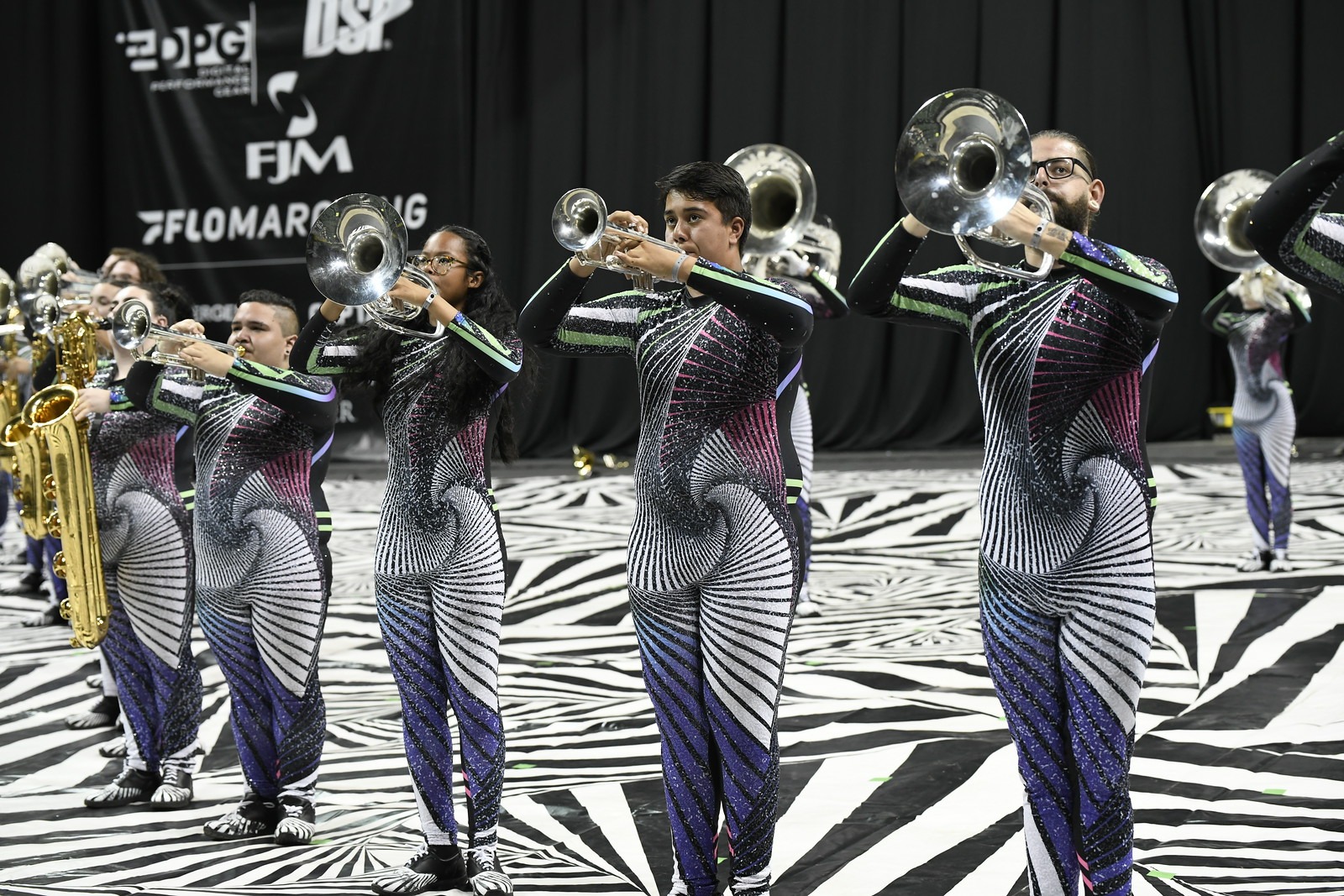 When you first see STRYKE’s costumes and floor, you wonder how they’re going to present their theme of “Hiding In Plain Sight”. Once they step on the floor, however, you realize that they do seem to blend into the pattern of the tarp, and it’s hypnotizing. Then they start playing with an incredible sound and you don’t want them to hide at all. After a phrenic opening movement, Imogen Heap’s “Hide And Seek”, which is very appropriate, gives the winds a chance to show their softer side, though they still put out a full wall of sound when the music calls for it. The group transitions into Gershwin’s “Rhapsody In Blue”, with a stellar trombone soloist on the opening solo. The music and the drill meshes so well during the closer. The show ends with the winds hiding their face behind their hands, truly “hiding in plain sight”. 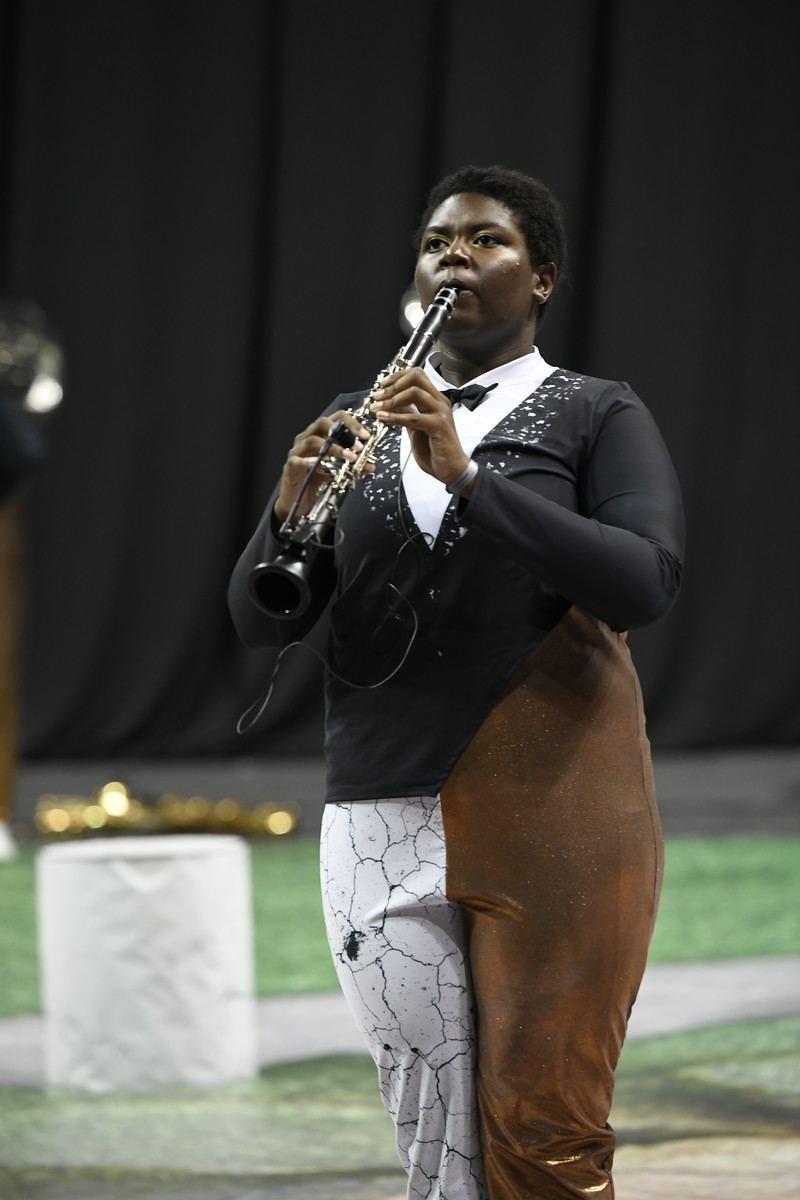 The theme of “Lincoln” is everywhere in this show. From the Lincoln Memorial in the back corner of the floor to the image of pennies, featuring Lincoln’s visage, on the front of the tarp, to the costumes the performers wear, half evoking the suit Lincoln is always pictured in, and one leg the color of those Lincoln pennies. The winds perform some intricate foot work while playing during the middle of their show. The words of Lincoln are also used throughout the show. At one point, a woodwind quintet performs in the back of the floor with a very haunting melody. With a shout of “FREEDOM!”, Horizon gets the crowd clapping with them, then gets them on their feet with some serious trombone smear. 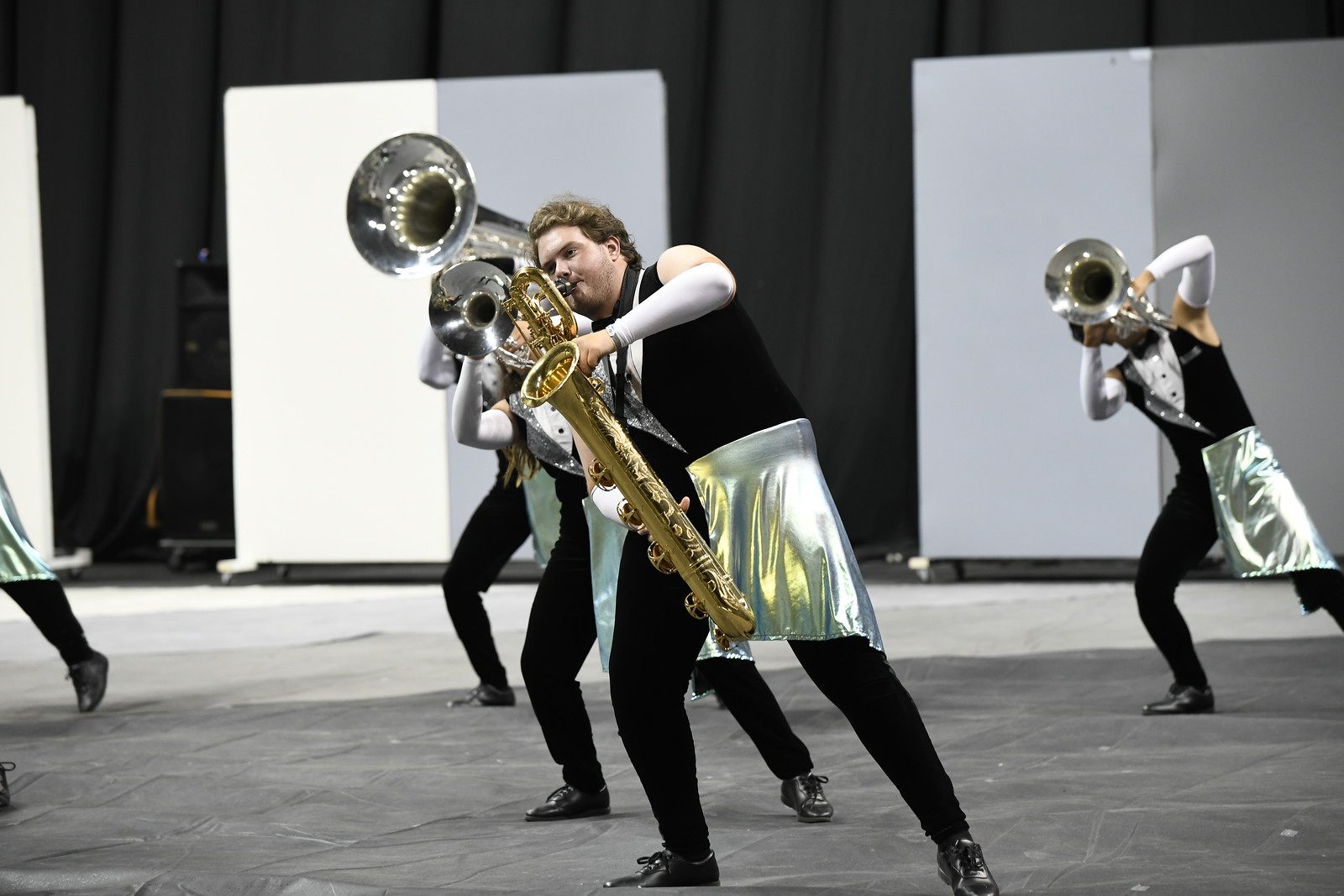 With just 10 winds players on the floor, Legacy was one of the smallest groups to perform. What they may have lacked in numbers, however, they definitely had in sound and skill, and this show, also named “Legacy”, was written perfectly for this group. Two other performers on the floor, a pianist and a solo dancer, depicted the story of the show. About halfway through, the winds brought out a set of poles on the floor, which they then danced with in between playing. The solo dancer, dressed in white, added translucent iridescent wings during the closer, a unique take on the classic Sinatra tune, “My Way”.