Congratulations to all of our 2022 Scholastic A class finalists! View a recap of their productions below in order of Finals placement. 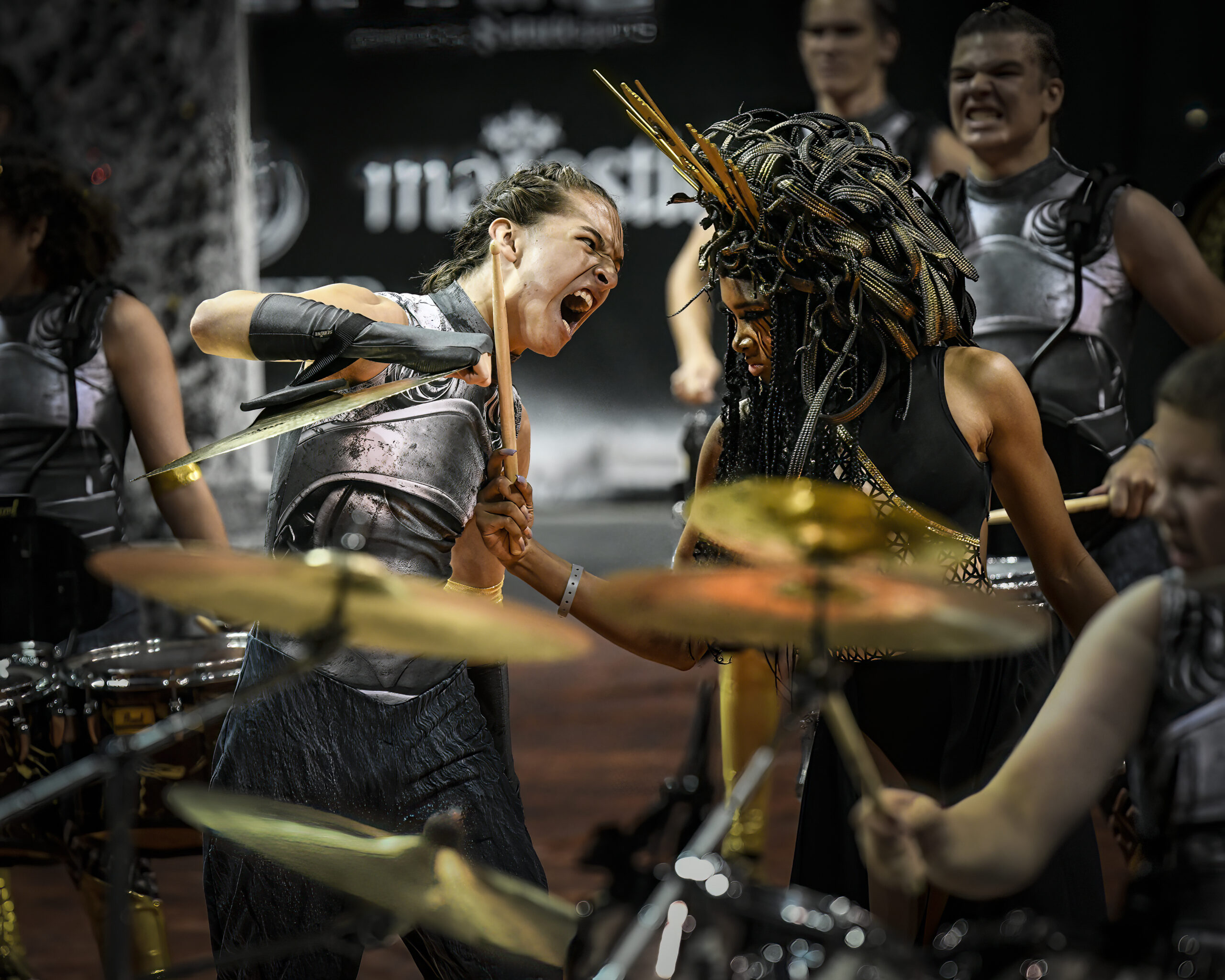 Clover HS nearly turned the audience to stone with their performance of “Medusa,” set in Ancient Greece. Medusa began as a beautiful maiden, and the entire ensemble was enchanted by her. All of a sudden, Medusa was cursed into her more commonly known state, shifting the mood of the show completely. Performers shielded their eyes to avoid being turned to stone, including a section of completely blind drumming from the battery. The music became much more intense and dramatic to further showcase the drastic contrast, building to the climax where Medusa’s head was cut off, ending Clover’s Greek myth with a bang. 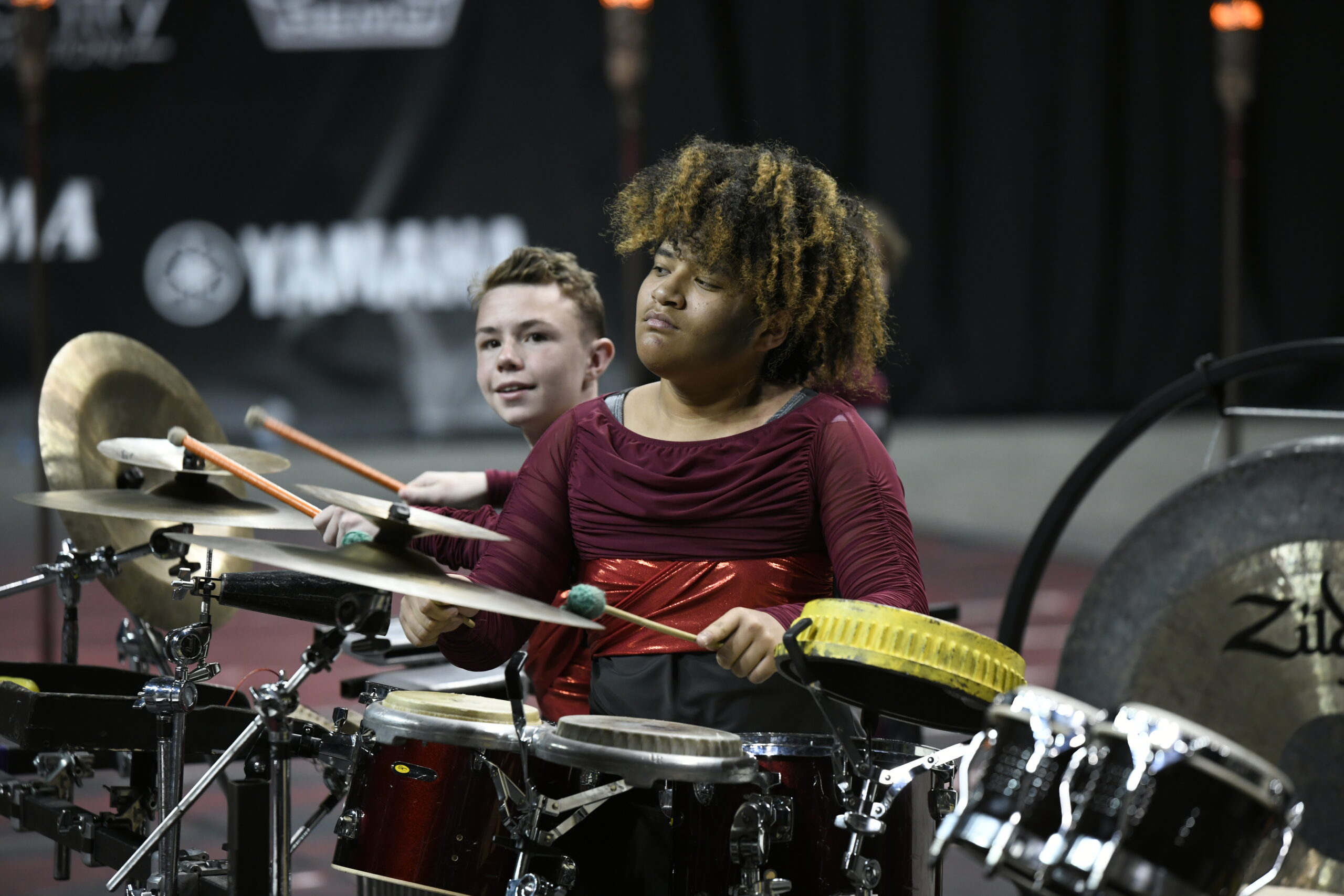 Old Bridge HS lit UD Arena on fire in their program, “Pass the Torch.” The bass line was the star of the show with their intricate musical phrases. The entire ensemble performed very cohesively, interacting with one another and passing the flame around during various moments of the performance. A wholesome and happy ballad served as the soundtrack to a good life lesson: “pass your flame to those who follow your light.” The torch eventually made it to the center of the floor where teamwork allowed the flame to come to life. 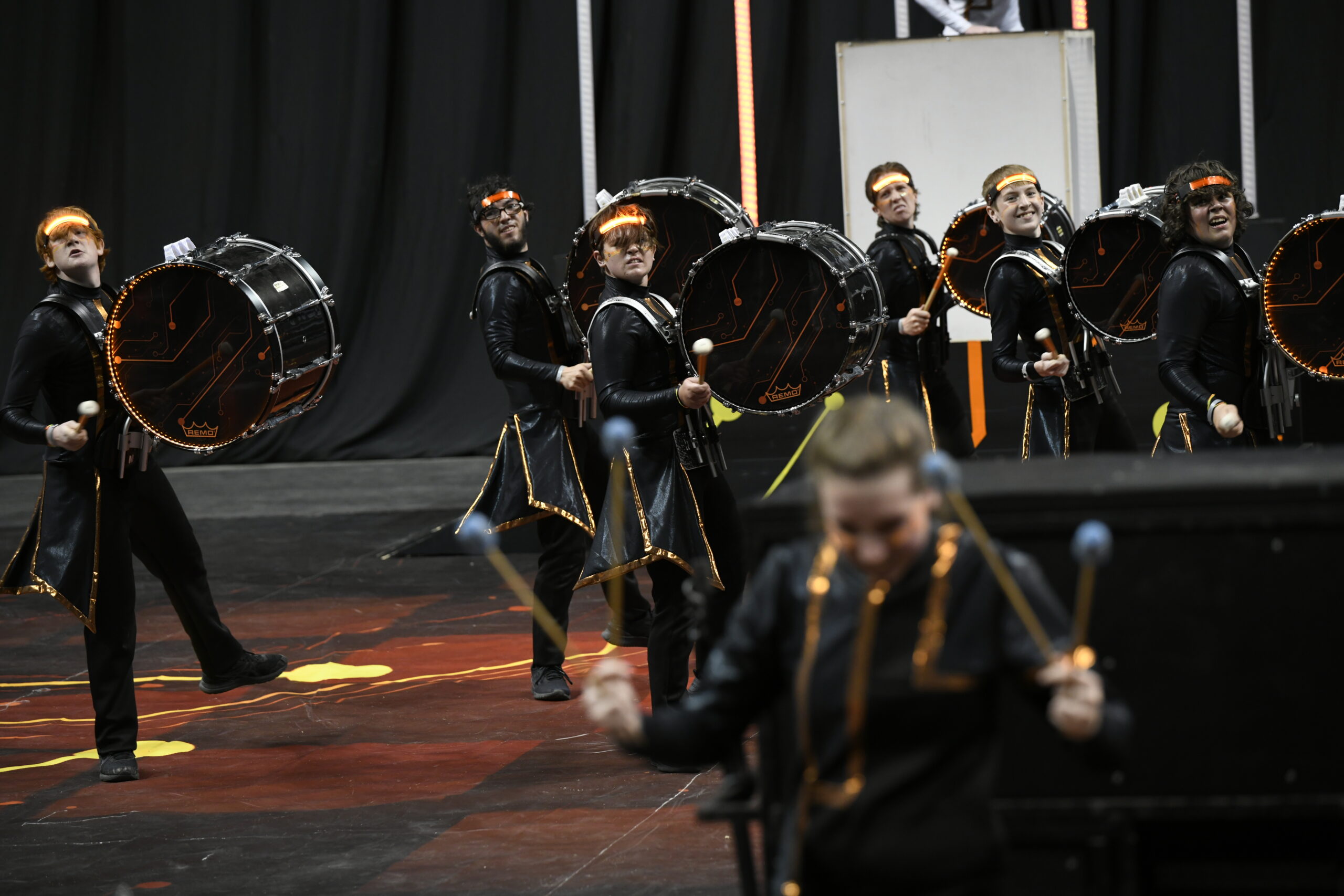 Ninety Six HS had the power in UD Arena during Scholastic A finals. Their program “Power” incorporated copper uniforms, timed lights on the different instruments, and multiple dance breaks that showed off the players’ ability to move. The tension built with the help of “Everybody Wants to Rule the World” by Tears for Fears as the ensemble explored different types of power, such as electricity and control. Snap’s “The Power” was also featured strongly as control shifted throughout the performance. The power was up for grabs by the end of the show, leaving the audience asking “who has the power?” 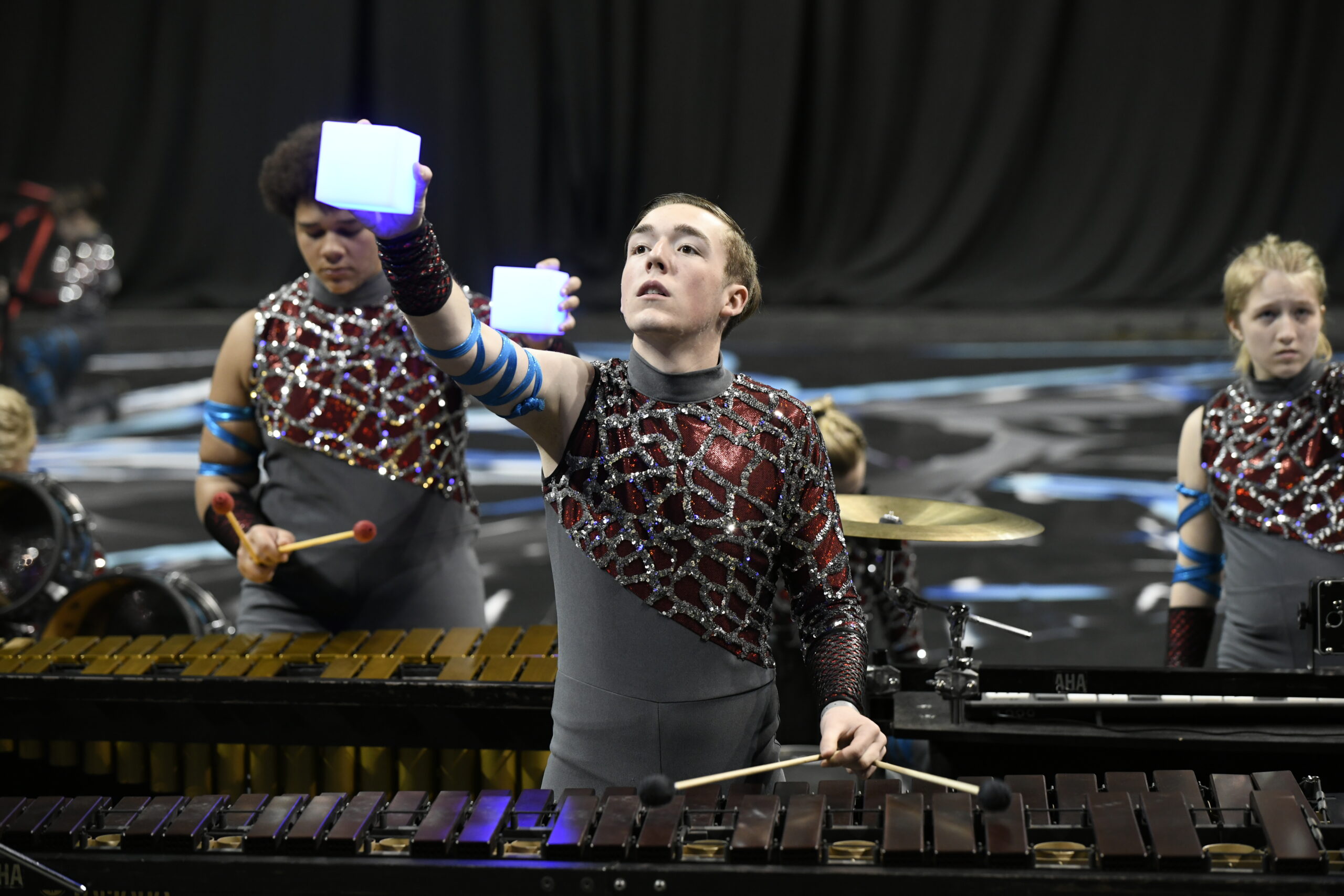 “Heart-Shaped Box” by Franklin Community HS taught the audience to never give up on their dreams through a heartwarming back and forth experience. Opening with a heart-shaped prop, the pit helped develop the story as a piece of the heart was removed, creating uneasiness within the ensemble. The moral dilemma was further shown in the somber feeling explored by the pit as the entire heart came apart. A mood shift took place once more as “Listen to Your Heart” by Roxette taught the performers to hold onto their dreams, with a beautiful resolve at the end of the performance as the heart was formed once more.

With a heavy heart, I inform you of the war that took place in Unionville HS’s “The Typist.” The performance opened with typewriters, informing the public of the strife taking place in the world. The show delved into different moods, utilizing the battery to demonstrate chaos and fear, and the pit to evoke emotion in the audience as the story began to sadden. Letters home were written to families of soldiers who passed in the line of duty and families were torn apart throughout a detailed and emotional jump back into history. 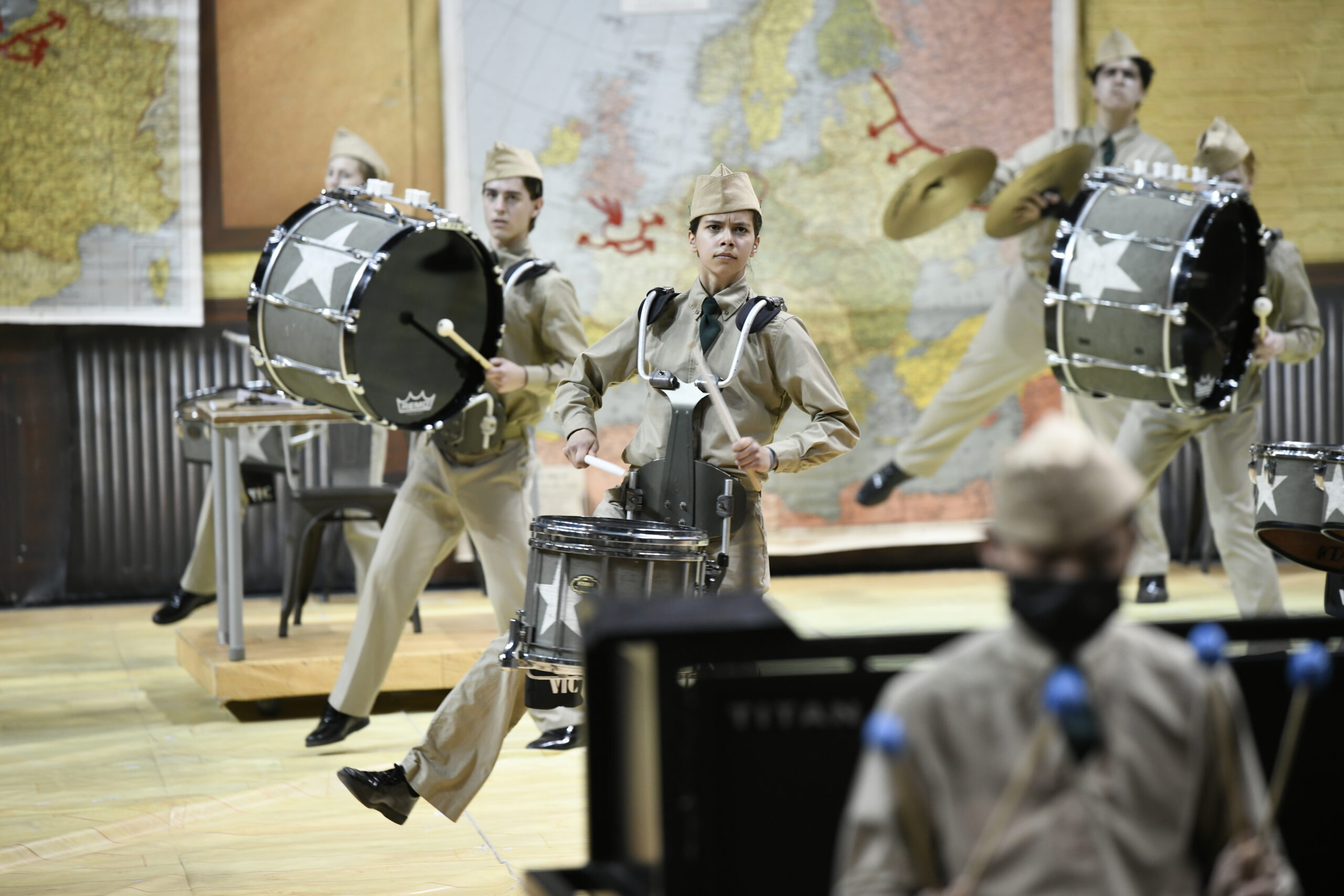 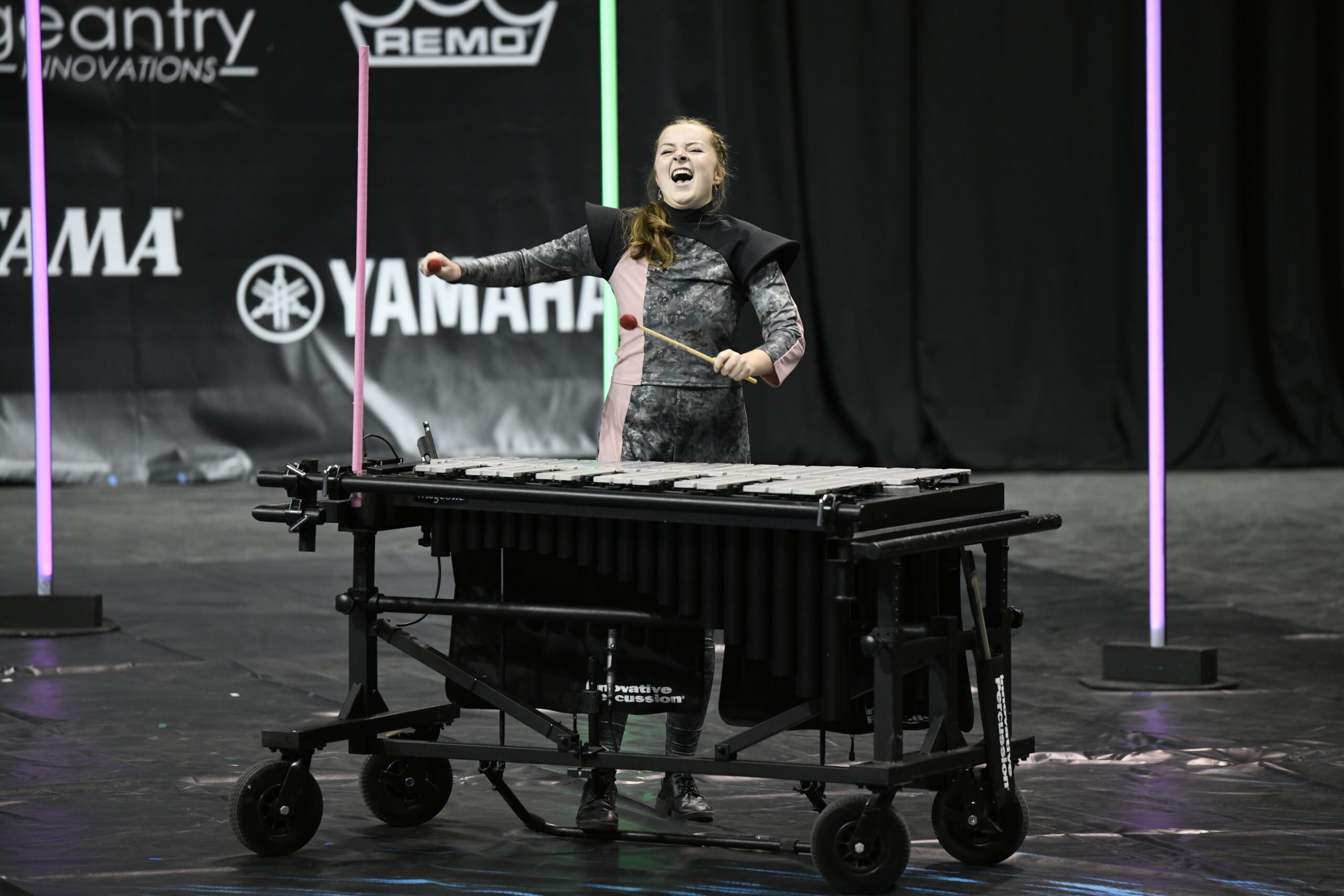 No one has better vibes than North Allegheny HS. “Good Vibes” explored different types of “vibes” throughout their show, performing both physical and musical vibrations as the vibraphones became the stars of the show. Featuring “Good Vibrations” by Loleatta Holloway and Marky Mark and the Funky Bunch, the performers used tubes and hand motions to replicate the vibrations, showcasing friendship and togetherness as members of the pit began to play using the same instruments. From the numerous impressive quad solos to the whimsy, North Allegheny HS really brought the best vibes to UD Arena. 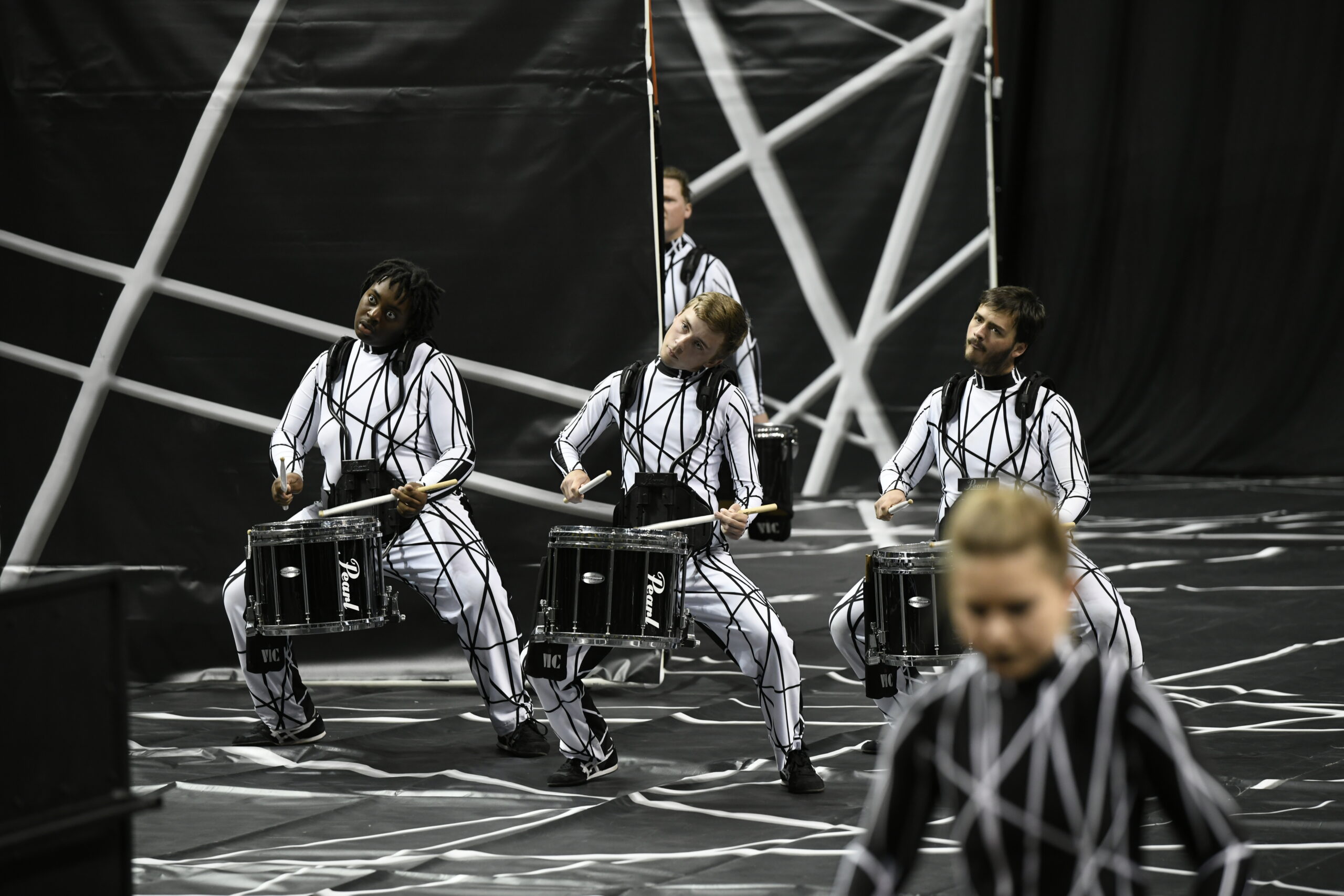 In a six minute long game of hide and seek, Pearl HS snuck around the tarp, keeping the audience on their toes as they wondered where performers would come from next. A minimal number of performers were on the floor at once, allowing for good feature moments from each section of the battery. From time to time, even the sound took a step back as performers mimicked playing in silence. The pit was shown off during a softer, angelic movement that severely contrasted the intensity from earlier in the show. As if nothing had ever happened, the show ended just as it began, with no one left on the tarp. 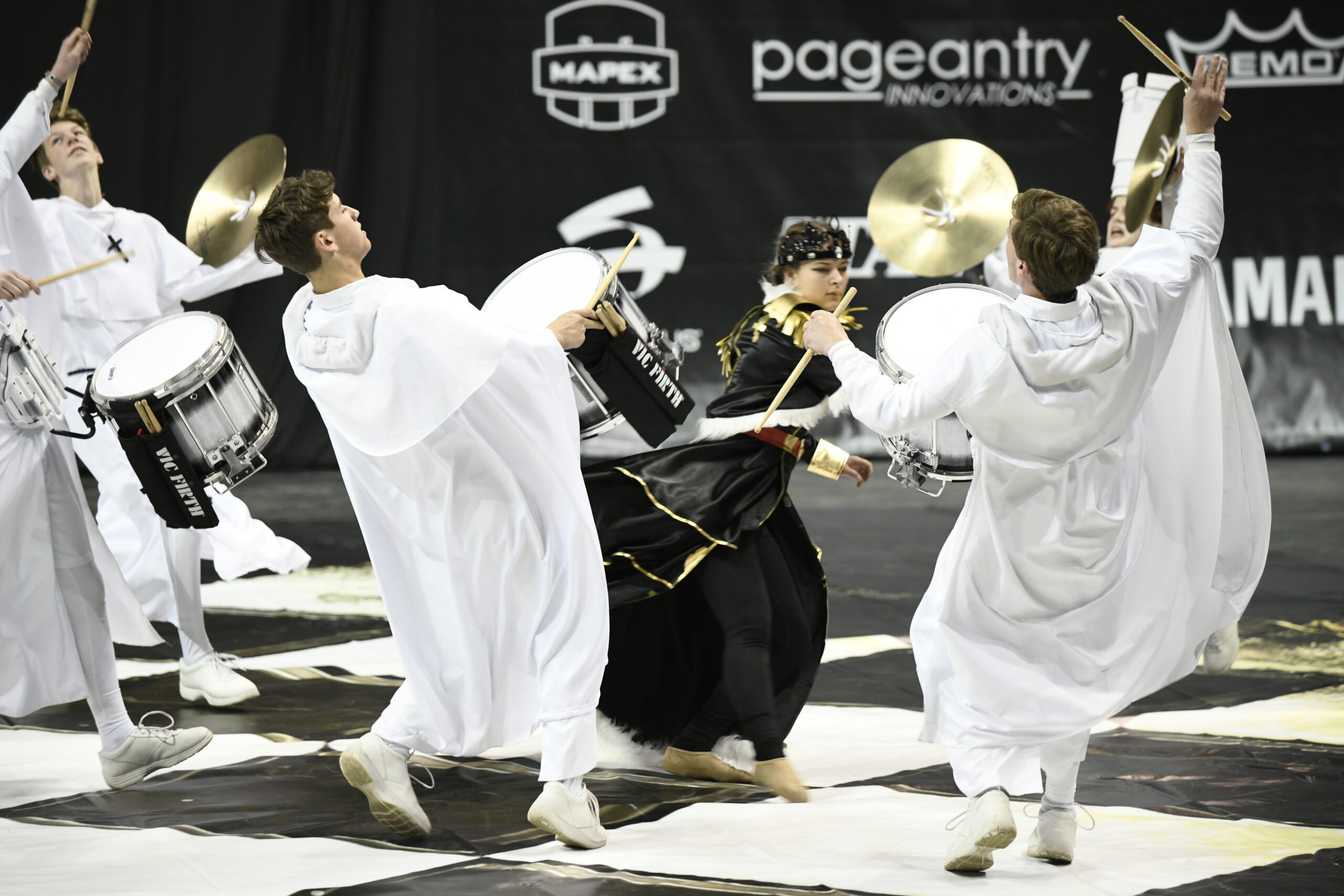 The intricate game of chess was brought to life with Hempfield HS in “Checkmate.” With a chess board for a tarp, the white and black pieces fought for a spot as the winner of the game, producing drama and intensity as the audience anxiously waited to see who the final victor would be. The kings from each side paced back and forth, backed by the sounds of the battery to build a scene good enough for a movie. Performers showed off their acting abilities with a powerful fight scene between kings of the opposing teams, when finally the white team comes out on top. 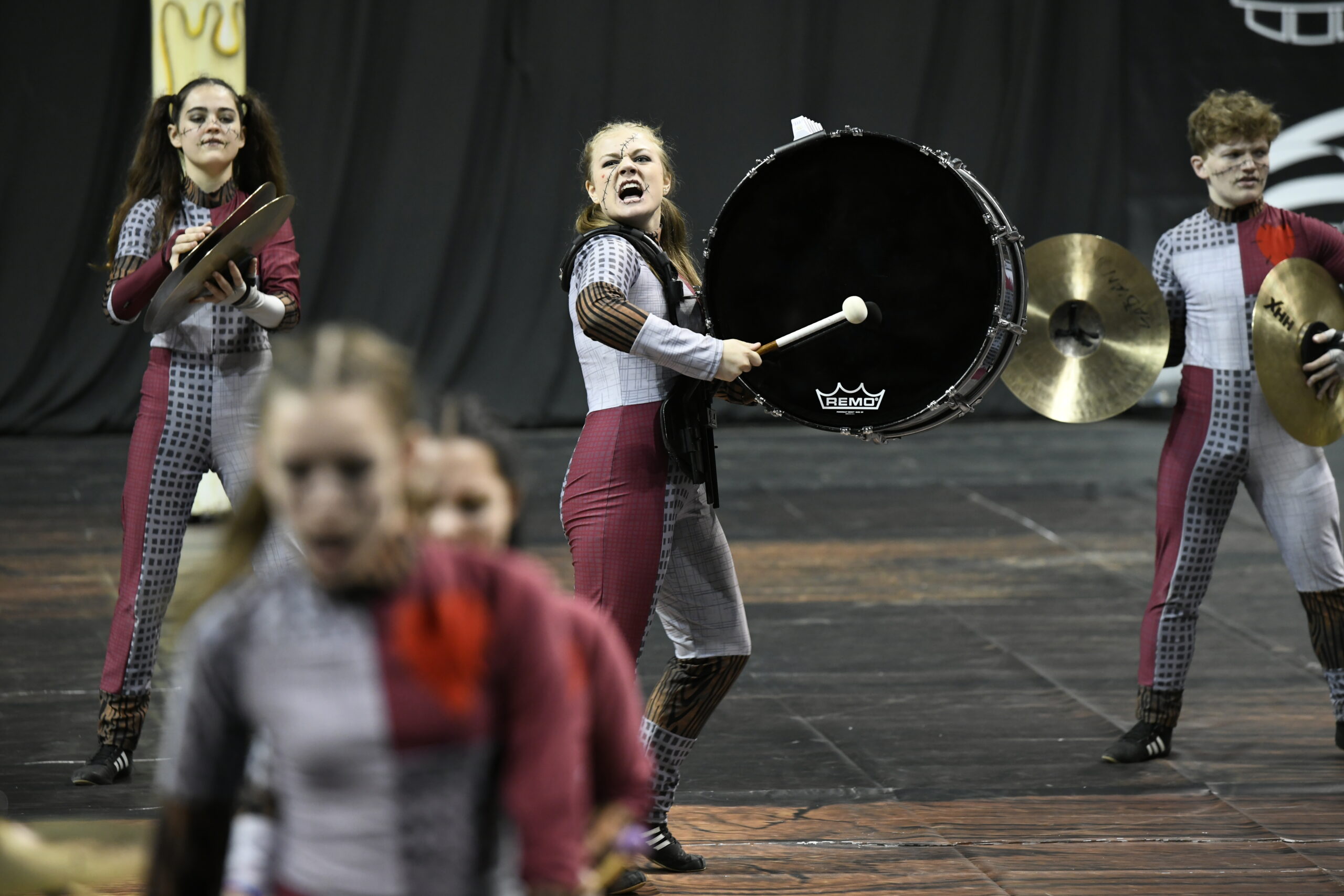 Northview HS put a spell on the audience in “Hexed.” Large candles and voodoo dolls made up the theme of the performance, as a dancer performed acrobatics down the tarp. A spinning prop was utilized to showcase a snare duet and a bass drum feature. The main dancer casted a spell on the performers, controlling them and making them dance like dolls in one section of the show. The pit formed an eerie ambiance to the performance, concluding when two performers played tug of war with the voodoo doll, causing the ensemble to “shut down.” 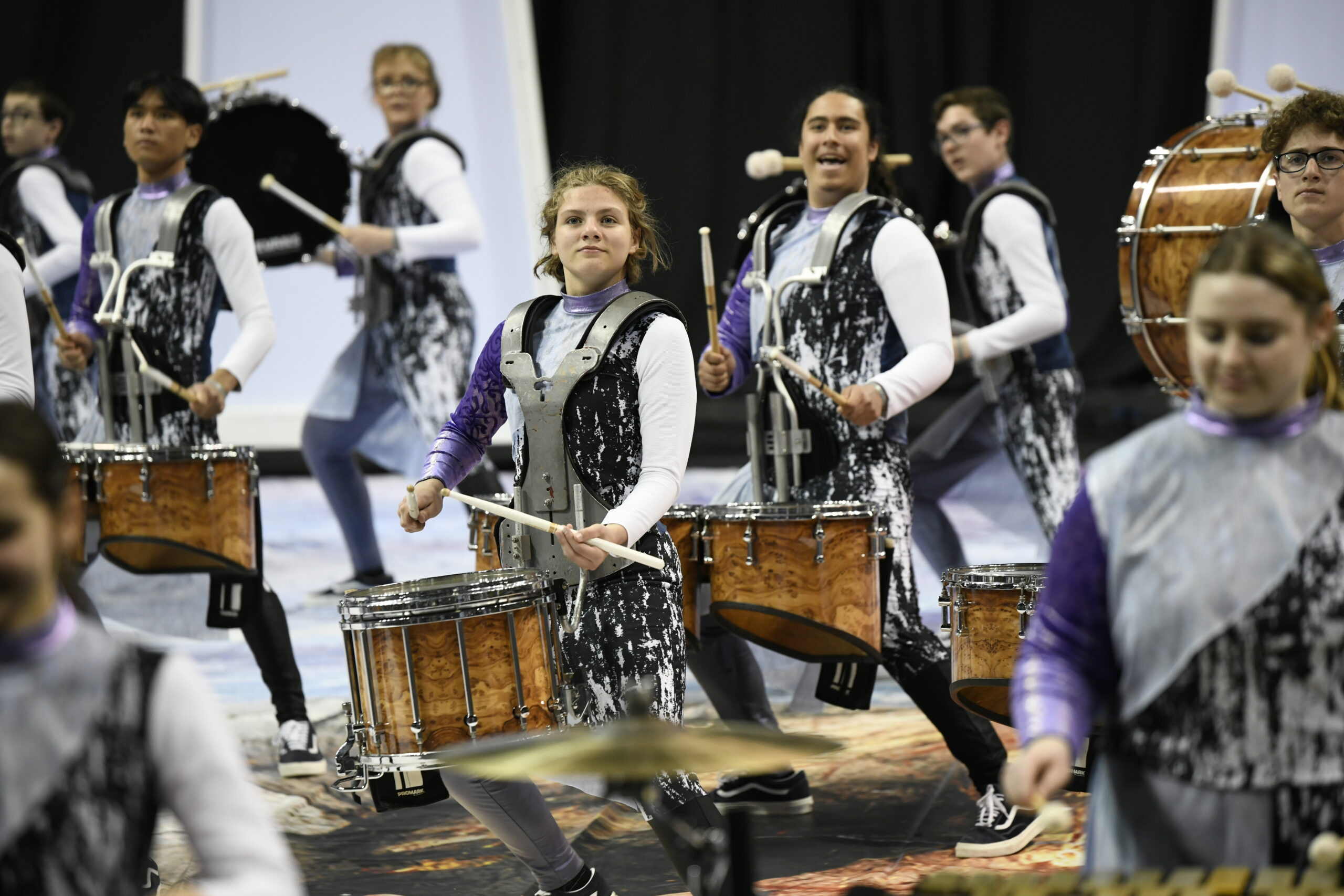 Irondale Combined Schools taught the audience about the important of life’s moments in their production “All that Remains.” Utilizing “Memories” by Maroon 5 as a guide, a wholesome, happy story was told as the ensemble worked together. The battery showcased strength through their many section features, while the pit highlighted the delicate moments that memories create. Props with flowers, houses, and swings brought the theme together and evoked emotion within the ensemble and audience. The walk down memory lane ended with a strong performance of “Don’t You Remember by Adele, teaching the lifelong lesson of appreciating the little things in life through an impactful story.

“Welcome to the Vandebilt Hotel” brought the audience of UD Arena into the world of bellhops, room service, and suitcases. Vandebilt Catholic HS had it all, from opening and closing elevator doors and a hotel romance featuring Whitney Houston’s “I Will Always Love You,” to an electronic dance break to “Hotel Room Service” by Pitbull. The attention to detail made the audience feel as though they were checking into a room themselves. A fierce battery and whimsical pit built and transitioned all throughout the performance, ending with the “ding” of the front desk bell and a happy goodbye from the hotel staff. 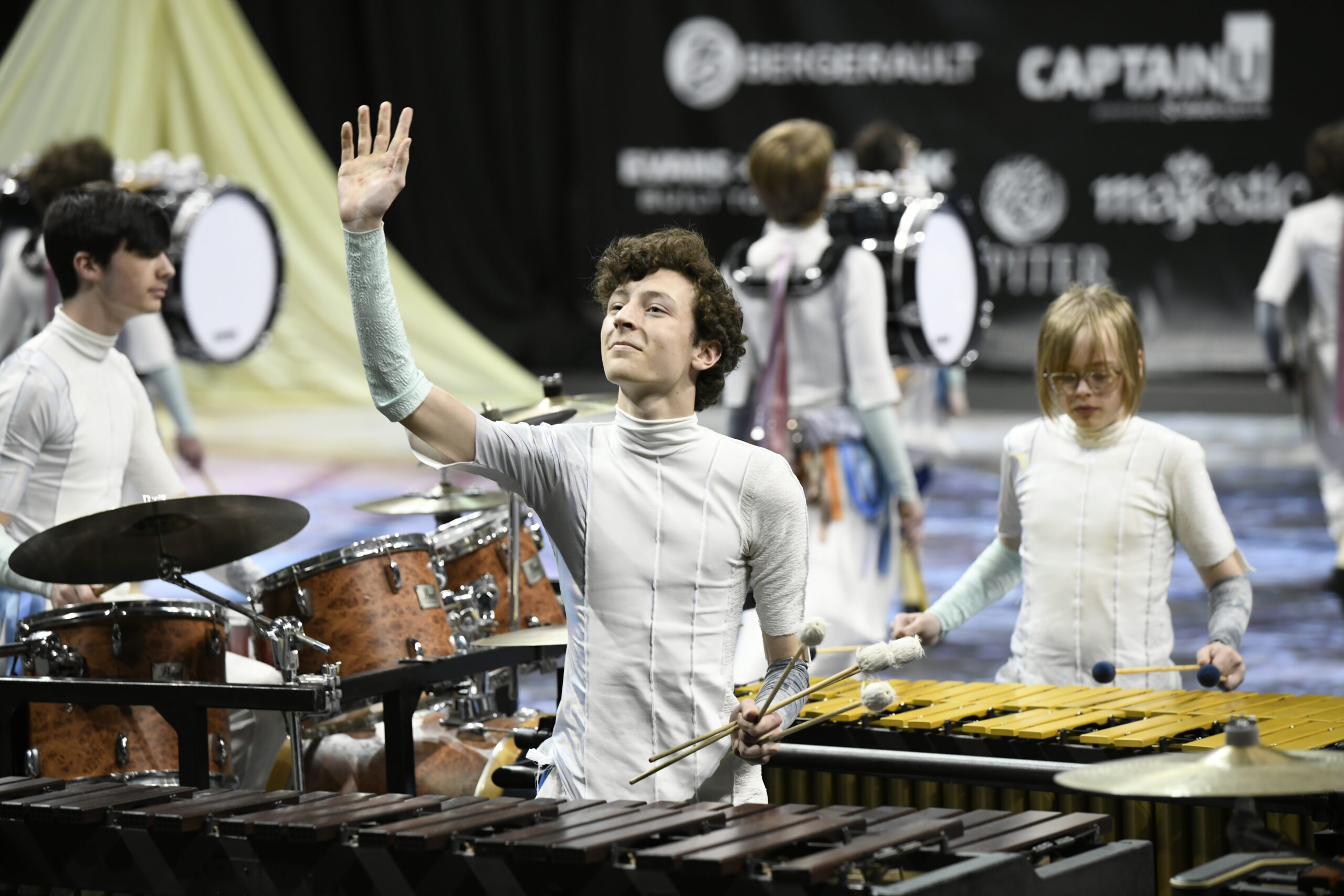 “Our Corner of the Universe” proved that you are never out of place with a graceful and impactful presentation. Performers utilized breath control and rotated around the floor, moving between three tents of colored fabric. Members of the ensemble were pulled back, but persevered as they learned to “break free from the expectations of others.” Themes of grace and strength battled back and forth to consume the audience in a heartwarming lesson about finding your corner in the universe. 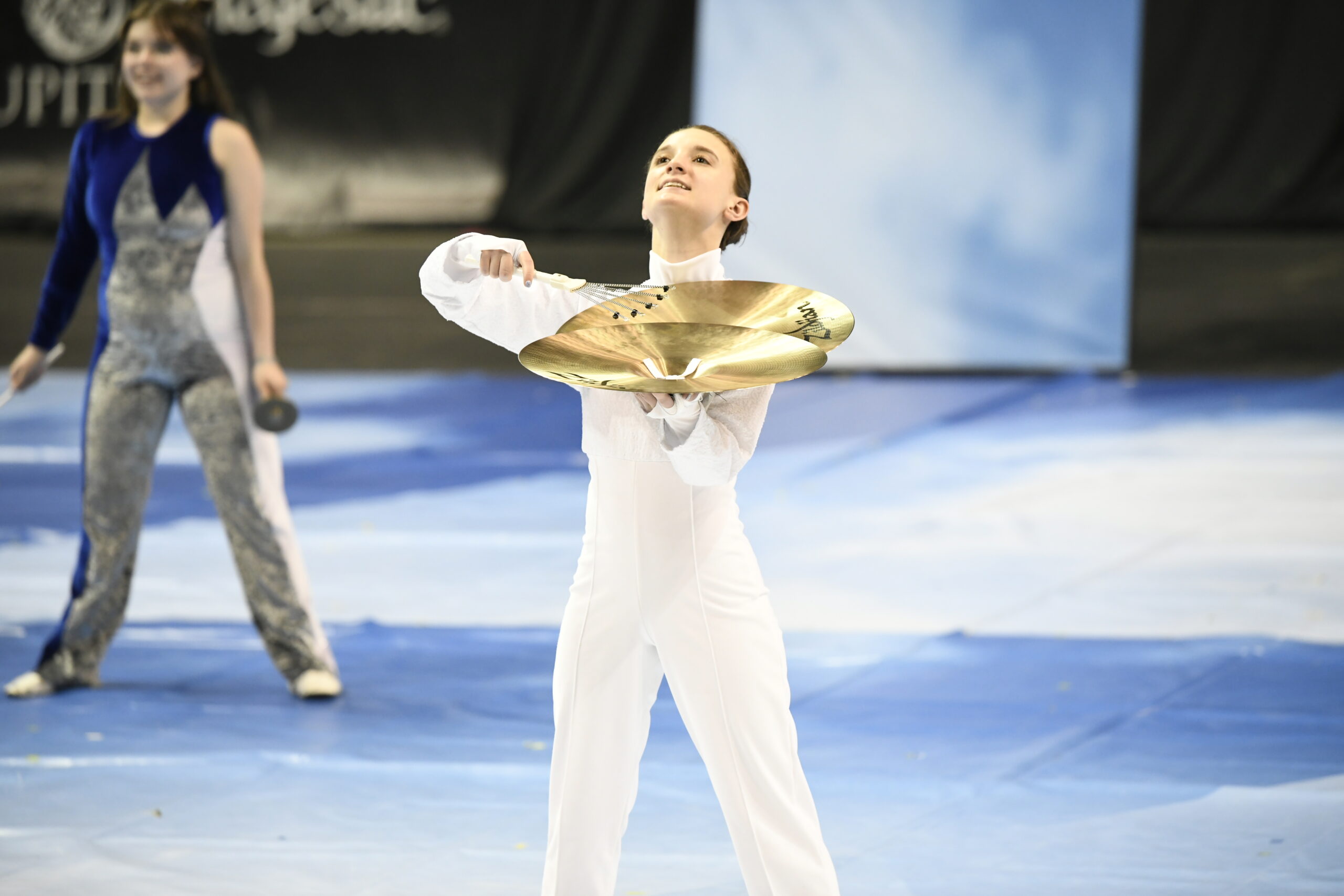 Kickapoo HS took to the skies with “Cloud 9.” All white uniforms and a tarp covered with fluffy clouds provided a backdrop for an ethereal performance. The pit played a heaven-like soundtrack for a quad soloist as the battery performed elegant choreography. Bird chirps combines with bells and chimes to transport the audience to the clouds. The battery only added to the theme, producing a clean and strong sound that didn’t take away from the softness of the rest of the ensemble, creating an all around very “sky high” show. 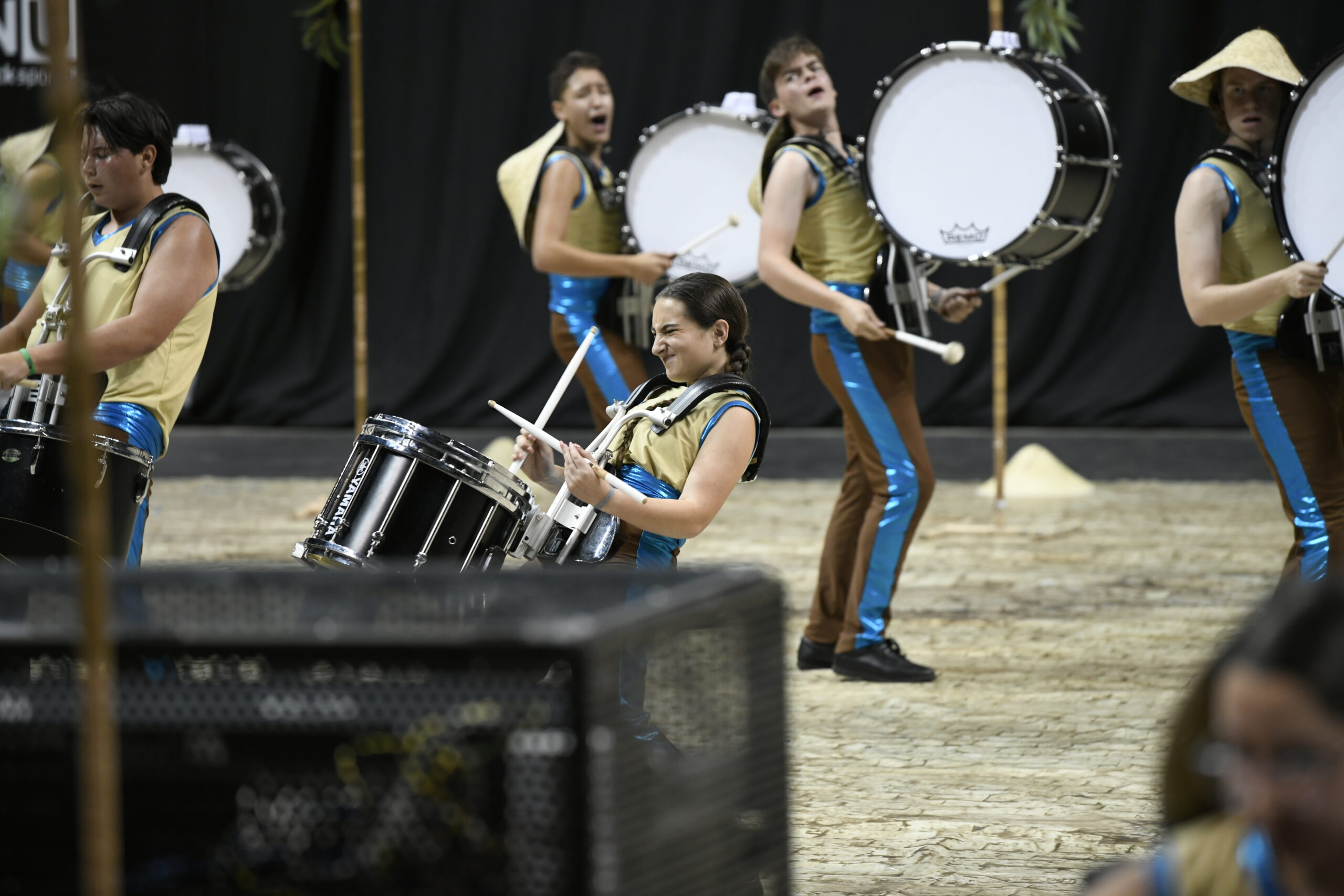 Stoneman Douglas HS taught UD Arena all about the history and culture of Shinto, a Japanese religion, during their show “A Heart of Truth - Rituals of Shinto.” Trees, straw hats, and a large archway brought the theme to life. The performance touched on the importance of calm, “the heart of truth,” as the ensemble played music with a strong Asian influence. The battery faded out and back in, shifting over to a ballad section as an audio sample discussed the art of meditation. Performers exhibited their control and helped bring the story to life during an excellent celebration of Japanese culture. 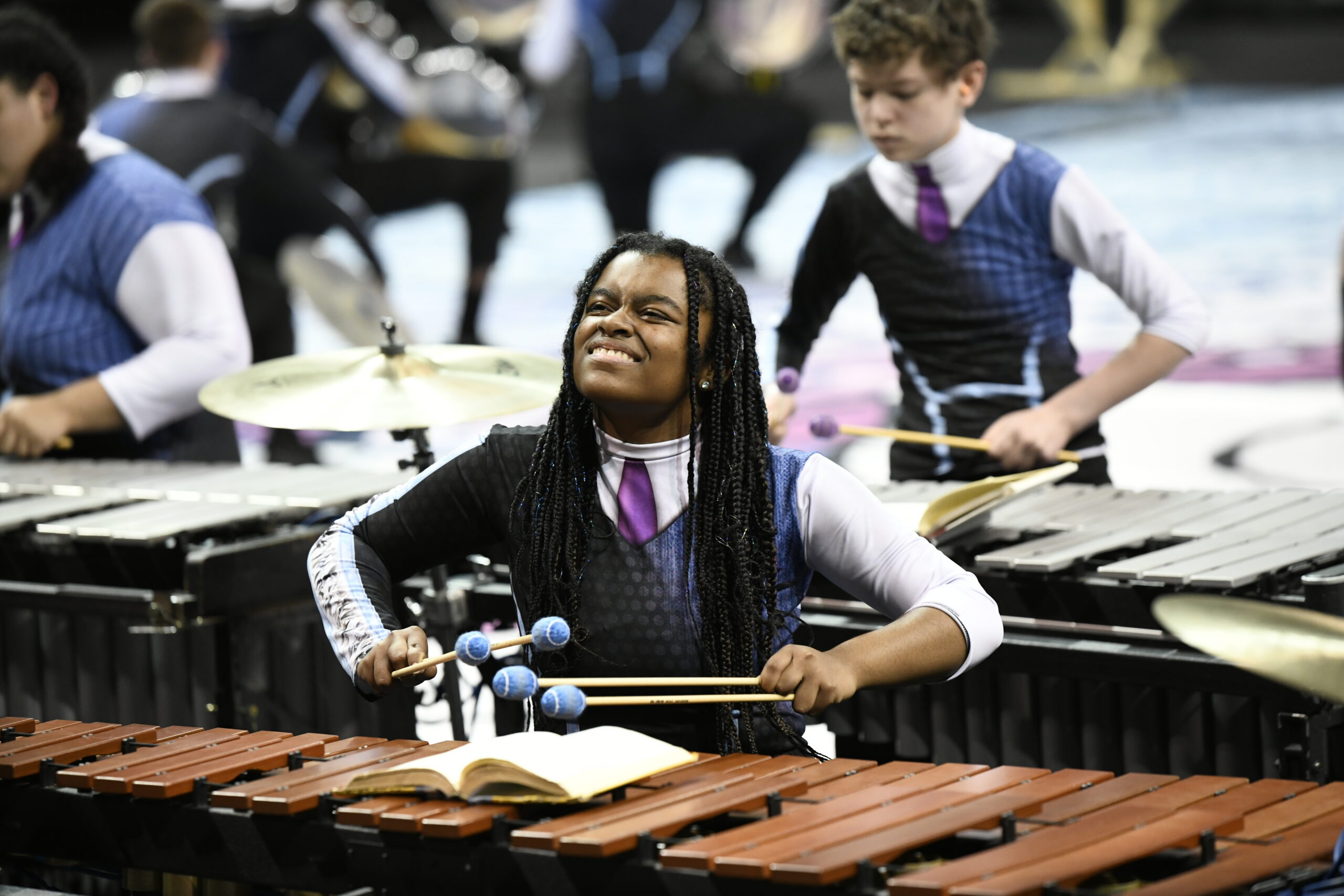 Houston, we have a problem.  Central Dauphin HS had their head up in space! “Spaced Out” took the audience through the mind of one school-kid as he daydreamed about all things space. A colorful, abstract tarp with images of rockets and planets galore had audience members convinced they had gotten on a rocket and lifted off. The pit sparkled to create a twinkly, daydreaming atmosphere as props and drums lit up with stars. All of a sudden, the bell rang, pulling Central Dauphin’s daydreamer back down to Earth. 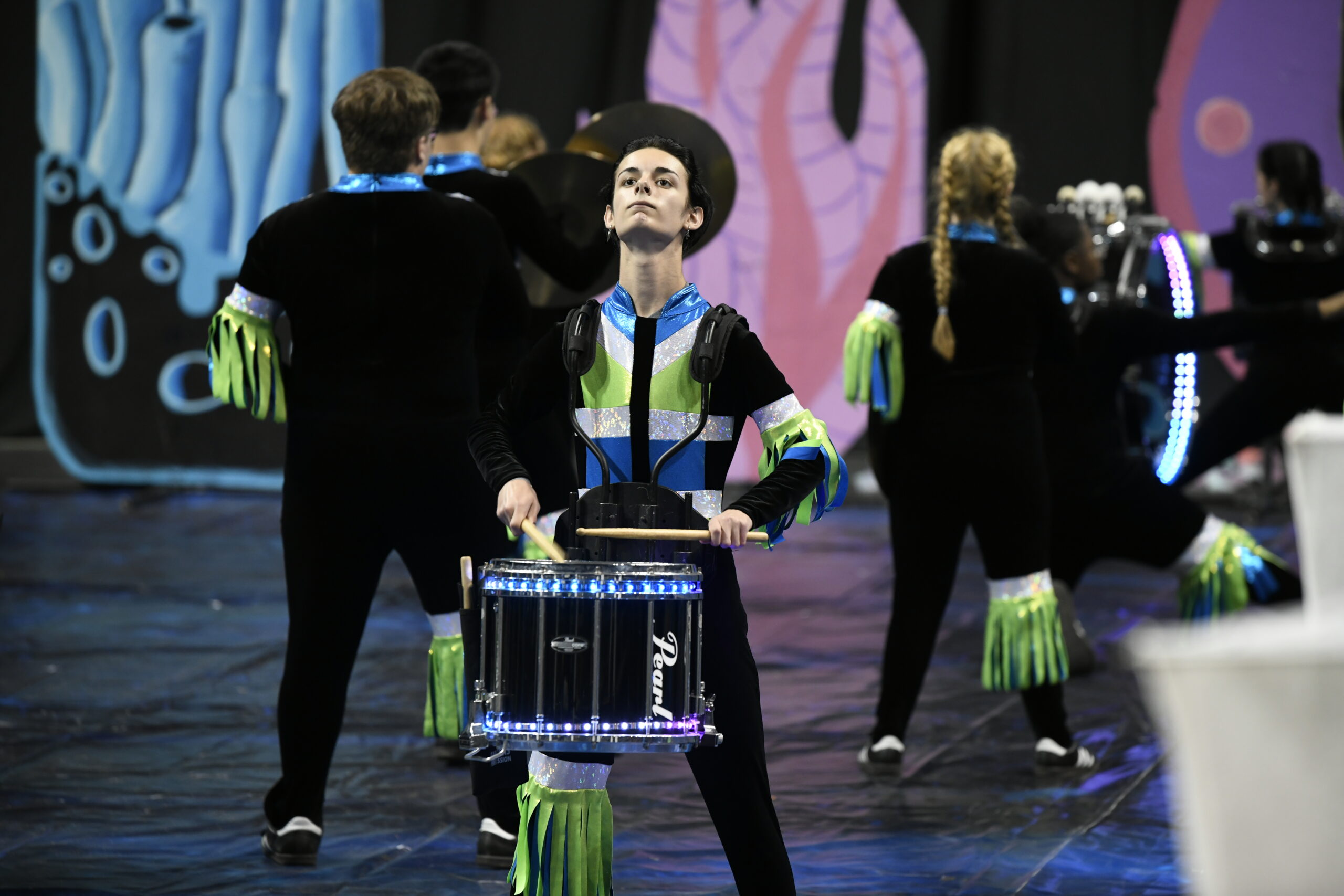 UD Arena dove deep below the waves with Gulfport HS in “Bioluminescence.” Coral reefs, kelp, and sea anemones were scattered across the floor, bringing the under-the-sea theme to life. Audience members were taken down below the surface to explore, being greeted by jellyfish waving “hello” and strong predators of the deep through the use of a technically proficient bass line. The pit provided a bubbly, peaceful feel to the performance while the large battery left a powerful impact on the underwater universe.