WGI Winds, in its fourth year of existence, increased in numbers from 20 units in 2015 to 45 units at the 2018 WGI World Championships in Dayton. Units came from 20 states spanning the breath of America, earlier performing in fourteen regional events staged across the country. There was a great degree of variety among the competing ensembles, with some telling a story and others focusing on the music to convey the theme.

Several groups utilized props and sets and had complex floor designs, while others left their visual program stripped down. Many groups also had a small guard component. Most groups had a small stationary ensemble of percussion instruments, except more often than not set at the back of the performing area to keep the front visually open. Amplification of these instruments has made it possible to place them anywhere.

“Innoventions” of Flanagan HS (Gold Medal – 94.925) focused on no particular theme, except to demonstrate that there’s no flurry of notes the ensemble can’t play to near perfection. With no visual elements such as a guard and nothing other than a couple staircases and a set of stacked risers, the emphasis was solely on the awesomeness of the finger-busting music. The musical pyrotechnics weren’t flowery for the sake of being flowery, but seemed purposeful throughout the entire show.

The prime visual focus of “The Heist,” presented by Greenfield Central HS (Silver Medal – 94.750), was a geodesic dome framework that protected an attaché case of value to potential thieves. The massive ensemble of over 60 woodwinds and brass produced a sound as symphonic as it was powerful, especially in the low brass that shook the rafters with intense, long low notes. And how should one steal said attaché? Why, just pick up the dome and go underneath while the rest of the ensemble is out of view.

Cleveland HS (Bronze Medal – 91.000) sailed into the heavens during “Beyond,” charting the course of exploration from lift-off through the awe of discovery in space. Forming a planetary orb, the winds rotated the form through space before dissipating into smaller space forms. One member then demonstrated the effects of weightless movement in no gravity. The entire show looked to space travel as a thing of wonder to be embraced and not feared, particularly for the possibility of untold discovery. 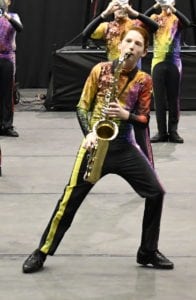 In “Spectrum,” Father Ryan HS (4th – 90.525) explored the gamut of sounds that contributes to making life more interesting. Neon banners representing sound waves were unrolled across the floor, accompanied by eight large vertical tubes of different brightly colored powder activated by drummers pounding on the bottoms of the tubes. Costuming also covered an artistic spectrum of colors, the variety of bright colors on and above the floor acting as a visual “wow” in accenting the music.

“Before the Dark” started with the entire wind section of Jackson County Comprehensive HS (5th – 90.100) doing an interpretive dance before picking up their instruments. What followed was an intense study in rhythmic power and melodic dynamism, interrupted by a chorale of supreme tenderness that somehow didn’t get buried by what came before and after. With the entire ensemble wearing vibrant yellow costumes that lit up the floor, it’s unlikely the dark could stay dark for long.

Plymouth HS (6th – 88.263) told the story of “Medusa,” the mythological being with snakes for hair that would turn anyone to stone that dared looked at her. With the musical program set to the ominous strains of Barber’s “Medea” and a small guard complement dressed as the title character, one unfortunate member actually looked at her and became immobile. After a large black silk sailed over the floor, Medusa’s head was produced; proving band students also shouldn’t be messed with. 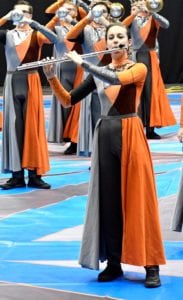 Rhythm X (Gold Medal – 97.475) was one of the only groups that set their grounded percussion up front in “With a Twist.” The complexity and clarity of the interwoven wind parts was spellbinding. Long, flowing gray and orange blouses were often used as billowing capes to accent the music, which included the woodwinds delivering a wickedly challenging take on a Bach Invention. One doesn’t often see a line of tubas performing with mutes, but no musical detail was left unexplored in this show.

In the ensemble’s first season, Crossmen (Silver Medal – 92.975) chose “Waves” as its theme, performed on a floor referencing the iridescence of water. Most of the winds opened the show without their instruments, producing wave effects with the sequential movement of their prone bodies around a long arc. Musical effects also conveyed the sense of waves via cascading waterfalls of chords, followed by an extended routine continuously manipulating a long strip of reflective material into a variety of configurations.

STRYKE Wynds (Bronze Medal – 92.550) performed “Cirque Electrique” in front of six large screens that projected different colors to fit the mood of the dynamic symphonic-rock music that was currently being performed. There were also lights inside the bells of the saxophones, and each of the brass instruments had a strip of colored lights that were activated halfway through the show. Long a domain of marching percussion, the colored lights added an interesting touch to the wind instruments.

FIU Indoor Winds (4th – 83.200) presented “Aquatic” without a special floor, something rarely witnessed in this age. The show opened with a little boy talking about enjoying performing magic tricks, his first trick unleashing the performance of the winds playing the theme to the fanfare of “The Abyss.” The boy eventually learned to control the movement of the performers and tempo of that movement, directing them to and fro around the floor per his whim and desires.