The WGI Winds World Championships in Dayton, Ohio, now in its fifth year of existence, hosted 45 units from 16 states and one European country. Most groups utilized a special floor covering to convey the theme, with some choosing to go all in on a storyline and some focusing solely on the music as the storyteller.

Increasingly, more groups are utilizing rhythm tracks for most of the percussion contribution, some not even having a percussion section and most others having a relatively small complement of percussion. When groups have percussion, the section was sometimes just two members—one a drum set player and the other playing synthesizer. This is largely due to many of the lines in both Independent and Scholastic divisions also having indoor marching percussion lines competing both the same weekends of the WGI regional events and the final week of the season.

Although there is a defined structure, the rules of what can be done in Winds are fairly open; so each year, more ensembles feel increasingly free to experiment with different and unique setups, visual complements and instrumentation. The result is a variety that keeps things fresh for the audience and keeps people guessing about where WGI Winds will go from here.

As Wayne Markworth, Director of WGI Winds, states: “We are really excited about the jump in performance quality this year in all classes, and the variety of styles and instrumentation is fascinating.” 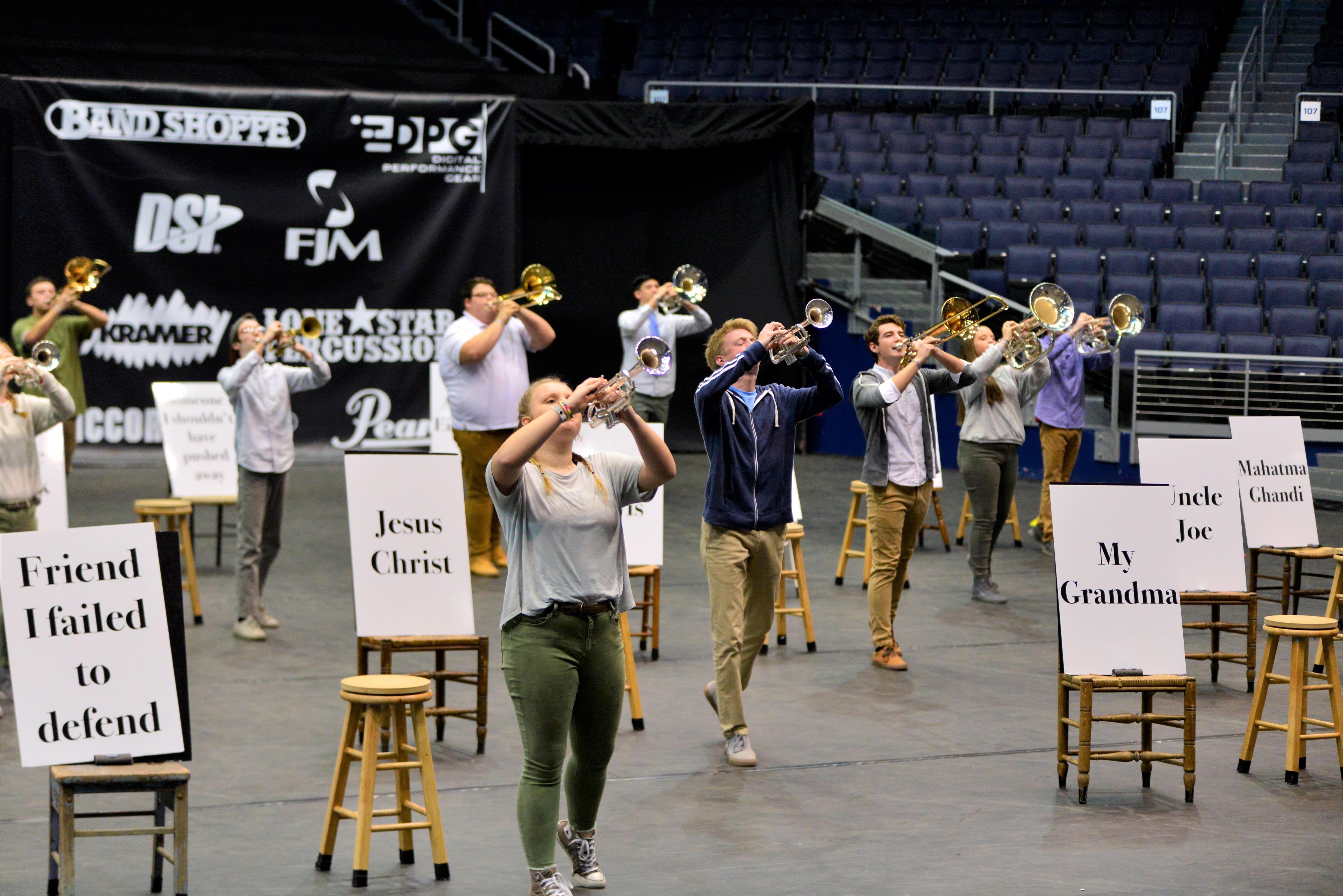 “Sit” of South Jones HS (MS) (Gold – 94.05) was partially about sitting down with one another to work out and resolve conflict before it started. Of particular fun was watching the members pivot on the rotating tops of the stools. A particularly poignant segment was when each member revealed whom they would love to sit with and have a conversation, whether a historical figure or someone to whom they’ve never said what needed to be said. 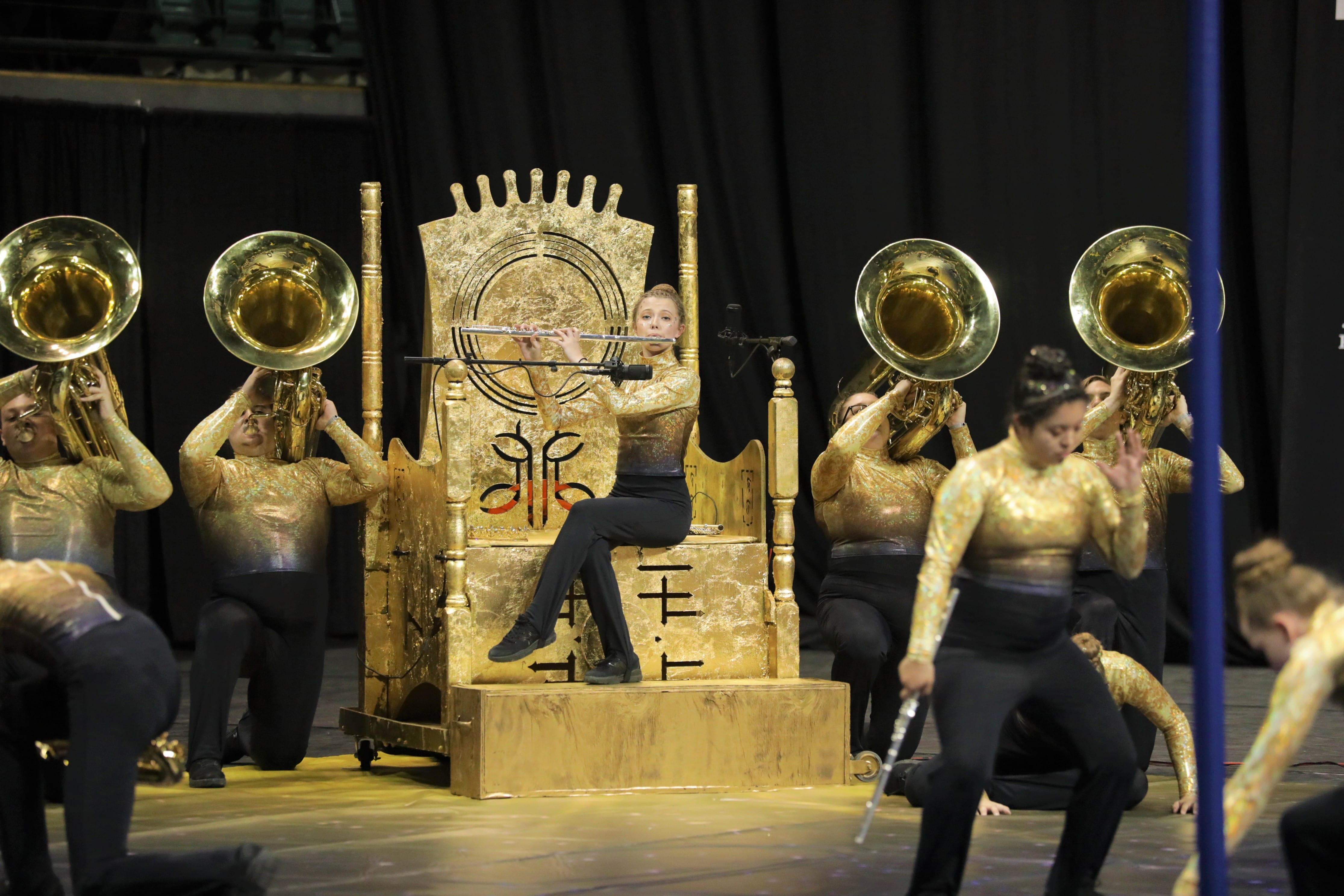 Dazzling stars on the floors and as props across the front highlighted the story of “The Stars Align” of Lake Hamilton HS (AR) (Silver – 91.125). The show told the story of a queen in the cosmos heavens having to decide which of her two daughters would succeed her as ruler, with the wicked daughter claiming the throne as her own. Ultimately, the queen and the good daughter restored order and the cosmos sparkled in peace and serenity for eternity. 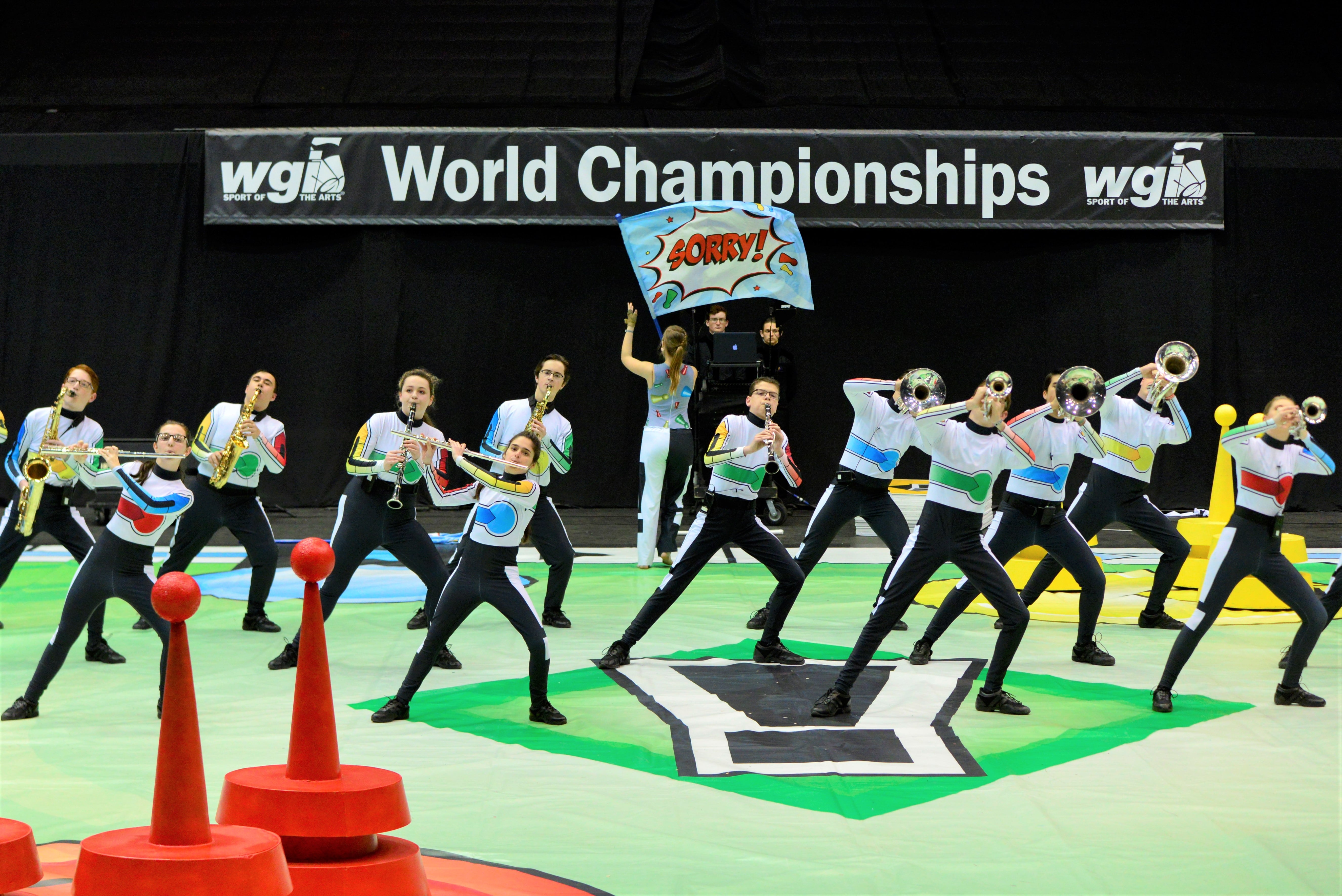 “Sorry, Not Sorry” of Father Ryan HS (TN) (Bronze – 87.538) was visually inspired by the Hasbro board game, “Sorry!,” performed on a floor painted as the game’s playing board. The game pieces, named “pawns,” served as seats and actual game pieces that led the audience through the competition to get one’s color of pawns to the end before the other players, with green being the ultimate winner.

“Cosmic Dance” of Miamisburg HS (OH) (4th – 86.163) utilized Michael Kamen’s “The New Moon in the Old Moon’s Arms,” with two large images—one of the sun, and one of the moon—as the dominant visual backdrop. In the middle of the show, the moon eclipsed the sun in a cosmic dance between the two celestial bodies. Atypical of most Winds programs, the ensemble decided to have their three percussionists up front.

“(un)Chained” of Decatur Central HS (IN) (5th – 86.075) started entirely behind several lengths of sets emblazoned with images of a long chain. Members were seen waving links of chain before the woodwinds poured out from behind the wall, soon to be joined by the brass. The 16 individual segments of wall were continually manipulated to create new performing spaces for the turbulent music; eventually, the walls turned around to show the chains broken as the members tossed away the chains to the suddenly victorious music.

A sparse color spectrum of black, white, and gray and the question, “Who Am I?,” opened “Introspection” by Cooper City HS (FL) (6th – 85.875). Seven sets of reflective panels across the back allowed the members to demonstrate their continuing introspection by seeing and reacting to their reflections. Performed to a soundtrack of rhythm and vocals, this was one show that emphasized the “Winds” in “WGI Winds.”

“Youth of the Nation” of Bellevue East HS (NE) (7th – 82.50) started with a recording of Barack Obama asking the country’s young, “What’s your contribution?,” reminding them that the future of the country depends on their future actions. Some nursery rhyme songs such as “London Bridge” joyfully explored the innocence of youth. The show ended with all but one flute player disappearing behind a descending scrim of grown adults dressed according to their occupations. 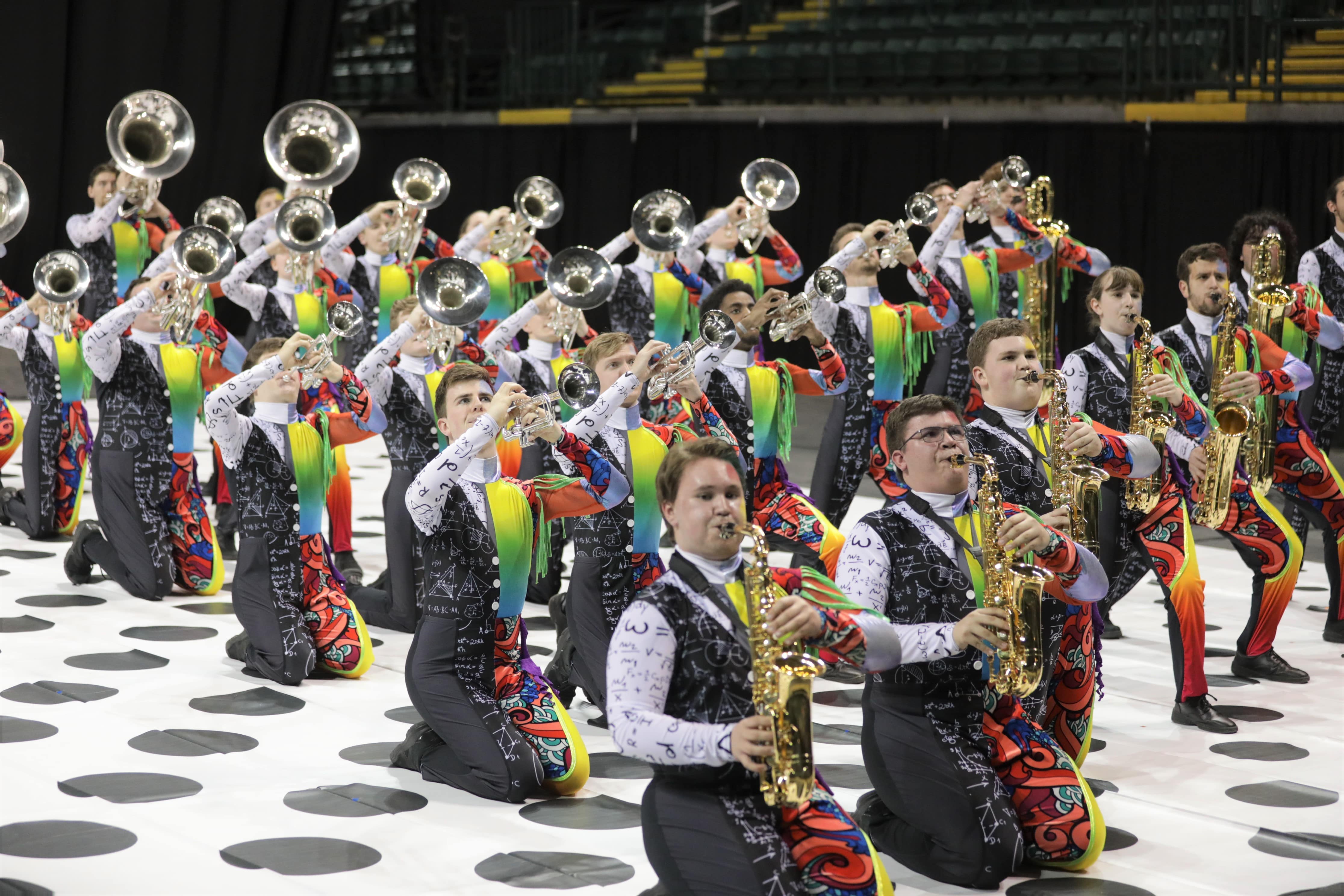 Chromium Winds (IL) (Gold – 93.15) opened “Left to Right” facing away from the audience, spreading out to a repetitive proclamation of “To the Side.” Three percussionists played along to a recorded rhythmic track as the winds nonchalantly threw down an extended series of fast scale runs during the most frenetic moments. As the show progressed, the drill did indeed take the ensemble from the left to the right side of field, almost imperceptibly in its process. 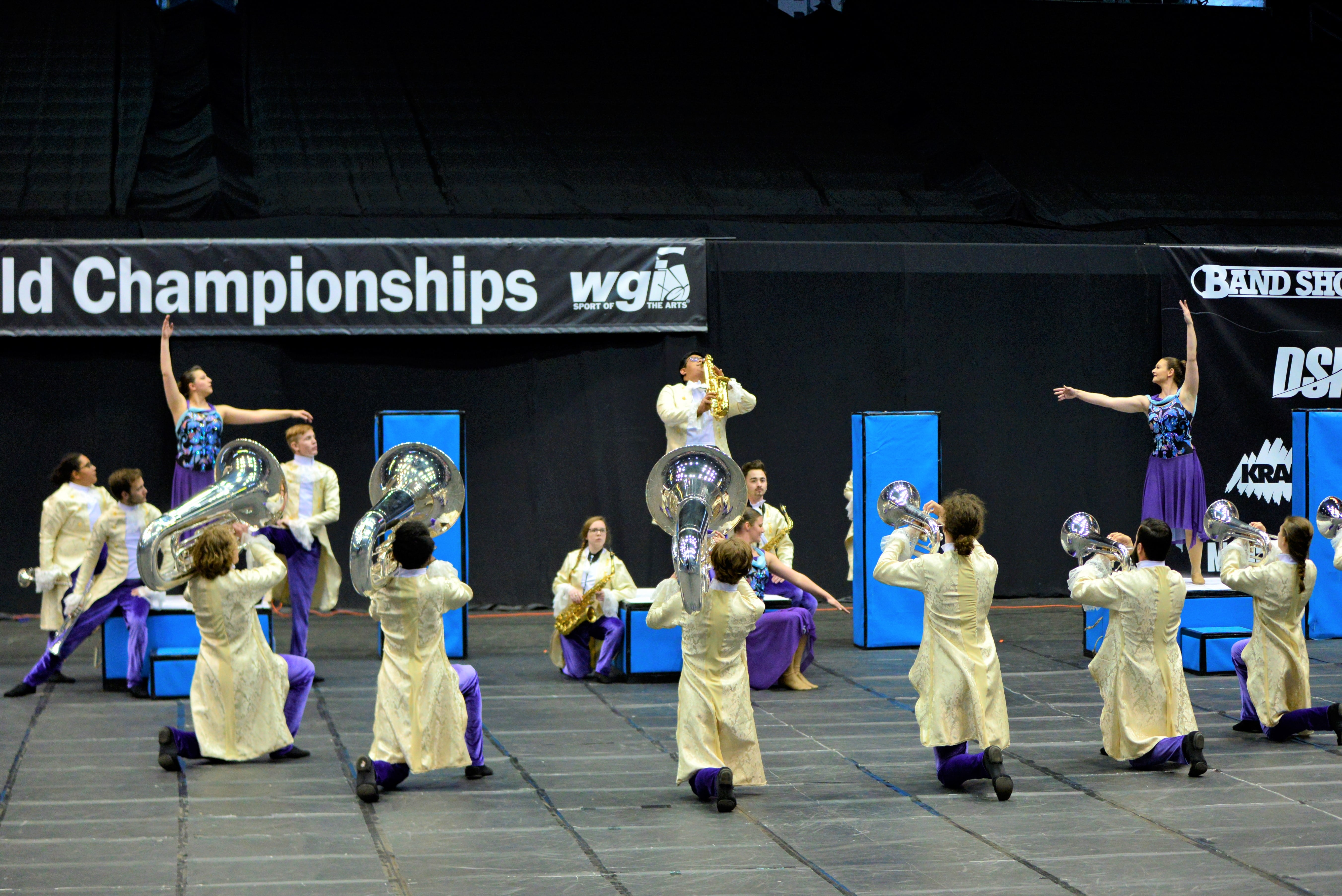 Blue Knights Winds (CO) (Silver – 91.75) performed “a little variation,” inspired by Bach’s “Little Fugue in G minor.” The ensemble played the famed classic work in a variety of contrasting styles, including a 1920s-type free-for-all—complete with three dancing flappers. Thinking out of the “Bach(s),” the program took the master’s famed work to destinations Bach could have never imagined—totally removing it from the concert hall and putting in on display in the dance halls of America. 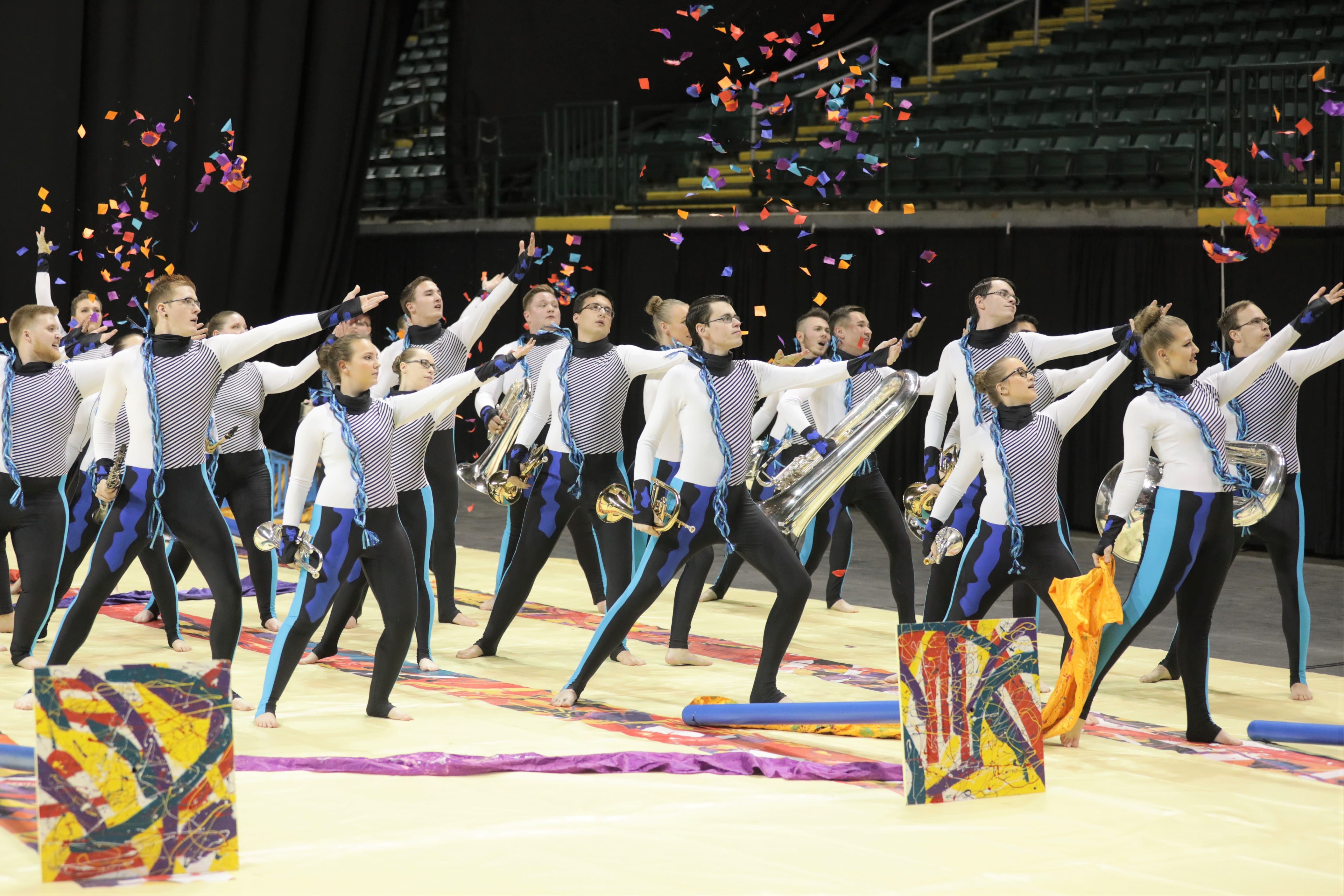 “Jackson Pollack’s Blue Poles” by Inertia Independent Winds (OH) (Bronze – 89.213) opened with a narration by the artist explaining his works, which were perhaps the most radical expressions of paintings ever witnessed by an intrigued-yet-confused audience. The show opened with Jeff Beal’s “One Man Show” from the movie, “Pollack,” with a member in the corner of the floor replicating the creation of a Pollack drip painting. The production ended with colored banners spread haphazardly across the floor, as if streams of paint from the artist’s hand.

“Crazy Genius” of Horizon Winds (FL) (4th – 87.713) was largely a rollicking good time of vivacious jazz licks, starting with “Crazy Equals Genius” by Panic at the Disco!, interrupted by the dulcet and restrained tones of Patsy Cline’s pop classic, “Crazy.” The show played off various visual elements that were at times unexpected—such as the performance of quirky body movements that seemed to contrast with the music, allowing the viewer to fill in the blanks as they saw fit about what was crazy.

At the start of “Show Me,” each of the members of Beatrix (The Netherlands) (5th – 87.30) was connected to a central character (known as “The Entertainer”) with individual lengths of wire. The emotional pathos of “The Hymn of Acxiom” was especially riveting, totally contrasting the high-impact jazz that surrounded the melancholic work. “The Entertainer” lost control of the others, but regained control at the end when she decided to just be one of the gang.

Genesis from Point University (GA) (6th – 86.525) performed “Lean,” a jazz suite that was interpreted with a variety of leaning poses, including some members leaning against the feet of prone fellow members. A long ramp to the side also conveyed the theme, serving as a pedestal for the members. A soulful rendition of “Lean on Me” had the audience clapping along, especially at the end when the members set down their instruments and sang the lyrics a cappella.

Music City Winds (TN) (7th – 82.075) used chairs to sit and stand upon during their performance of “Where Words Fall,” based on the contrasting movements of Rachmaninoff’s “Variations on a Theme of Paganini.” This was one of the very few ensembles to ever bring bassoons out on the floor, and to even march with them, which isn’t an easy thing to do. The lovely “Variation XVIII” had the members sit down in an orchestral configuration, as if on stage in an orchestra hall.