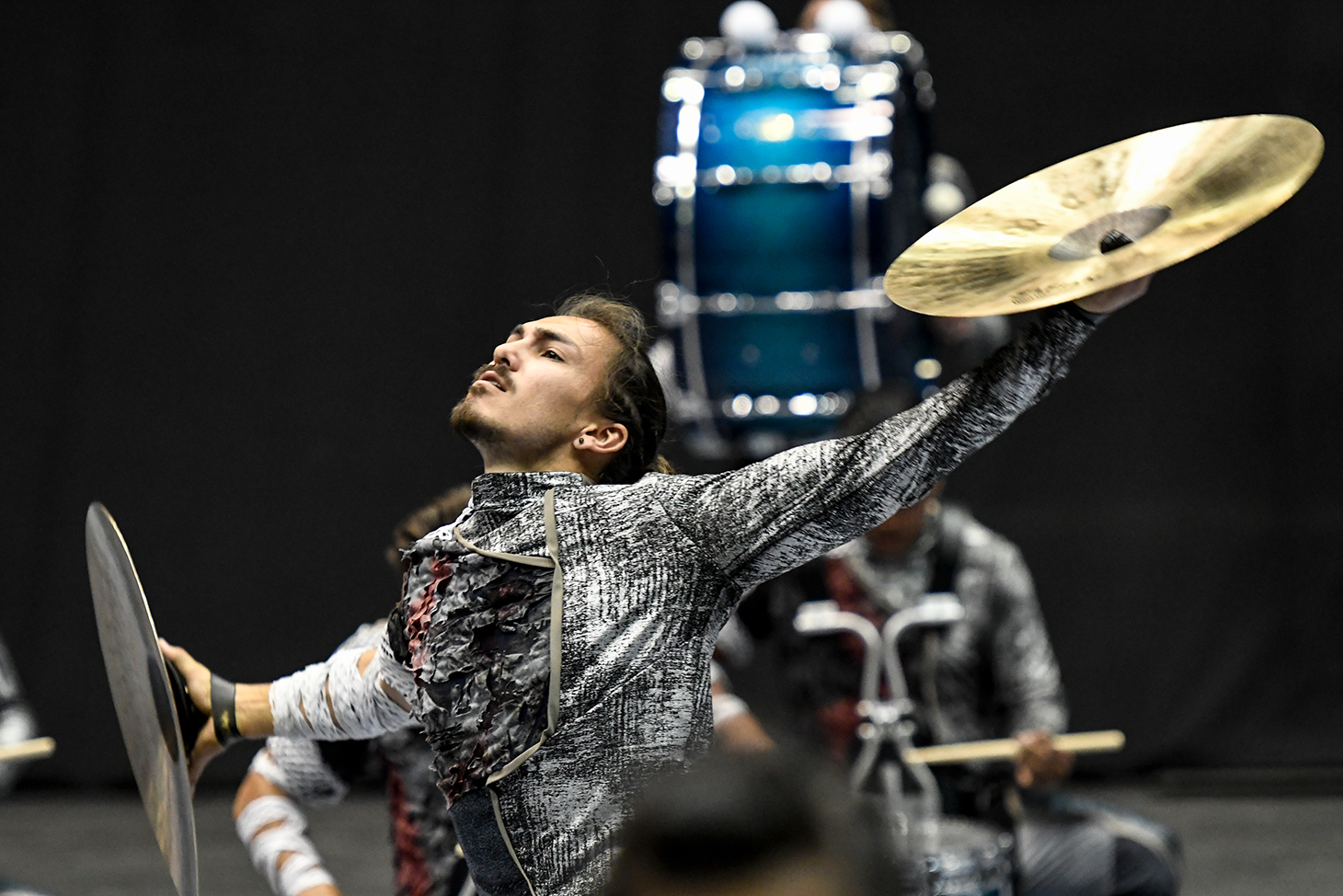 Broken City (CA) (Gold Medal – 98.850) set the record for highest score in the class and captured their first title with “Cede.” Taking inspiration from situations where one must decide to fight or yield, the show allowed both performers and audience to input their own meaning and life experiences into the production. A music book that was extremely thinly scored at times left no margin for error, and the virtuosic performance quality was rewarded handsomely by the judges. Adam Watts’ agonizing Let You Win provided a consistent undertone for the program, as lyrics about discord and surrender packed a potent emotional punch. Tall white banners rose up on vertical frames at the conclusion, symbolically waving the white flag to relinquish the fight.

Pulse Percussion (CA) (Silver Medal – 97.600) portrayed the futility of ongoing conflict in “Divided We Fall.” Drawing motivation from The Green Table, a landmark dance work where diplomats argue at a negotiating table, the show examined cycles of confrontation and peace. John Lennon’s anthem Imagine provided musical motivation, as the floor and flats used imagery of the Lennon tribute wall in Prague. Chain link fences with Conflict, Struggle, Hope, and Peace had note cards attached written by members with messages related to each word. Choreography depicted intense negotiations at a long green table at the beginning, as the show moved through cycles of calm and strife, ending back at the same table with the two sides at odds.

Music City Mystique (TN) (Bronze Medal – 97.5125) utilized cutting-edge electronic sounds with their battery sections in “MEDIUM.”  Philosopher Marshall McLuhan coined the phrase “The medium is the message’ in his book Understanding Media, with the idea being the nature of the medium is more important than the contents of the message. The group applied his concept to indoor percussion with voiceover quotes from his views. Abstract structures with pink diamonds on top illuminated in different colors as the show progressed, providing a futuristic look. During the closer, the line asked “why are we here?” The answer was percussion as both medium and message, with the line emphatically shouting “WE ARE THE MEDIUM!” 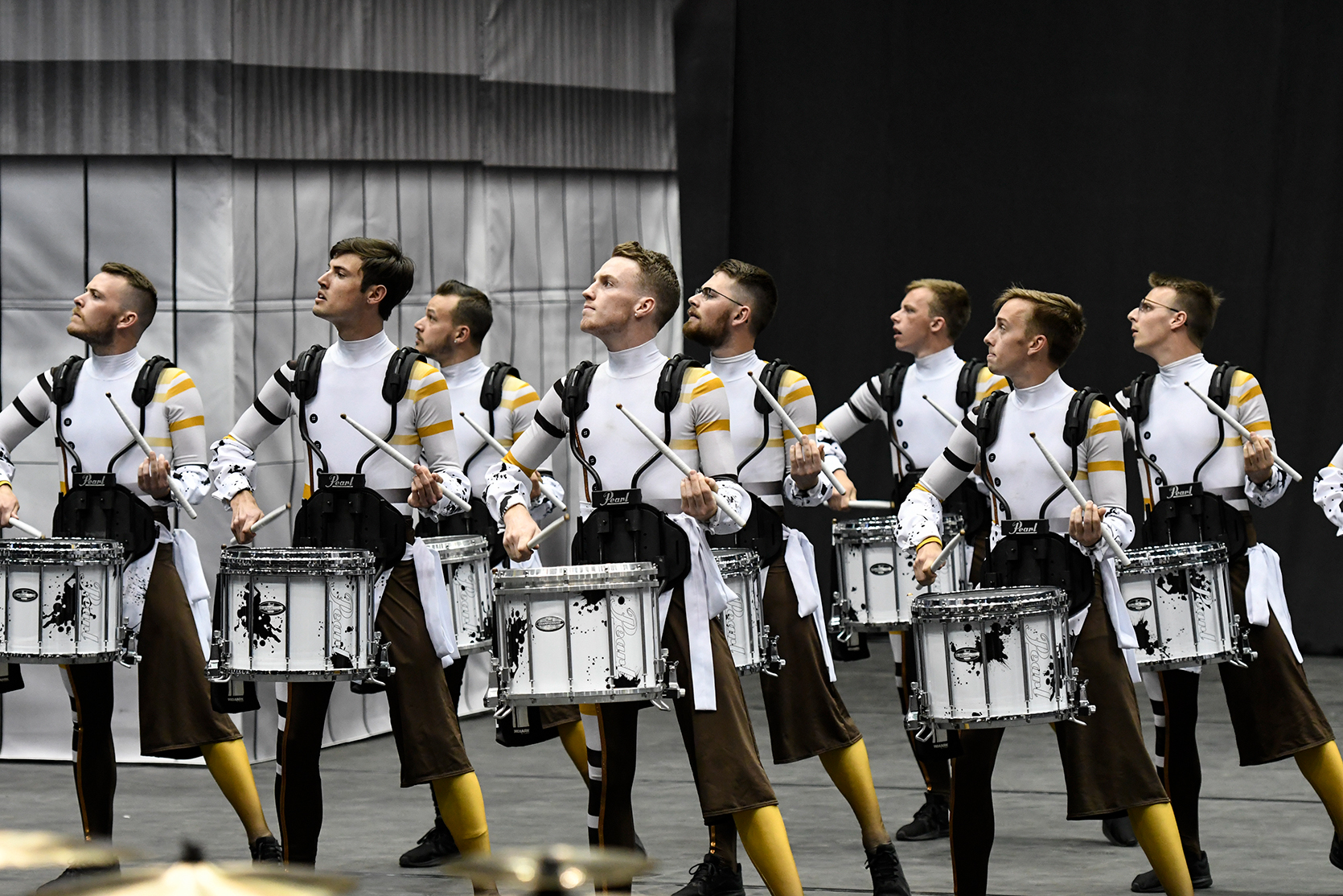 Rhythm X (OH) (4th – 97.225) combined high-level gourmet cuisine with high-level drumming in “ALINEA,” named after the famed restaurant in Chicago that will set one back over $300 a meal. Set in seven movements representing a seven-course meal, the program began with an appealing appetizer before moving into deception, inspired by the restaurant’s strawberry tomato (a tomato made to appear as a strawberry), musically depicted by snares playing but tenors are heard. After moving through more courses, a guitarist provided a light palate cleanser before the luscious percussive dessert to close the meal. One of the wait staff pulled up a chair at the end, inviting us to sit down and take a bite!

Inspired by Frank Herbert’s novel Dune, defending champions RCC (CA) (5th – 95.475) presented “He Who Controls the Universe.” The invaluable spice, said to extend life and expand consciousness, was contained inside a box at the front with a red glow emanating out on a bleak setting with a drab color palette. A voiceover explained many will seek the spice, but few will find it. Throughout the production, members tried to get to the box, but were stopped by others. A fantastic guitarist combined with a keytar player to create exotic sonorities. The quest for wealth and power was enough to overcome even the heartiest soul, as a drummer seized control of the spice, causing the line to collapse. 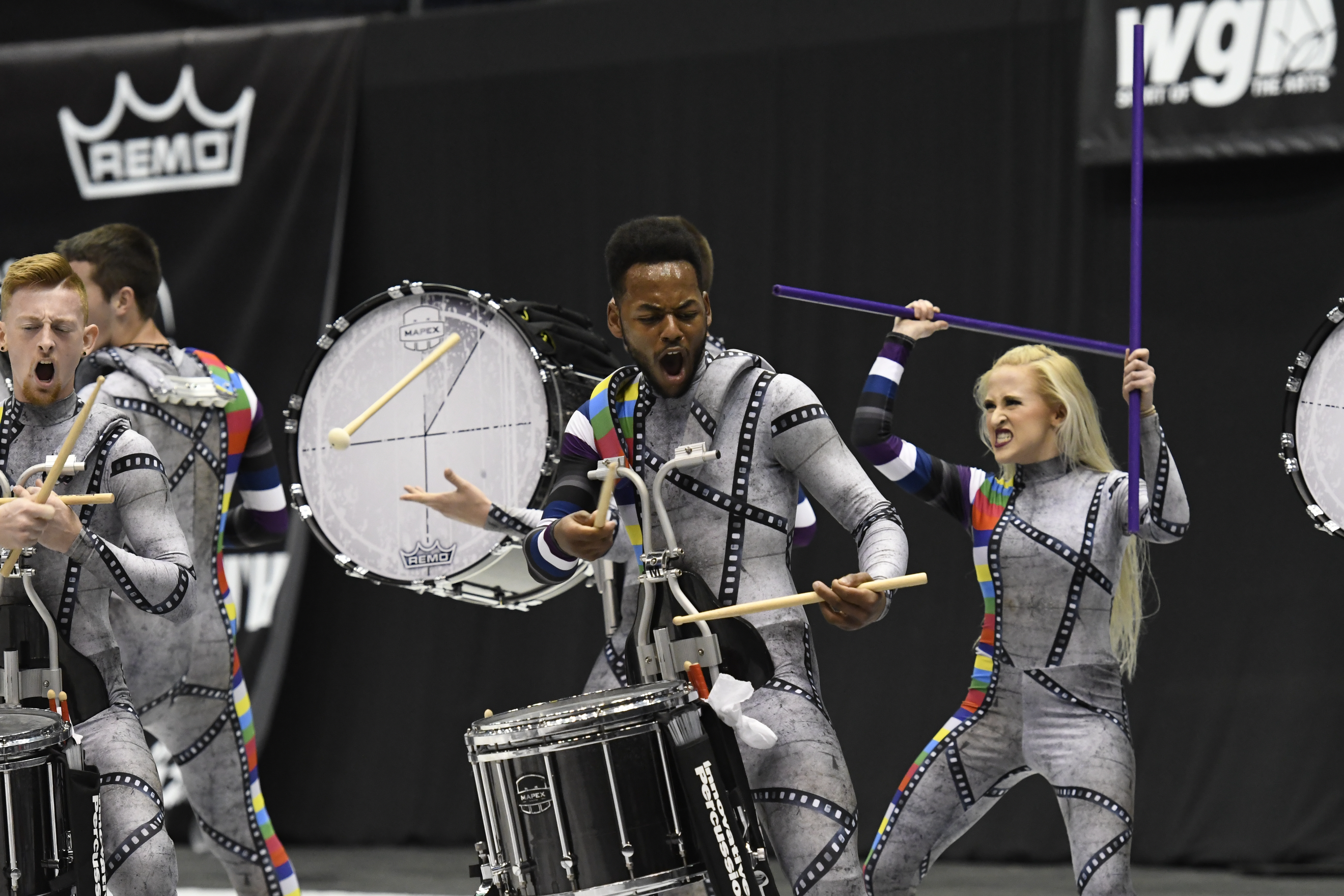 Incorporating large video monitors, Matrix (OH) (6th – 93.800) demonstrated that while it’s easy to get lost in the fantasy of cinema, real life is much more interesting in “Life As A Movie.” A movie camera followed the line through the entire show, as the screens showed villains, heroes, a whimsical homage to Charlie Chaplin, the sadness of war and the heartwarming charm of happy endings. Clips of the line’s 2013 “Covered” production shown on the screens went with the identical drill on the floor as the line reminded us the best character we can be is ourselves. The group encouraged us to simply lead our lives, and one day perhaps our own stories will be on the big screen.

Monarch Independent (TX) (7th – 93.425) began “The Secret Zoo” with an announcement for guests to leave, as it was closing time. Once the visitors had gone, animals of different colors came out from metal frames of different sizes representing cages. The battery spent much of the program intimidating the animals and managed to put them back into cages, but a mesmerizing uncaged pink creature distracted the line, allowing her comrades to escape. The tables were turned at the ending, as the beasts chased the entire battery into the cages. One drummer thought he was going to sneak away, but the animals grabbed him, tossing him in with the others.

POW Percussion (CA) (8th – 92.625) performed “Dia Del Los Muertos” with large orange skulls and black and white photos of departed family members on backdrops, and a small altar with 8 x 10 pictures and candles. The program, named after a Latin American holiday celebrating the memories of deceased family, featured performers with faces painted as skulls. With whispers of “Remember me” heard throughout the program, a woman in a red dress with a sheer black head covering played her trumpet while her living husband played guitar. The duo embraced at the end as the man donned a skull mask after dying of a broken heart, reuniting with his wife. 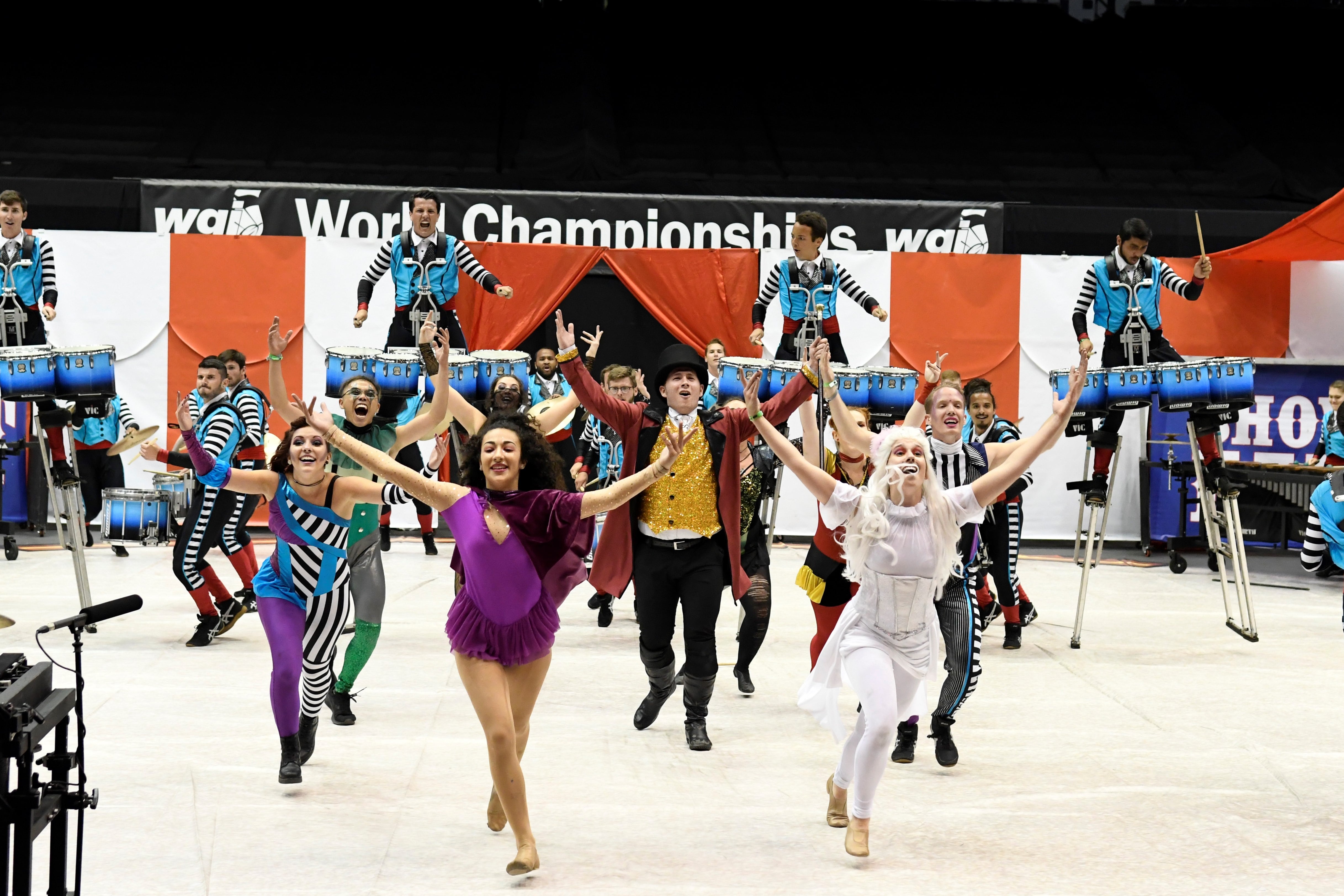 Infinity (FL) (9th – 92.2125) brought the wonder of the circus to the arena in “THE GREATEST SHOW ON EARTH.” A young girl opened a chest under a vacant big top and put on a top hat. Soon, the floor came alive with thrilling acts of percussive acrobatics. Led by a ringmaster, the program featured juggling cymbals, a woman carrying a parasol walking across a beam with no net, and most impressively, the tenor line playing (and marching!) on tall stilts. When the big show was over, the girl put the top hat back in the chest as the ringmaster waved goodbye, the three rings empty once again as the audience rose with a thunderous standing ovation.

A young indie pop artist gave his mix tapes to anyone who would take one at the start of “Fringe” for George Mason University (VA) (10th – 90.875). As the program progressed, the movements represented different songs he wrote in a variety of styles, all contemporary. The eclectic urban set contained a makeshift commuter train with orange seats and rails for standers to hold, and a fountain in the middle of the floor. In what he called “experimental stuff,” the line blew in the ends of poles like didgeridoos and Bass Jesus appeared, a robed, bearded man playing a bass drum. The high energy ending featured a heavy dose of wicked licks, getting the crowd on their feet. 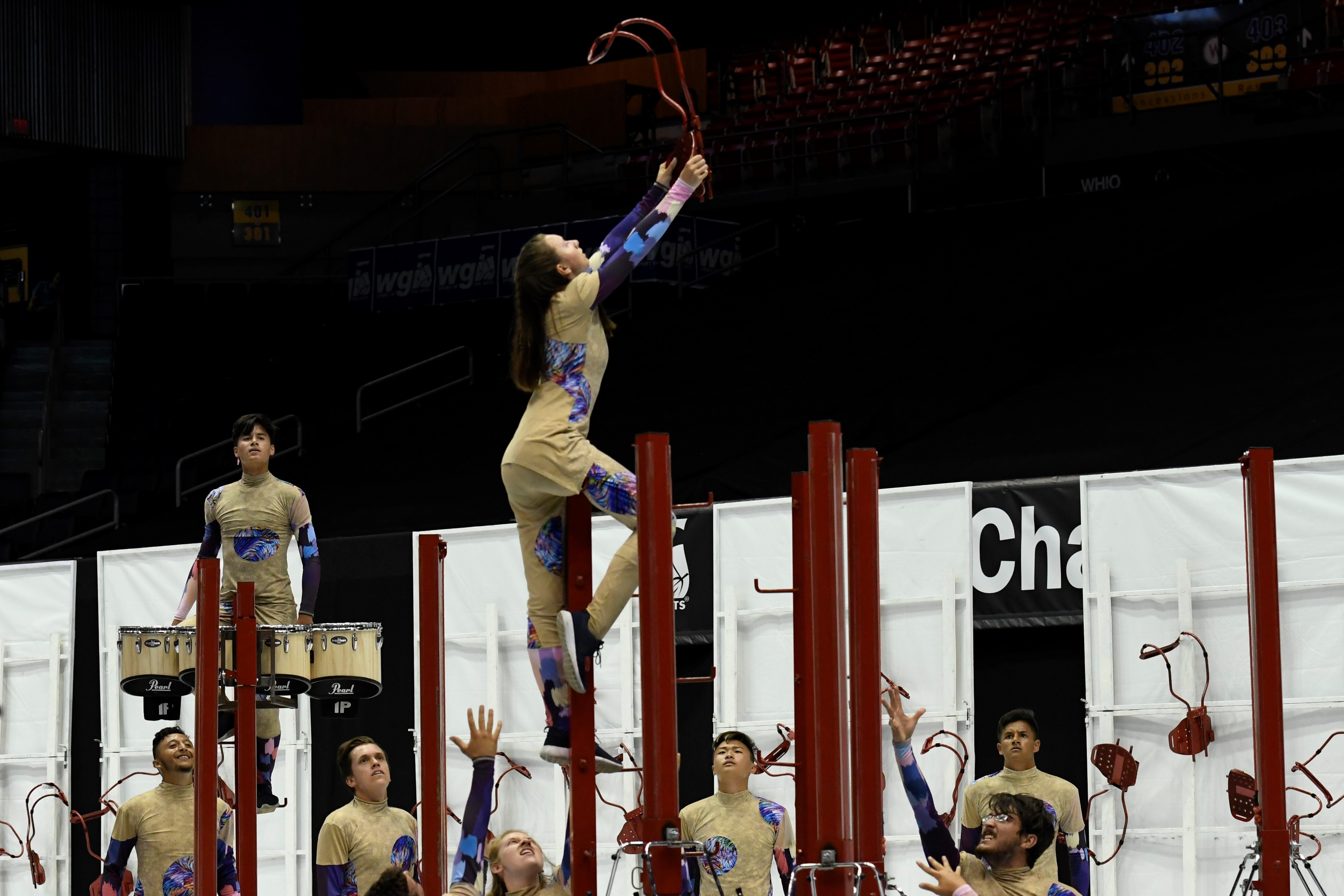 Who needs drum harnesses? Not Dark Sky Percussion (CA) (11th – 90.6125). “PHRE” had an ingenious design where the drum harnesses were hung on lattice racks at the back of the floor. Instead, the drums were hung on a multitude of red poles, which raced around the floor at impressive speeds. Drawing from a Chinese proverb about a man who had such a lengthy dream about a butterfly that he wasn’t sure if he was a butterfly or a man, the program created an abstract dreamscape with subtle butterfly imagery. The drums were raised, lowered, and rotated as needed, including dazzling snare and tenor features played atop the poles eight feet in the air.

United Percussion (NJ) (12th – 90.2875) paid homage to one of history’s great master composers in “Master of Silence.” As Beethoven aged, he lost his hearing while penning some of the most famous works in music. High-pitched hissing represented his growing deafness and descent into madness. Large tubes unrolled strips of thick black tarp, covering more and more of the floor to depict the worsening condition.  With a music book of well-known Beethoven works, the show ironically ended as the entire floor was engulfed in black with the line pounding furiously to Ode to Joy, instruments dropping out little by little into complete silence.

With the floor framed by large sewing needles, Cap City Percussion (OH) (13th – 88.200) utilized numerous long elastic strands to connect members to giant pieces of an old Singer sewing machine, and also to each other in “Bound By A Thread.” Drummers were attached to their instruments by stretchable strips and even by hooks in the tarp, sometimes controlled against their will. In the Finale, cables stretched across the floor from the tops of the props, and then strands from the cables attached to the battery, creating a canopy as the line moved with amazing synchronization, falling at the end when breaking free from the threads. 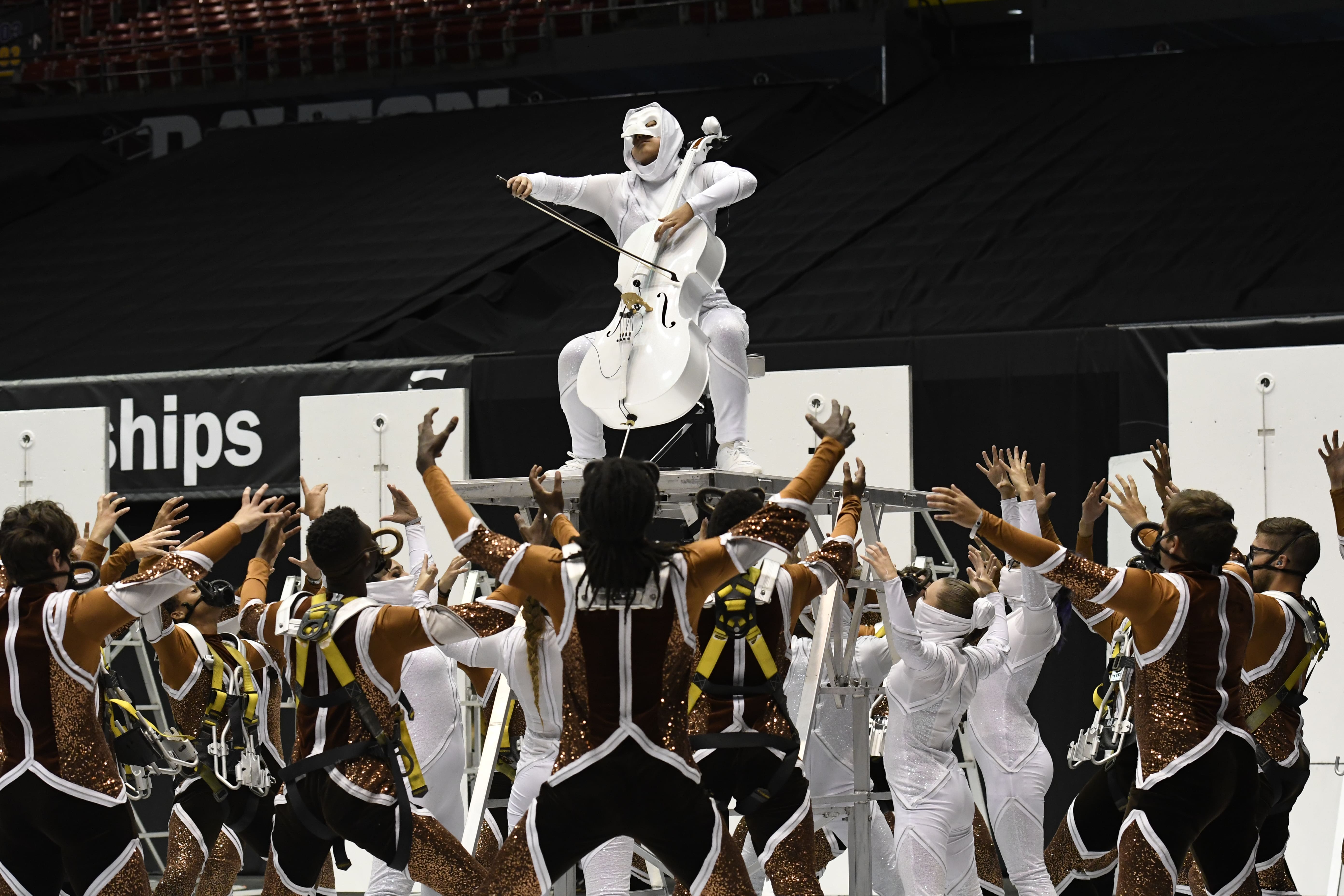 STRYKE Percussion (FL) (14th – 87.900) presented a disturbing look at substance abuse with “The Addicted.” With a screaming face on the tarp, the line donning gas masks, and a cello soloist in white wearing a plague doctor’s mask representing the drug, it was evident before the first note this would not be a run-of-the mill show. Drummers tried to crawl away from their addictions, but kept being dragged back with thick ropes. The snare line played suspended in air from backdrops, giving a sense of a high. The desperate members tried to escape the ropes of addiction at the ending¸ with only one man breaking free.

Atlanta Quest (GA) (15th – 86.750) opened “Lay Your Burden Down” with long, heavy poles laid on shoulders of members. Long, teal elastic strands attached to the top of the poles represented burdens bore by the line. As dancers tried to move away from the poles, the strands kept pulling them back. The music, inspired by Chris Cornell, most noted as lead singer for Soundgarden and Audioslave, was a major source for the score with soulful vocal samples. At the intense ending, the line tore off teal fabric attached to their costumes, dropping them on the ground to symbolically leave the burdens behind. 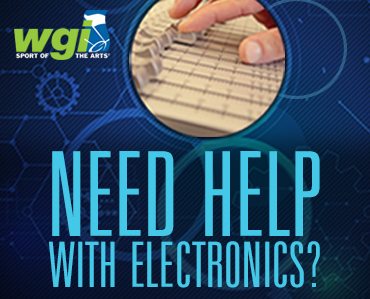