With the faces of famed American orators on Fishers High School’s (Gold – 97.55) tarp — names like Abraham Lincoln and Martin Luther King Jr. – who spoke so strongly for what is true and just, “A Self-Evident Truth” examines what it means to be an American. As flags sit high on flag poles throughout the floor, the guard moves with tremendous elegance and grace, yet also with power and self-belief; indeed, they carry the message. The use of lines throughout the flooring gives the audience clear lanes for the equipment sequences, each moving with quiet grace and resolve. At once, the show can speak so softly and yet resonate so loudly, firm in the hearts of the audience. As we hear the familiar “glory, glory hallelujah” the guard ends the show in a resounding flourish, hand-in-hand, saluting both the flag and the audience.

Arvin High School’s (Silver – 96.25) precise weapon work highlights the introductory phrase of “Yugen,” followed by a movement sequence that takes advantage of the full space and delivers a unique partner phrase near the end. The black-mesh costumes provide an appealing aesthetic against the flooring, which is all-black with splotches of white dotted throughout. The color guard moves in flowing shapes, which allows the intricacy of the equipment work and the soft, beautiful piano work to captivate the audience. Not a single step felt wasted, not a single toss unnecessary. This show demanded attention and had it, pouring heart and soul into every second, every breath.

The set pieces certainly embody the name of Dripping Springs High School’s (Bronze – 96.10) show, “Wonderland,” with a large sign and an amusement park ride in opposite corners of the tarp. The performers, dressed in red and black bodysuits, flow throughout the floor with a deliberate, almost longing emotion to them, as if wishing for something no longer there. The equipment sequences, drawing out ever more emotion by a brief bit of silence in the soundtrack, use the winding lines on the floor to ample visual effect. There is emotion throughout the performance, from the way the props call out to better days no longer here and most especially in the faces of each member of the color guard. The ending flag sequence grabs the heart and never relinquishes it.

McNeil High School (4th – 92.65) bursts out of their door, situated in the far corner, and grabs the audience with their captivating movements, clad in purple-pink bodysuits that mesh beautifully with the tones below them and later the elegant silks dancing above them. “Reminiscence” tugs at the heart, pulling you by the music and most of all by the incredible performers to think to those days of the past – the days when perhaps you, too, rode on a swing like the one on the beautiful flooring. Such images warrant a gentle, soothing performance; the McNeil color guard delivers one in spades, reaching to the top row in the audience.

Words bounce through our heads as we first see Ben Davis High School’s (5th – 92.20) green off-white tarp – in part because words seem to bounce all around the tarp itself. The guard moves gracefully, presenting new shapes with the nearly 20 columns placed throughout – a cross here, a line there – through which they throw tosses and work with their flags. The staging here is seamless; the props are often moving but always in a fluid, show-pleasing way. “War of Words” makes tremendous use of the floor, forcing us to confront just how overwhelming all the words in our lives can be.

Little Elm High School (6th – 92.05) opens their show surrounding a small bridge. One performer stands atop it and those below reach under and stretch out with red silks. What does it mean to love? Does it allow complacency, or must you move or be moved? There is no lack of that in “Servant of Love,” a show brilliantly staged with stunning flag sequences that reach right into the heart of the audience as the music queues. Does love entangle us or does it set free? Is it calm and gentle or panicked and hurried? Little Elm challenges us with these questions throughout their thought-provoking show.

Oranges. Reds. Pinks. One look at Oviedo High School’s (7th – 91.95) show and you see color everywhere; on the tarps, on the bodysuits, on the silks, on the sabers and on the props. The vibrancy of “Pallaton” reaches out and grabs the audience, with well-designed features and effortless staging that makes great use of the stunning tarp. Hypnotic weapon work thrills in the near-middle of the performance, just as the music edges forward in tempo. As the soundtrack plays, adding hints of tension throughout that culminates in silence right as a flag movement builds to a stunning crescendo. Strength.

Magenta and cream hues greet the eye as East Coweta High School (8th – 91.50) takes the floor. The tarp, the props and the costumes of “Ventus” all mesh wonderfully, even more so once the equipment work begins and the show stretches out across the expanse. As the piano plays its gentle, mesmerizing tone, the guard moves with elegance, delivering precise tosses and gliding around. As the tempo ebbs and flows, the guard matches it, delivering crisp phrasing from the entire color guard. An extended dual-rifle solo drew tremendous applause, as did a saber phrase right in the heart of the floor. The warm hues match the tone of the performance perfectly.

All the familiar motifs and rhythms of classic Beatles song are used to wonderful effect by the Cleveland High School (9th – 88.40) in “The Beatles Concerto.” You hear it, you know it. The guard’s nearly all-white uniforms pair neatly with the colorful flooring, bolstered by staging that allows quite clean lines and eye-grabbing formations all over the floor. The equipment work meets the challenge of the soundtrack and aesthetics, delivering a rich, vibrant experience through each sequence. Come for the Beatles, stay for the Cleveland High School guard.

With sheets of silk in their hands, Milford High School’s (10th – 87.70) “Fallen” gives the audience a captivating early image, spread into lines, moving like wisps in the air. The tempo increases from there, with sabers now glistening toward the rafters as the soundtrack reveals a singer. Clad in gray tights and black, shimmery tops, the guard shines atop the smoky white-black flooring, making each movement pop to the eye. The energy and rhythm of a late flag sequence drew heavy applause, as did the very end, with tarp pulled close to center, the guard disappeared.

Gentle strings in the soundtrack beget soft, emotional dance movements from Seminole High School’s (11th – 87.65) “The New Chapter.” The equipment work is well staged, taking advantage of the flooring to allow multiple phrases to work throughout; a flag feature here, a series of rifle tosses there. The flooring, with a stripe of white through the heart, gives the eye enough divide to amplify the staging. The extended team-wide flag sequences drew heavy applause and gave the show its heart.

Sans tarp, Dartmouth High School’s (12th – 86.60) “Grated” instead turns to a series of rugs, placed throughout the floor to help us define the space. Dressed in green-black bodysuits, the color guard pops off the floor both in costume and in movement, creating a hypnotic cacophony of sights and sounds. “Granted” takes full advantage of the floor, giving the audience a handful of memorable equipment moments in the first half of the show. As the soundtrack changes into a more uptempo beat, the guard meets them, moving with fervor and in neat lines, ultimately to close in an emotional flag sequence. Yes, the genie in the bottle has been released!

A show that truly grabs the heart. The elegance of the early movements, made all the more tender by the dark green ensembles, sets the gentle tone for Marvin Ridge High School’s (13th – 85.15) “Fire Away.” Well-developed lines add to the equipment and flag work, all of it clean and effortless. As the soundtrack moves deep into the crowd, the performers continue to glide around with grace, planting emotion into the highest row of the crowd, all building to a wonderful pink-silked flag solo.

The image of our Earth emblazoned with bright hues amid a turquoise background greets the eye as El Capitan High School (14th – 84.30) begins to move. And fitting it is, as “Tomorrow” seeks to remind us of the hope of what a new day can bring. The movement flows, each performer nearly gliding across the world, shedding the burdens of a hard day. “Let the weight wash off of me” indeed, and El Capitan does that for the audience as the bright yellow shirts come out and its uplifting flag and rifle sequences take center stage. We are clean.

The themes of relationships – one heart longing after another, two people keeping each other upright – are found throughout Choctaw High School’s (15th – 84.25) “Hereafter.” The symmetry of the movements across the beam-like expanse of white on Choctaw’s tarp provides a beautiful look at the balance that can be achieved. As the music builds – as the singer climbs into a higher register – the guard reaches to meet it effortlessly, delivering a moving flag and weapon sequence full of intricacy and emotion. As the show culminates with every hand reaching out to the audience, we can only respond: yes, take us with you to the hereafter. 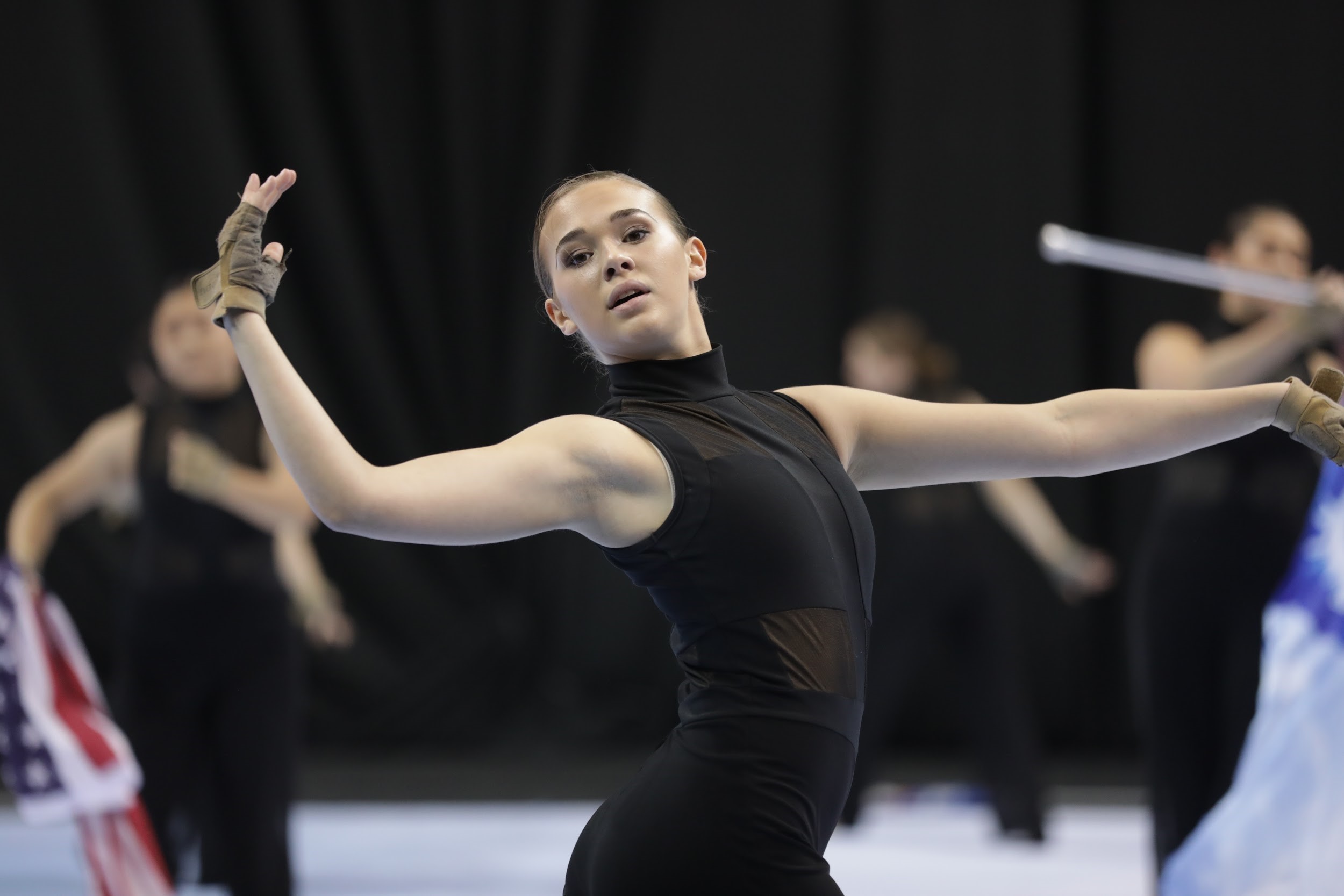 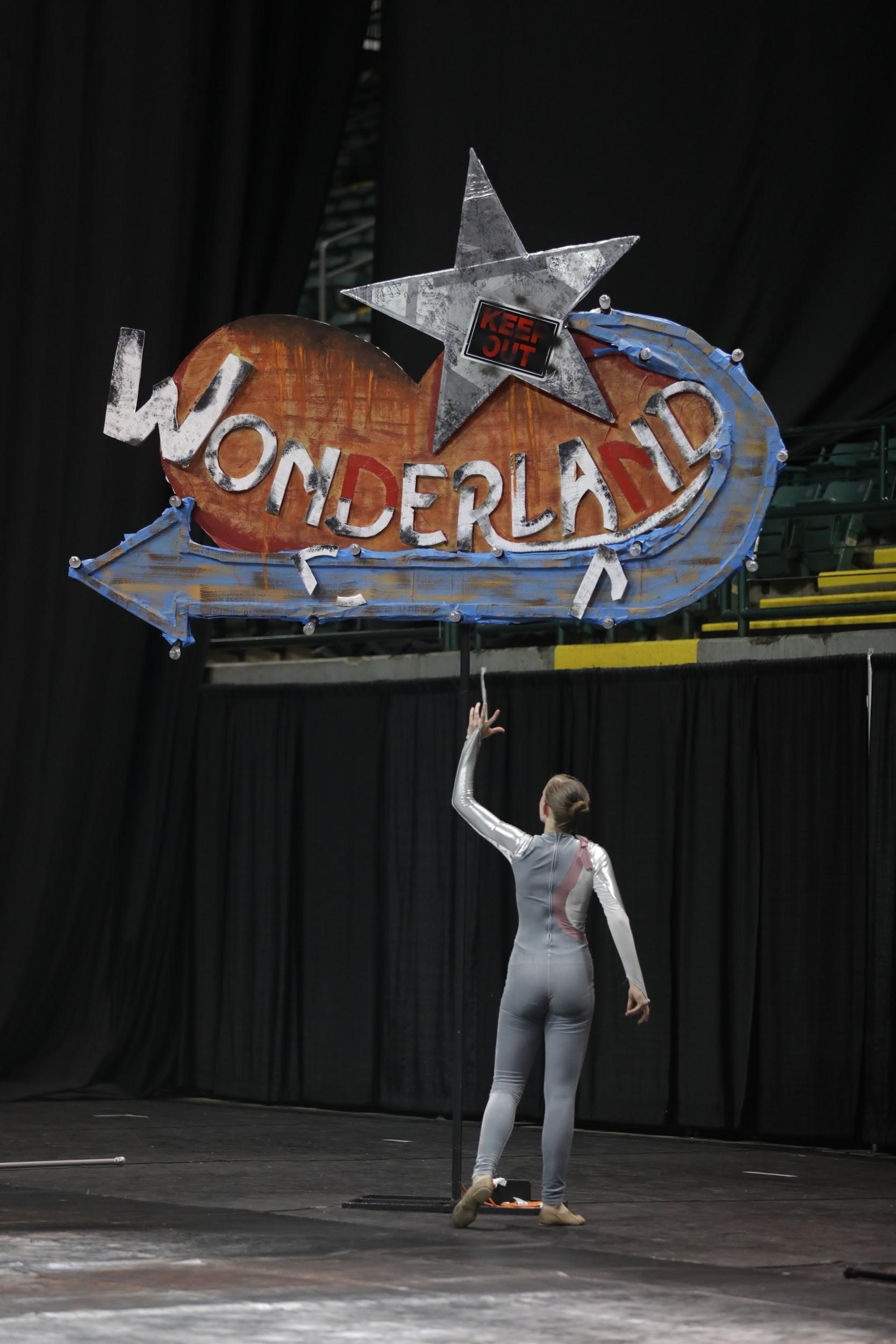 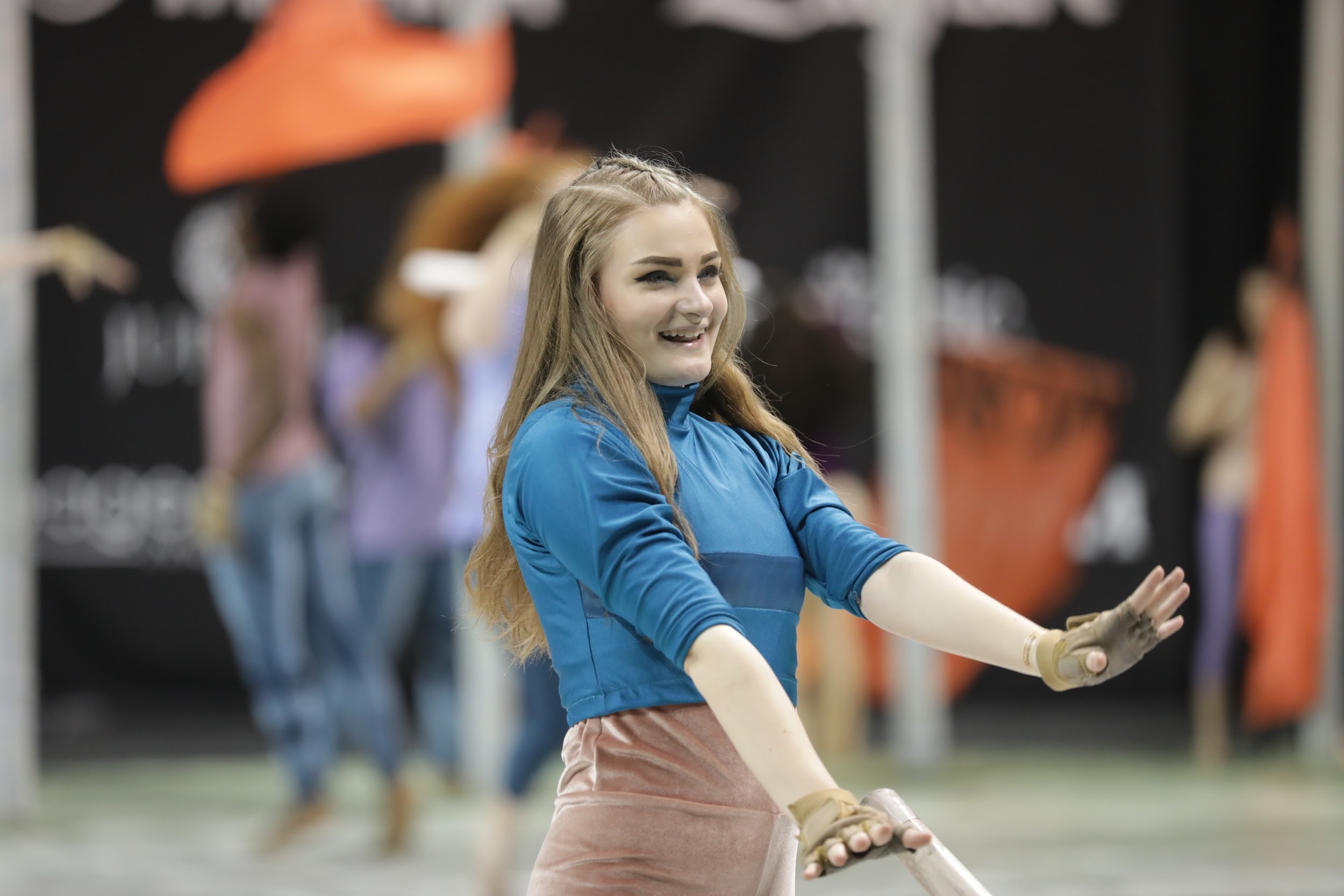 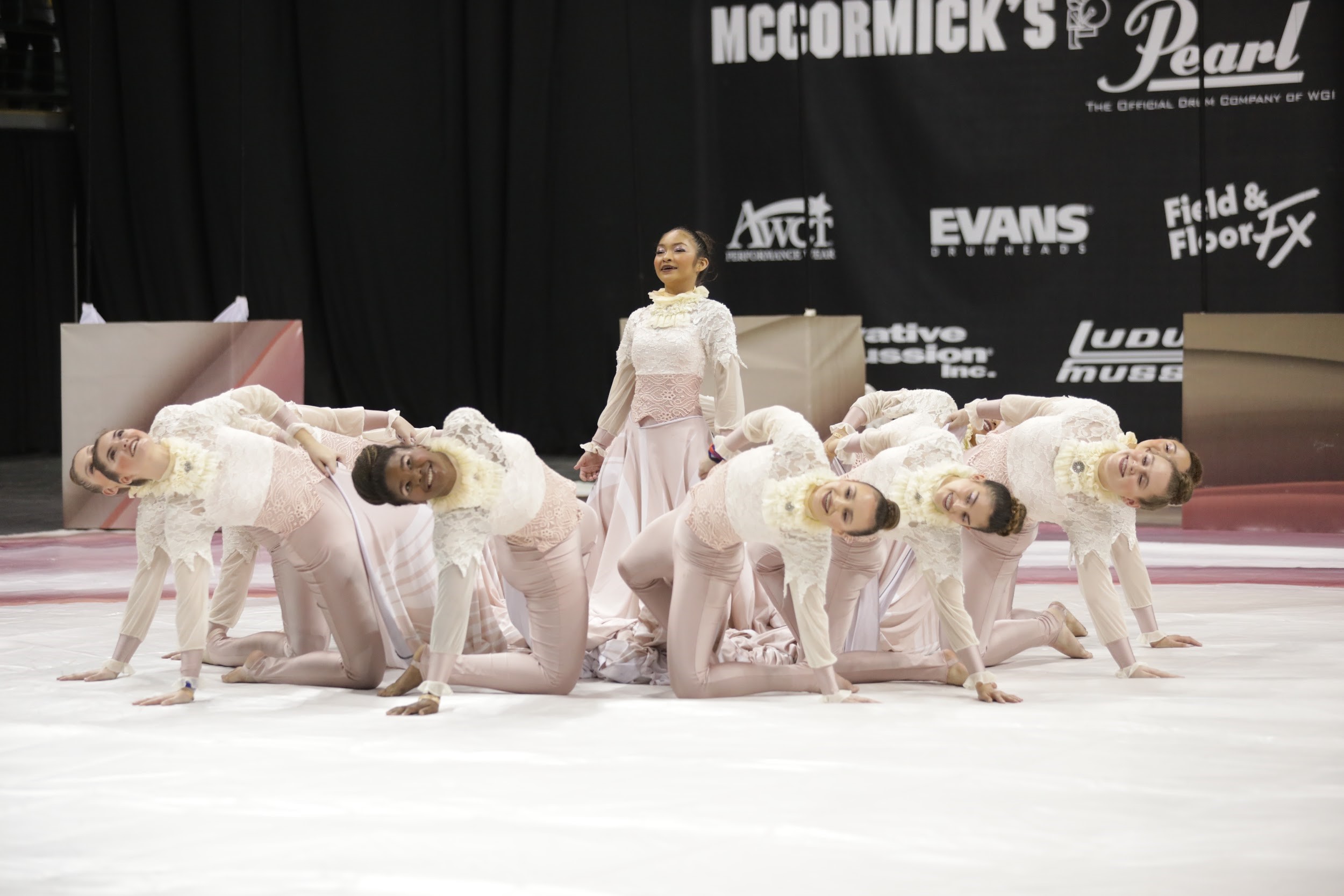 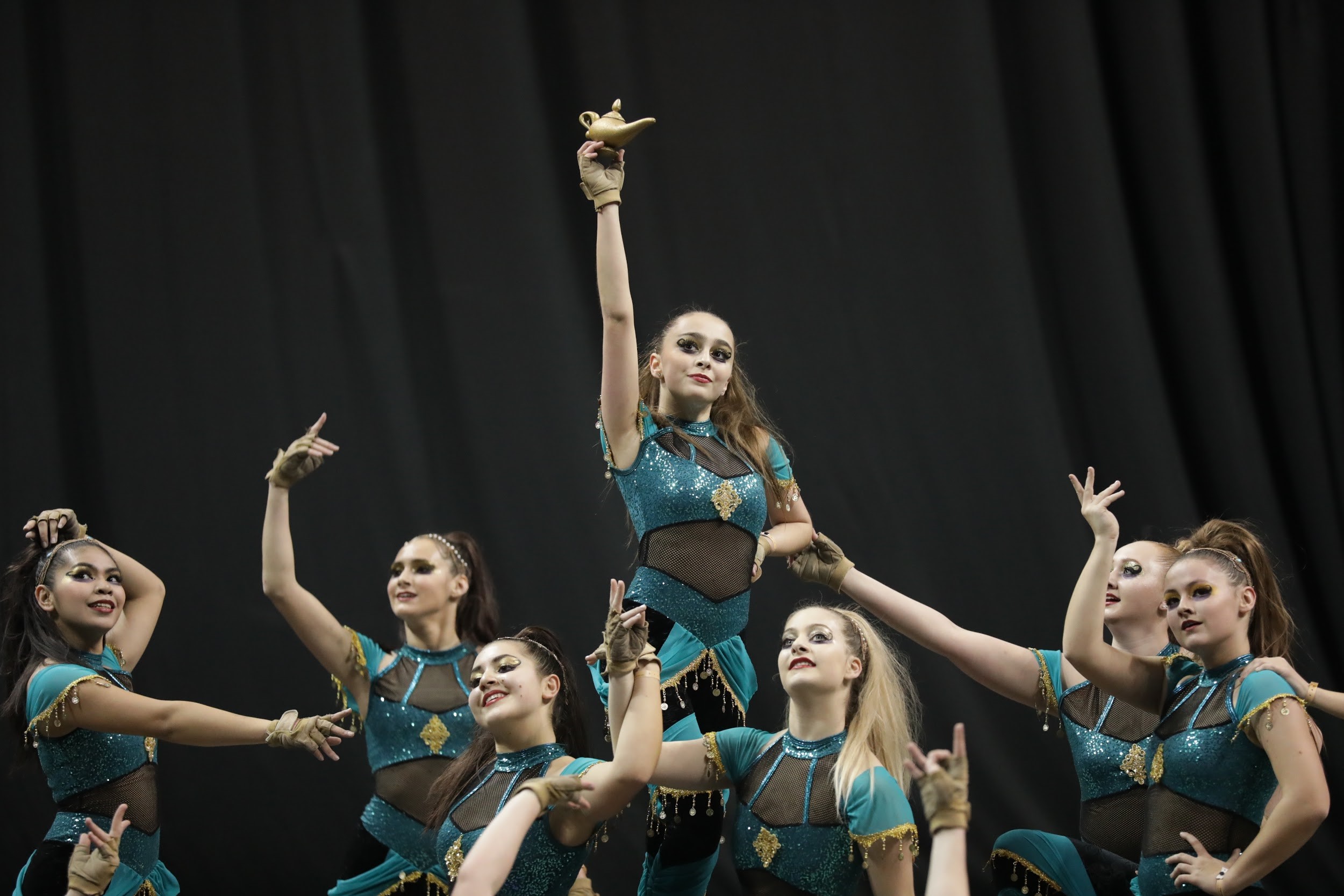 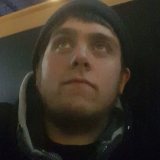 About the Author: Adam Adkins is a freelance writer and editor, web developer and social media specialist located in Dayton, OH. You can read his sports writing at www.AdkinsonSports.com or follow him on Twitter @RealAdamAdkins.