A cold wind clears through the Chino Hills High School parking lot, insisting that its biting characteristics provide an unwelcome inconvenience for all those in attendance, and judging by the capacity of the surrounding region, there are plenty of people gathered inside the warm comfort of the gymnasium.

It is a curious sight to take in, as my previous visits to watch the drumline rehearse on this campus typically results in witnessing some form of musical activity.  Especially in the earliest months of the 2012 indoor percussion season, when the ensemble’s goal suddenly shifted from learning their winter production to saving their band director, Brian Gallagher, from being dismissed by the school district. 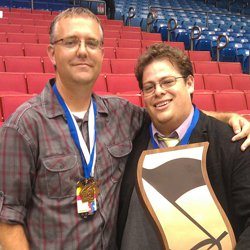 “The first reactions to finding out about Brian’s potential dismissal were shock and frustration, because the situation came at a time when California’s state wide budget cuts were (and are) taking out arts programs and educators in massive sweeps.  But then we were amazed to see the kids and parents come together in support of Brian, and were proud of them for doing the right thing,” front ensemble arranger/instructor Ian Grom states.

The memory of parents and students creating an astonishing number of colorful posters, all with supportive words and slogans in honor of their band director, was a remarkable sight, and it left a significant impression on the staff as well.

“I was completely amazed by everything the band program was doing to help Mr. G. They even made a video where all the kids were talking about how much of an impact he made in just two short years.  Plus, the sticky notes all over his door in the band room was just another sign of everyone bonding together,” Brian Horan, Cymbal Instructor (2008 – 2012), recalls.

“And even though they had to make the decisions based on whatever budget cuts were necessary, Mr. G maintained a positive attitude and his devotion to the various ensembles within the program.”

Minutes later I head into the gym, where the bleachers are packed with family and friends in attendance for the Chino Valley Unified School District Indoor Showcase – an annual public event where the indoor color guard and percussion ensembles from the middle schools and high schools in the district perform their programs one last time.

Following the performance of their fellow World Class competitor, Ayala High School (2012 PSW Bronze Medalist), the Chino Hills Indoor Drumline enters to the sound of enthusiastic spectators.  Their responsive smiles are impossible to miss, and the confidence in their eyes is wholly apparent.

It is difficult to imagine that this moment almost never happened considering the irregular nature of the statewide budget cuts, or any other negative situations that could arise at any second.  However, these were issues beyond their control, so under the guidance of the staff, the drumline pushed forward into the competitive season, earning consecutive victories for their program, “Predictable” – an energetic, risk-taking production focused on the concept of embracing chance instead of conceding to monotonous repetition, or following recognizable trends.

Opposed to the nature of their show title, though, the drumline could not predict the news they received days before an important WGI event. 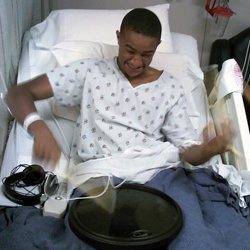 “The week before the Western Championships regional we received the news that our tenor player, Nathan Carroll, was in the hospital and the doctors didn’t know what was the problem. After many tests, there was concern of a possible heart condition, so we told Nathan he would be out for the season.  It was devastating to the members, staff and obviously to Nathan,” battery arranger/program coordinator John Mapes explains.

Such news would prove to be a difficult situation for anyone to deal with, but Nathan chose to remain positive, practicing on his drum pad during his hospital stay in order to maintain his skills.

“While I was in the hospital, I did not intend to discontinue my practicing in hopes of returning, so my parents brought my practice pad from home and I carried on as I normally would.  They have always been the catalysts to my success, and were always there for me at every step with words of encouragement,” Nathan says.

“On top of that, the drumline was definitely concerned and put all of their best into making sure I was well, along with being strong enough to continue without me, and that helped me to understand that in this activity one person can make all the difference”

Following his release from the hospital, Nathan continued to attend rehearsals to help with adjusting drill, running the metronome, or provide motivation for the members whenever the opportunity presented itself.  Actions such as these defined his firm dedication to the ensemble, even though he could not practice alongside his peers during one of the most decisive points of the indoor season.

“Nathan was one of the hardest working kids in the ensemble and it was hard for all of us to have to move forward without him,” Ramis Urribarri, Bass Drum Instructor (2010 – 2012), describes.

“But he encouraged the drumline to be strong and push to the end, because that’s what they had been working for the entire season.  To accomplish the goals they had made together from the very beginning, and hearing those words from someone his age doesn’t happen very often.”

Fortunately, unpredictable elements do not focus on solely undesirable outcomes, as the group finally received a break in their seemingly frequent encounters with bad luck.

“The morning of our last rehearsal before state championships, I received the best news ever: Nathan was cleared by the doctors and was allowed to participate once again,” John Mapes recalls.

“This news was very unexpected and after sitting out for three weeks Nathan showed up, we changed all the drill back to what it used to be, and he jumped right back in like he was never gone. I had never seen a performer so happy to be in rehearsal in my life. The group felt complete and pushed us all into the end of an amazing season.” 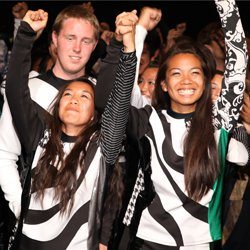 The 2012 WGI Championships turned out to be an unforgettable weekend for the drumline, providing one of the closest races in the Percussion Scholastic World Class category.  No one could accurately predict the outcome between the top two participants, as the Prelims scores separated Dartmouth and Chino Hills by 0.125.  The margin made even smaller at finals when Chino Hills earned 1st place by five-hundredths of a point, capping off an undefeated season.

As one might imagine, presently standing on their home court in light of all the trials and tribulations, in the midst of excited spectators and a dedicated staff, allows the members of the drumline to accept this moment as their own.  And it is well deserved, as so often the general assumption of a top-scoring ensemble is that the ride to the top is an easy process, but the courage and perseverance of the 2012 Chino Hills Indoor Percussion Ensemble is incomparable, just as it is unpredictable.

Especially during an improvised District Showcase performance moment where the front ensemble casually removes sunglasses from their mallet bags while their drum set player slips on a white blazer reminiscent of the one Rick Astley wore in his music video – an action that was not originally programmed into the show – seconds before the drumline resumes the memorable “Rick Roll” sequence.

The crowd’s response is deafening, stretching well into the segment’s final moments as the sampled Rick Astley lyrics sing:

In respects to the Chino Hills Drumline these words apply all too well, facing the season’s most challenging moments as a family, never giving up on one another and never letting each other down.