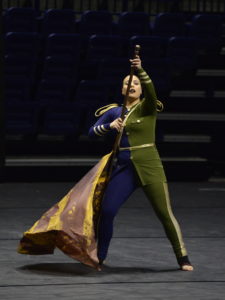 It’s a busy day for the Pegasus organization with Finalists in all three Independent classes! Wearing military costumes of half navy blue and half olive, UCF Pegasus Open (Fla.) (Gold Medal- 97.90) were two warring factions in “Sit Down.” A large white table in the center of the floor was like the elephant in the room for much of the program, as members tossed rifles and spun two distinct quasi- national flag designs around it, but never actually sat to talk. Rifles were the only equipment used for the first half of the show. The guns were eventually put down and the two sides met at the negotiating table to attempt a peaceful resolution.

Set in the winter time mountains of 1850s rural America with a set that had a log cabin and leafless trees, CGT Denton (Texas) (Silver Medal – 96.90) performed “Jacob’s Dream” to the song of the same name by Allison Krauss. As the lyrics described two young boys who got lost in the woods, the guard, outfitted in pioneer clothing, portrayed the search with lanterns, and ultimately the sorrow when the two were found dead in the cold. A haunting flag feature utilized silks in shades of pink and lavender, except for two males in white with white flags representing the two boys.

The Brigadiers (N.Y.) (Bronze Medal- 95.60) provided their own soundtrack for half of the program “From Behind the Wall.” Members sang about the plight of those suffering abuse at home with amplification from speakers on either side of the floor. Deciding to leave a bad situation, a long banner reading “I’ll Find the Strength I Have Never Known” moved forward as strains of Prayer by Kesha began over the arena sound system. A purple domestic violence awareness ribbon appeared on the tarp and flags as the guard showed support for domestic violence survivors. 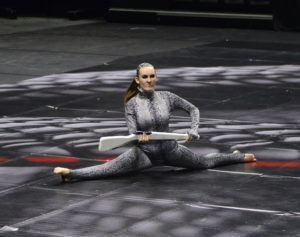 A snake charmer seated on the floor evoked the performers for Reverie (Ga.) (4th- 94.35) in “Charmed.” Members slithered from large baskets and underneath the tarp to a program set to percussive Indian tabla music. With the guard in grey snakeskin bodysuits and spinning green and burgundy snakeskin silks, their enthralling work had us in a trance. A long black and yellow snakeskin fabric was pulled from the charmer’s basket, swallowing the entire ensemble except for one lady who emerged wearing a new green snakeskin after shedding the grey.

A large woven dreamcatcher on a cloudy nighttime tarp clued us into the concept for ORIGINS (Texas) (5th- 92.85) in “Where Dreams Begin.” Motifs from Twinkle, Twinkle, Little Star underneath Sweet Dreams (Are Made of This) provided an unsettling quality as the members representing the Sandman spread glittering confetti of silver, fuchsia, and other colors on the floor. When it was all said and done, the floor sparkled nearly as much as the members’ equipment skills. The members lay blissfully down to sleep at the conclusion.

George Mason University Winterguard (Va.) (6th- 92.45) performed “Cheval de Carrousel” on an elaborate floor resembling an ornate Persian rig with a large spinning carousel in the middle. Wearing green costumes with horseheads on the front, the unit had a look of refined elegance. Solid gold flags and intricate equipment work over a piano soundtrack provided an atmosphere of formal artistry as the spinning carousel, resembling a large lazy susan, turned throughout the program while members moved and spun on it. 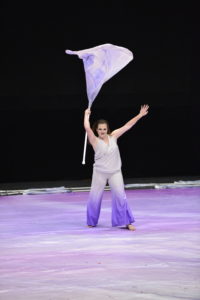 With “Under a Lilac Tree,” Paramount Open Winterguard (Ga.) (7th- 90.80) literally gathered under the branches of a large metallic tree in the back corner of the floor. At various points, members lay in lines resembling branches. Set to Lilac Wine with a pastel palate of lavenders, pinks, and blue-greys, the equipment work was spot-on, giving the troupe a clean look. The show concluded with members gathering on the opposite corner from the tree in a group pose sculpted to look like a mirror image of the prop.

Independent Open Fan Favorite FIU Winterguard (Fla.) (8th- 90.65) grabbed our attention before their show even started! “Tambora,” named after the Indonesian volcano which produced the largest recorded eruption, featured vivid red, orange, and yellow patterns on tarp, costumes, and backdrops. Once the jungle-inspired soundtrack began, the choreography, flying weapons, and flag work in silks matching the pattern on the floor was thrilling. A closing feature on volcanic flame inspired flags was truly en fuego!

Vox Artium (Calif.) (9th- 90.50) masterfully pulled every ounce of passion and anguish out of Patti LaBelle’s soulful “2 Steps Away.” With a palate of grey, gold, pink, and shades of lavender, the unit gave an air of defiant hope in the face of trials of love and life. When the entire guard picked up rifles complete with a sky high toss that seemingly was going to hit the overhead jumbotron, then followed that with a superb feature on cream and light pink silks, they had us eating out of the palms of their hands!

Legacy presented by Carolina Gold (N.C.) (10th- 87.85) made it through trouble with flying colors in “Weather the Storm.” Set to Everything Must Change, the group dealt with change in a positive way depicted with color additions as the program progressed. Performed on a grey stone floor with members clad in black, the show went from dreary greys to a rainbow of hues as costumes and silks ranging through the color spectrum made for an optimistic conclusion, proving change can be good. 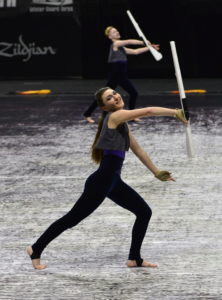 Avidity Independent (Mo.) (11th- 87.20) opened their program “With Stand” with narrated lyrics of the classic song Stand By Me. Weapons duets and trios drew cheers from the crowd, and high rifle tosses with solid spinning on silks in shades of pink, lavender, and yellow earned a hearty reaction also. With the narrated lyrics interspersed throughout the show, the people certainly did stand by them after an exhilarating feature with bright orange and yellow silks metaphorically brought the house down.

The District Independent Presented by Etude (S.C.) (12th- 86.55) brought the magic of Pinocchio to Dayton with “Woodwork” to the song of the same name by Sleeping at Last. Performed on a hardwood floor tarp, a member dressed as a wooden puppet sat on a workbench as Geppetto put the finishing touches on him. A wish was granted, and soon Pinocchio was dancing and spinning with glee. Wood was a common visual motif, as planks were utilized in choreography in addition to the tarp and flag design.

Alta Marea Winterguard (Ala.) (13th- 85.95) brought a welcome message in these unsettled times with “The Light of the World.” Performed to a touching version of What the World Needs Now, the women utilized illuminated globes, changing the visual texture by moving them around the floor as the program developed. The point of love and acceptance was further driven home at the ending when the globes were placed in a heart shape, illustrating now more than ever, we need to spread a little love around. 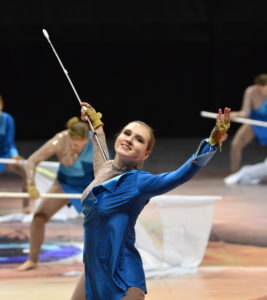 The Pride of the Netherlands (14th- 84.75) dealt with the timely topic of immigration in “More than Minuses,” performed on a floor that was a composite photograph of faces representing many ethnicities. Opening words of a native-born worker fearful of lost jobs moved into a look at the subject from a different perspective, concluding that we all have the same aspirations no matter where we’re from. The voiceover summed up the program with “Most times immigrants bring more than minuses.”

Winter is finally over! Legacy Performing Arts (Ind.) (15th- 84.40) opened “Begin Again” wearing brown tops, but shed them for shades of pink as members bloomed in front of us. A green patch of Astroturf soon became nine patches as if a grassy meadow grew before our eyes. Spun to First Days of Spring by English band Noah and the Whale, floral silks gave a refreshing springtime feeling. A lush closing carnation flag feature “blossomed” on the floor, earning a great crowd reaction.