As Lauren Gary, an alumnus of Fantasia Winterguard prepared herself to enter a pep rally in the gym, she made sure her red and black costume fit just right. When Lauren entered the gym she was not greeted by high school students. Instead, cameras, lights and banners that read McKinley High School surrounded her. As she stood at her opening position, Heather Morris and Becca Tobin stood only a few feet away about to perform alongside her. Lauren was on the set of Glee.

“I have been extremely fortunate to work with Scott Chandler for the last four years of my performance career,” said Lauren.  “The funniest part about working with Zach is how excited he’d get when we’d do the simplest things, like spins! His mind was blown away every time!”

With over 40 color guard peformers auditioning, only 14 color guard members made the cut to appear on Glee. The production took place within a two-day period. On the first day the members met at Paramount Studios in Hollywood on stage 27. Scott and Zach were there to greet them along with the Cheerio dancers of Glee and 14 air blade rifles.

The production was choreographed to “Hold It Against Me,” by Britney Spears, which came together within a matter of hours. The color guard members received a true taste of how fast paced TV Hollywood could be. By the end of the rehearsal Heather Morris (also known as Brittany S. Pierce on Glee) showed up to the studio only to be blown away by the color guard’s talented spinning capacity. 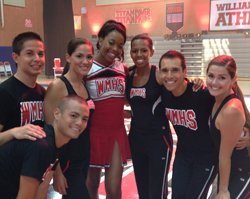 On day two the Glee color guard members arrived on the set of McKinley High School’s gym and hallways. “Being on the set of Glee, I felt like I was a kid walking into a toy store for the first time. Everything felt larger than life,” said Angie Vargas a long time member of Corona Winterguard.

Production trucks, star wagons and camera equipment surrounded theGlee color guard. They were greeted by the full star treatment with hair, makeup, their own star wagons, and a gourmet buffet lunch.

When the time came to bring the color guard’s spinning skills in front of the camera they were dressed in McKinley High Schools’ black and red colors. Next to them stood the MHS cheerios with Brittany and Kitty. The gym was filled with lights, cameras, production staff and McKinley Titan mascot posters on the walls. The head cheerleading coach of Glee was also on the set.

“I will never forget meeting Jane Lynch (known as Sue Sylvester on Glee) and having her tell me that what we do is ‘amazing’ and that we gave her ‘chills.’ I still can’t believe that happened,” said Robert Morales a member of Fantasia Winterguard. 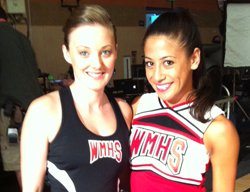 The filming crew and director stood in awe of the colorguard member’s talented spinning capabilities.   Once the camera turned on, the members surely felt this was no ordinary color guard performance. The Glee color guard performed their routine with the Cheerios many times. The production crew wanted to capture every single moment the dance routine had to offer. By the end of the night the team successfully completed a full day of shooting.

The guard members stood in utter disbelief about what they had just accomplished. The color guard felt honored to be chosen to represent their color guard activity on national television. “I am extremely grateful to have experienced Glee myself, and I am also excited to see what will come of it,” Said Lauren. “I never thought in a million years I would get a call to do something like this, my dreams in the color guard activity have been fulfilled completely.”