A total of 27 lines competed in Independent Marching A Prelims, with the following 15 lines advancing into Finals. 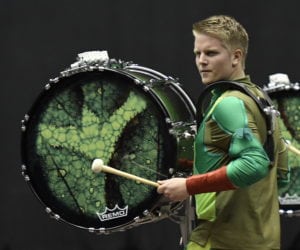 IMPACT Percussion (Gold Medal – 95.300) commenced “Into a Rose” as a bud waiting to turn into something grand, the members dressed in the green of a rose’s stalk and stem. Backdrops of green were introduced as more leaves sprung forth to soak up the sunlight needed for the rose to fulfill its destiny. As the narrator commented on a new life emerging, the drummers pulled back their sleeves to reveal small patches of red on their wrists. The backdrops revealed images of red roses, the transition now complete as the rose basked in the shimmering glory of its final form.

“Geppetto’s Workshop” of Unity Percussion (Silver Medal – 92.375) followed a day in the life of Mister Geppetto, the elderly woodcarver who created the puppet Pinocchio. This show was a perpetual motion machine of activity, with the toymaker toiling long hours to practice his craft. But when he did finally kick it for the night, the toys came alive and got into a little mischief, being that they had waited all day to shake off their sawdust. At the end, Geppetto came back and caught the toys in the act, the toys responding with a, “Who, me?” demeanor that didn’t fool the storied craftsman.

FIU Indoor Percussion’s (92.313) “Immortal Masquerade” was performed to the sounds and sights of a masked ball, the members disappearing into the characters behind their masks. What were the real personas of the members? Were the identities really closer to what the actors in the masquerade were attempting to suppress, or was the entire world truly a stage and everyone an actor? We never really found out. The beauty of the show was we were left to make our own conclusions, and no one’s opinion was neither right nor wrong. Or maybe not. 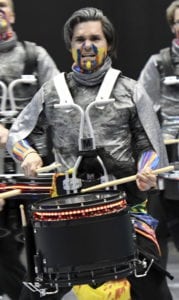 Even though the members of Railmen Indoor Percussion (4th – 91.225) performed with covers over their mouths, the “Muted” show was in no shortage of drumming. The bland grayness of the four podiums faded when turned around to reveal brightly colored stripes, leading the way to a happier sense of being. Music became increasingly vivacious as two long banner flags of psychedelic colors, accompanied by the sudden appearance of different colors of lights on the drums and mallet keyboards. They concluded the show with a sense of irrepressible delight.

Farmington United Percussion Ensemble (5th – 91.075) opened the “The Factory of Obsolescence” with traditional rudimental drumming that gradually evolved to the myriad styles of today. Stationary “pit” percussionists wore white lab coats as if they were scientists directing the evolution of the drumming; all this as members of the battery percussion were evaluated for preparation of the coming system upgrade. The closing music turned techno as each section of the ensemble went through its upgrade, enhanced with colored lights on the costumes.

Draped in plastic see-through jackets, Paradigm Percussion’s (6th – 90.838) “Plastic” opened with Boomwhackers playing the melody of “Hall of the Mountain King.” Accouterments of plastic items, from a plastic storage crate to a plastic “rubber” ducky and an inflatable dinosaur, enhanced this thoroughly delightful show. Clearly, despite some serious drumming of a high caliber, the intention of this show was for everyone to just have fun, from the performers to the audience. Few shows left people with a smile on their faces from ear-to-ear as much as this production.

With a primitive hunter-gatherer vibe expressed in the props and sets, as well as the Native Americana of the saw-tooth floor design, East Coast Percussion‘s (7th – 90.813) show explored the unseen fears of the night as well as the bountiful harvest of one’s continued toil. Throbbing native hand drums further drove home the sense that this show referenced the trials and tribulations of America’s earliest inhabitants. 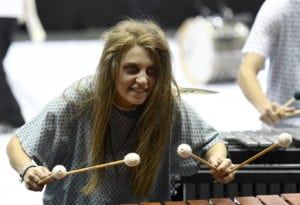 For the first part of their “Sane” show, the members of Vegas Vanguard (8th – 90.763) each played with one arm; the other arm restrained by the confines of the straight jackets worn by the members of the battery, who also wore restraints over their mouths so they wouldn’t bite the members of the front ensemble, who wore simple institute smocks. The features of each section of the ensemble were accompanied by tortured contortions, ending with the members ripping off their masks. The show ended with the members on the floor, leaving more questions than answers.

With the suggestion of an oil derrick looming over the tainted sands of the American west, G2 (9th – 88.413) explored how the oil of “Crude” was king of the nation’s developing Industrial Revolution. A long black streamer wrapped around the drums, reflecting how oil had become as much a curse as a blessing, with a disjointed voice commenting, “The oil took some of our best men and made them into monsters.” Drumming became more frenetic as greed took over, a black scrim of oil covering the line with the shame of avarice as the individuals chased the almighty dollar.

With a carefully raked sand garden as a floor, Saints Percussion’s (10th – 87.950) “Zen” didn’t tell a story as much as it created an attitude of one with the universe. Mallet parts re-created the whole tone essence of Southeast Asian music, offering a sonic landscape that was relaxing to the ears and the soul. A little bit of tai chi martial arts added to the mood, the tranquility of the entire show belying the fact that there was a great deal of impressive drumming going on while the line was seeming to bliss out to the calling of an astral plane.

“Chronos” of Nomad Indoor (11th – 85.163) went deep into antiquity to discover the motivation of the personification of time in ancient philosophy, reminding us of the theme with alarm bells and a sounding of the Big Ben chimes. The mythological essence of Chronos, heard as a menacing voice that was as demanding as it was eerie, was all-knowing and all-encompassing, and was certainly not willing to cut anyone any slack. Seen as much as inevitable as a burdensome force, we were reminded, as the contemporary saying goes, “Time waits for no one.” 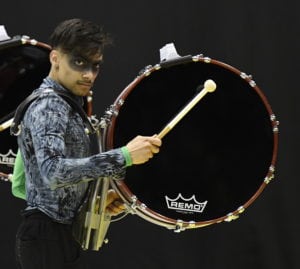 Weather has certainly been something we’ve been hearing about more and more, and Crossroads Percussion’s (12th – 85.075) “Weathered” dealt with the natural disasters that have affected the ensemble’s state of Iowa and the psyches of the residents. At first focusing on the mass destruction, the show evolved into the grieving process and how the residents come together to rebuild and make their communities and lives stronger, with renewed hope for a better tomorrow.

Exploring the innocent fun of children’s games, Lake Effect Percussion (13th – 84.925) performed “Ring Around the Rosie,” with a small revolving merry-go-round platform utilized by various sections of the drum line, as well as dancers. But as innocent as the concept of the show may have sounded, there was also a darker side to the production, harkening back to the origins of the title song as a reference to the scourge of the Black Plague, with the sailing of a black silk across the floor leading to the members succumbing to the disease.

Exploring the innermost thoughts of creativity, the “Letters to a Young Poet” show of Shadow Indoor Percussion (14th – 84.438) delved into the angst of people who freely pour their souls onto paper, and how they deal with a critical world that frequently doesn’t understand them. Such vulnerability brings about self-questioning and second-guessing, heard not only in the narration, but also in the tenderness of the music, which struggled to maintain a sense of dignity while dealing with negative thoughts as expressed in the minor key of the melody.

For the first minute of “Breaking the Silence,” the mallet keyboard players of Huron Valley Percussion (15th – 83.375) played their instruments through black covers, dealing with the restraints of imposed silence. But soon after the covers were removed, the black robes of oppression also came off as segments of the black floor revealed bright and happy colors. The silence broken, the members freed from their prison of muted expression, the show ended with a celebration for the independence that came with not having to be silent any longer.