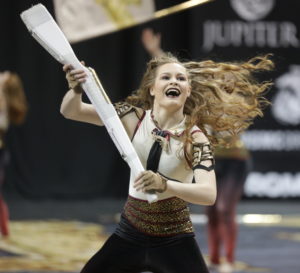 Leander High School (Gold Medal – 99.400) in their first trip ever to WGI World Championships won the Scholastic A division! A floor of ornate but empty frames formed the backdrop of “Reflections,” set to the song “Man in the Mirror.” Performers wore beautifully intricate bodysuits and danced with mirrors to show the importance of looking within themselves to make change possible. However, the flawless perfectionism of Leander High School’s equipment work and superb quality of movement certainly led to the standing ovation that began before the show had even concluded and left no one in doubt of who were the Texas belles of the Class A ball.

Utilizing strips of floor as railroad track pieces, Marian Catholic High School (Silver Medal – 96.880) embodied a steam engine in their show “Locomotive.” The conductor-like uniforms and syncopated arm movements and shuffling footwork combined with the steam whistles on the soundtrack for an impeccable experience. Clean hits and a commitment to character (even if the character is a machine) definitely made the audience jump on the train to support this Illinois group.

“Light of Mine” proved that we are all made of stardust indeed. Indiana’s Decatur Central High School (Bronze Medal – 96.460) took a celestial approach to the concept of “this little light of mine” with their black and blue floor with a large star which complimented the performers’ blue and white uniforms. The show focused on the light inside each person, and during the show, a light illuminated on each performer, right over her heart, as a reminder that we must let our light shine.

Green Hope High School’s (4th – 95.790) show title “Amor Immortuos” translates as immortal love. Performers exuded a vampire-like stillness and sense of purpose, especially given the flowing overcoats at the beginning of the show. The silver and black damask floor and black chaise props added to the air of elegance.

California’s Clovis High School (5th – 94.475) presented “Nocturne,” a study in things that creep in the night. The black uniforms contrasted well with the misty evening scene on the floor. Performers adopted a disjointed, slithery quality of movement that perfectly fit the soundtrack and theme. 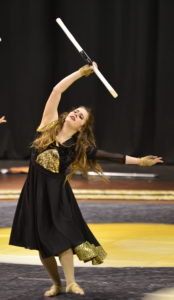 The vintage movie camera allowed for an almost meta-analysis in Keller High School Varsity’s (6th – 94.275) show “Just Like a Movie.” A roll of film with stylish gold scrolls adorned the floor, and flags continued the movie theme with motifs like film strips. Chic performers “turned it on” when in front of the camera and acted more reserved when behind it. Keller High School was definitely a movie most in the audience would love to rewatch.

Newsome High School (8th – 93.135) guard members donned gold stars on their uniforms in “The Black Hole: A Star’s End.” A large black hole prop featured prominently on their galaxy-themed floor, and as performers “entered” the black hole, they covered their star, symbolizing the star’s death. The show concluded with all performers being absorbed by the black hole. This creative use of the prop along with their hard hits most assuredly helped the guard win Fans’ Favorite.

The audience witnessed a coven meeting in “Esbat Rite.” Colerain High School (9th – 92.270) performers were dressed in white dresses and had an exceptionally clean run that allowed them to move up two places from their 11th place spot after semi-finals. The floor featured a full moon, and dead trees were eerie props that also nodded toward the Wiccan influences alluded to by the show’s title.

Billerica Memorial High School (10th – 92.225) presented “You Never Show All of You.” The floor began with a crescent moon that grew to almost half, peaked at full moon, and again waned into a crescent. Elegant equipment work and white and silver dresses completed the lunar ambiance.

Combining the iconic image of Fearless Girl, the bronze statue of the girl facing the Wall Street bull, on their floor with the anthem of the Women’s March as their soundtrack, Lake Howell High School’s (11th – 91.480) “Quiet” showcased female empowerment and purpose. The performers’ burgundy body suits and not-quite-pink ending flags reminded the audience of the larger movement without being overt. With sharp hits and inspiring voice overs by Michelle Obama, this performance by the Florida group certainly inspired the audience. 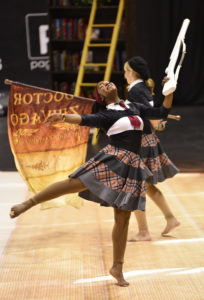 California’s Rancho Cucamonga High School (12th – 90.475) made nerdy look so classy in “Between the Lines.” The large open book covering the floor provided a clear focal point while the table littered with books and bookcases with ladders made the area feel like a library. Uniforms resembled private school garb with skirts and sweaters in rugby stripes, and the flag sequences with a book in one hand shone.

For the first time, A.A. Stagg High School (13th – 89.715) made Scholastic A Finals, and their clean run allowed them to move up a spot from their semi-finals position in 14th place. “She Was…” presented the story of a brave girl and the boy who was initially afraid to swim but figuratively dove in after her. The floor mimicked a small beach and ocean. The male performer dressed for a day at the beach while the siren-like females wore aquatic blue bodysuits completed by an ocean wave fin trailing off one arm.

Cumberland Valley High School (14th – 89.330) utilized parts of their floor as a chalkboard for an isolated performer to write words like lost, empty, broken, and alone in their show “You Will Be.” Other performers erased those words, and by the end of the show, the performer symbolically descending into depression had been “found” and included within the group.

In a show inspired by the Broadway hit “Waitress,” New Jersey’s Southern Regional High School (15th – 88.700) presented “Table for One.” Bright red and turquoise waitress uniforms harmonized nicely with the red retro stools which were props used throughout Sara Bareilles’ haunting “She Used to be Mine.” The guard perfectly balanced the sense of loss and dim hope so prevalent in the song, and equipment work integrated beautifully with the props.

Father Ryan High School (16th – 88.315) didn’t need a floor with their minimalistic approach to “Imagine.” Combining the song by the same name with excerpts from “Jesus Loves the Little Children,” the Nashville-based group created a motif of red, yellow, black, and white that extended to their flags and weapons. Turquoise uniforms and a series of props (including red, yellow, black, and white rope pulled across the performance area) helped tell the story of how “the world will be as one.” 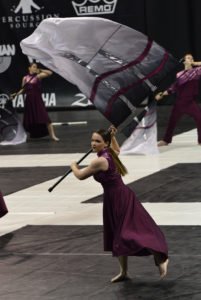 A white hashtag grid was the only floor used in “The Mirror.” An empty frame stood for the titular prop, and symmetrical equipment work abounded in this show skillfully performed by Middletown High School (17th – 87.805).

Northwest Cabarrus High School (18th – 87.040) used a black and white floor with a mountain image to create the backdrop for “Back at My Cliff.” The teal uniforms popped on the monochromatic tarp, and a single ladder allowed for additional layers during equipment work.

An elegant compass adorned the floor of Cary High School’s (19th – 86.620) performance, and green, gold, and black uniforms added to the ambiance of sophistication. “Somewhere Only We Know” outlined a quest for understanding and companionship while flags echoed the theme of a journey.

Westwood High School (20th – 86.040) looked like dolls in a Raggedy-Ann-like setting with a floor resembling Grandma’s woven rug and an oversized rocking chair and lamp. The Texas guard utilized the chair for several dance sequences and tosses in their show “A Place for Us.”

A series of ornate, gilded mirrors formed the floor for the show “Looking Too Closely.” Damonte Ranch High School’s (21st – 85.580) black and gold uniforms continued the luxurious mood even as the performers struggled with issues of self-image, according to the soundtrack. Eventually, their pride and self-confidence won out, not just in the powerful equipment pushes but also in the lyrics: “I know you struggle sometimes, but you are beautiful.” 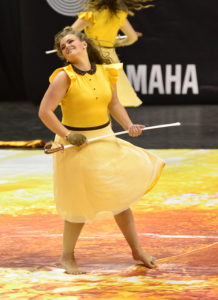 It certainly didn’t feel like spring when Fort Mills High School (23rd – 83.925) took the floor. “When I Was Younger” described a woman in her autumnal years thinking back on a past love. The floor showed a beautiful fall forest with orange, yellow, red, and green leaves which were echoed on the flags. A bench and baskets completed the picture, and leaves fell like confetti several times, adding to the crisp autumn feel of the show.

If guard dads wearing purple camo pants wasn’t enough to make you love Lockport Township High School (24th – 83.765), then their show “Purple Rain” would do the trick. The black floor framed by tall umbrella props set the stage for purple costumes and a stage-stealing guard guy (work it!). The audience loved the finale which included purple petals raining from a central umbrella.

Flushing High School (25th – 83.410) presented a retelling of “The Ugly Duckling.” Their floor pictured a pond, and props included tall reeds to surround it. Performers wore yellow and gold except for one solitary gray dress, the ugly duckling. The yellow ducklings excluded and taunted the gray duckling until she removed her gray overdress revealing silver sequins beneath as white feathers fell. In the final flag hit, the ugly duckling is not only included but also on the front 50.

About the Author: Haley Moore is an educator, supporter of the arts, and former WGI member.