The Fox hit TV show, Glee, has asked several color guard members to return to the set to help film an episode in their final season.  (Read about their first experience on set here.) It was their turn to perform as members of Vocal Adrenaline show choir competing at Sectionals. The color guard was made up of 4 members (Lexie Estudillo (Fetty), Chris Cordova, Samantha McMane, and Juan Echavarria). Lexie was contacted in early February to put a color guard together. She only had three days to make it happen, “Of course the first person I called was my best friend Chris.” 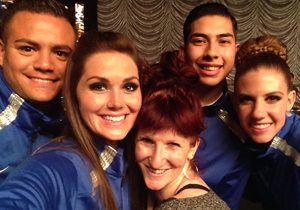 This time around was a bit different than the first two times they filmed. Lexie mentioned, “In the past, we had our choreographer, Scott Chandler, with us who relayed any information we needed. Because the group and piece we were in was so small, we weren’t given a choreographer. This kept us on our toes and made sure we were in the right place at the right time. This time it was easier making our way through paramount studious from our trailers and the multiple sets because we were more familiar with the studio’s layout.”

Glee choreographer and WGI “Day After” Clinic guest, Zach Woodlee, helped detail what they needed in the performance. “He played “Hey Mickey” for us. He then asked, “Okay, what can you do?” We started with a simple 8 counts and he said he wanted something to go in the air on count 8, so we added a toss. He asked us to do tricks, so we did an exchange and he loved it and had us put it in. It was a collaborative process, but mainly whatever “impressed” him was what we choreographed! It was pretty funny that the end result of choreography wasn’t very challenging in our eyes, but everyone who watched was blown away!”

The group rehearsed for 2.5 hours Friday, and filmed 16 hours Saturday and 12 hours Monday. “The reaction of the rest of the cast was always incredibly warm and supportive,” says Lexie. “At MANY points in the filming process, different actors/actresses/performers/directors asked if they could try spinning our flags. We had the stars tossing singles with pretty decent technique. We were given many compliments and the directors continually expressed how grateful they were to have us.”

The guard members also got a little acting time without their flags. “There was also a section of the episode where they filmed us in the audience “reacting” to our competitors (William McKinley Glee Club, and The Falconeers) performances. We were placed in the front row, next to the stars, right in front of cameras and weren’t given any direction before they said ‘Action!’ It was fun to act/perform as those Vocal Adrenaline characters without equipment in our hands!”

“Overall it was a great experience getting to perform on Glee as many times as we did,” says Lexie. “We are grateful we had the opportunity and will miss the show once the series ends!” Tune in to Fox on Friday, March 13th to watch their performance and find out who wins at Sectionals! 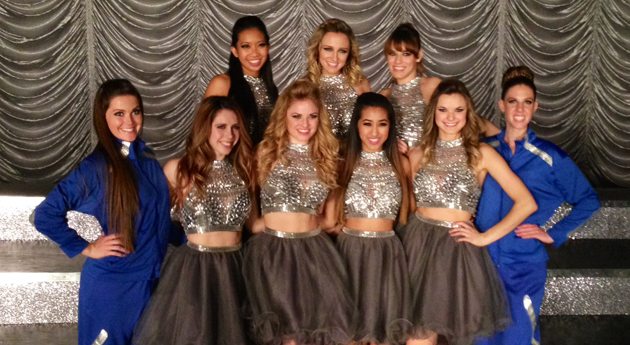